By Roger Heinrich
Other articles in Governmental Entities and Activities 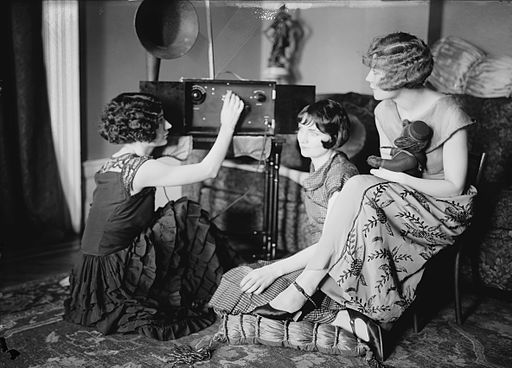 Radio broadcasting began in the U.S. around 1920, and at the time of this photo, radio listening was an exciting new high-tech pastime. However, so many stations were operating on the AM band that cross-talk and interference were causing almost unbearable conditions for broadcasters and radio listeners alike. The Federal Radio Commission was established to restore order by assigning frequencies. The FRC was later replaced by the FCC. (Photo by unnamed photographer for Bain News Service in the Library of Congress, public domain)

The Federal Radio Commission (FRC), born out of the Radio Act of 1927, was conceived as a separate regulatory body for radio communications.

Composed of five commissioners appointed by the president, the FRC was granted the authority to assign specific frequencies to broadcasters and to deny license applications when the radio spectrum had no room for additional broadcast stations. Thus the commission arguably illustrates how government intervention may sometimes be needed to enhance First Amendment freedoms.

AM radio spectrum filled up in the 1920s

By the mid-1920s, so many stations were operating on the AM band that cross-talk and interference were causing almost unbearable conditions for broadcasters and radio listeners alike.

Although the Radio Act of 1912 had authorized the Department of Commerce to issue radio station and operator licenses, the federal courts had ruled several times that the secretary of commerce had no authority to stop issuing licenses once the AM band was full. Broadcasters petitioned the federal government to intervene and restore order. Congress responded to these demands with the Radio Act of 1927.

FRC restored order to AM spectrum

The commission sent comprehensive questionnaires to all broadcasters designed to elicit information, especially about their record of public service and their plans for future public service. It held public hearings to determine how best to eliminate station interference from other signals. The commission decided that each radio station would be separated by 10 kilocycles. The commission also granted temporary permits to all broadcasters who had been issued a license by the secretary of commerce under the Radio Act of 1912.

In a few years, order had been restored to the AM spectrum.

The commission created several classes of stations with varying levels of transmitter power. Some stations were restricted to low transmitter power and were licensed to share their frequencies with other broadcasters. Others were designated as daytime-only stations. And still others were allowed to broadcast alone on a frequency (clear channel) with high-power transmitters.

The FRC was replaced by the Federal Communications Commission (FCC) with passage of the Communications Act of 1934. The FCC, unlike the FRC, was commissioned as an independent regulatory agency, with its jurisdiction extended to include long-distance telephone and all nongovernmental uses of the radio spectrum.

This article was originally published in 2009. Roger Heinrich is a professor in the Department of Media Arts at Middle Tennessee State University where he teaches media law. He spent 26 years working in the broadcast industry, both in radio and television.