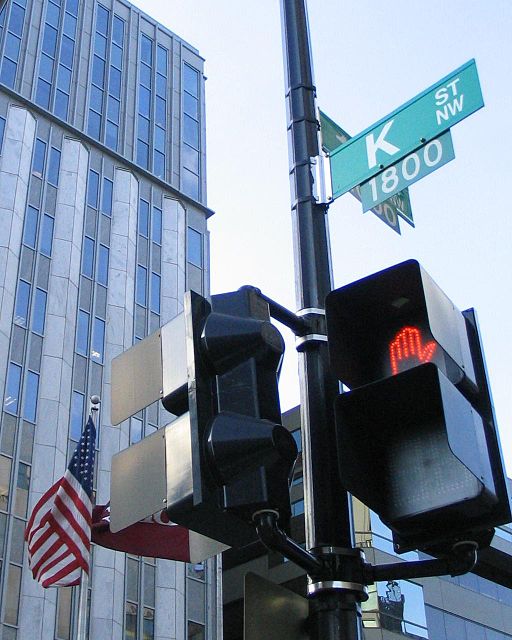 The Supreme Court in 1954 upheld a federal lobbyist law that required reporting to Congress in United States v. Harriss. Although Chief Justice Earl Warren said the law could deter some speech, the restraint was too remote to require striking down the statute. (Photo of K Street NW at 19th Street in Washington D.C., part of downtown Washington's maze of high-powered lobbyists and law firms. Taken by User: Erifnam on Feb. 23, 2005, CC BY 3.0-SA.)

In United States v. Harriss, 347 U.S. 612 (1954), the Supreme Court found constitutional the Federal Lobbying Act of 1946, the purpose of the which was to enable Congress to know “who is being hired, who is putting up the money, and how much.”

A U.S. district court had invalidated the act after it was applied to the National Farm Committee and to Moore and Harriss, individuals attempting to influence legislation that would raise the price of agricultural commodities.

The Supreme Court based its decision on an interpretation of the act that made it applicable only to individuals who solicited, collected, or received contributions for the purpose of influencing congressional legislation through direct contact with its members.

Chief Justice Earl Warren wrote the Court’s decision, which relied in part on United States v. Rumely (1953) and construed lobbying in “its commonly accepted sense” rather than interpreting it to apply to activities having only “an ‘incidental’ purpose of influencing legislation.” So construed, the act did not violate the First Amendment.

Warren: Law could deter speech but restraint too remote to justify striking down the law

Chief Justice Warren went on to note that although the actual wording of the statute hypothetically might continue to deter some speech, “the restraint is at most an indirect one resulting from self-censorship” and “too remote to require striking down a statute which on its face is otherwise plainly within the area of congressional power and is designed to safeguard a vital national interest.”

The Court determined that it would resolve additional questions about penalties under the law if and when such penalties were assessed.

Dissent argued that the law's language was too broad

The justices argued that the Court’s attempt to save the law posed more dangers than the legislation was worth. Justice Douglas observed that it was particularly important for criminal statutes to be narrowly drawn so as to give individuals fair warning, and he and Justice Black believed that the Court had distorted the meaning of the words in the statute and that its language remained too broad.

Justice Robert H. Jackson also dissented, observing that a law that could be judicially construed narrowly could later be construed broadly and that this could be done with no constitutional protection from the prohibition against ex post facto laws.