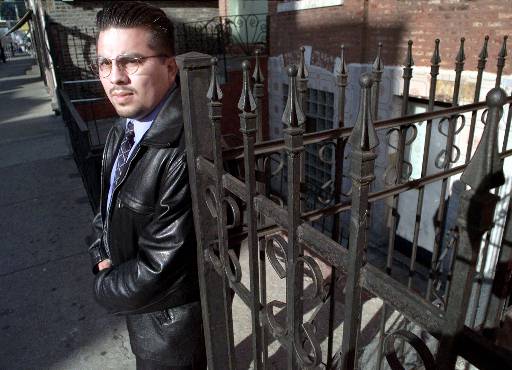 Luis Gutierrez stands outside his home on Chicago's West Side on Wednesday, Dec. 2, 1998. Gutierrez was arrested by Chicago police and charged under a controversial anti-loitering law designed to combat drug selling-street gangs. A judge dismissed the case six weeks later. The U.S. Supreme Court later invalidated the law, saying it was too vague about constituted illegal conduct. (AP Photo/Michael S. Green, reprinted with permission from the Associated Press)

In City of Chicago v. Morales, 527 U.S. 41 (1999), the Supreme Court held that a Chicago “gang loitering” ordinance — which prohibited individuals whom police reasonably believed to be members of a “criminal street gang” from loitering in public with one or more persons — was unconstitutionally vague.

The 6-3 decision, with four of the six justices in the majority writing separately, did not completely prohibit state and local governments from establishing such programs, but it imposed standards by which courts could scrutinize such schemes for violations of due process and, arguably, the right to freedom of association.

Like many other municipal governments in the 1990s, Chicago had established a policy prohibiting “criminal street gang members” from loitering in public places.

Under an ordinance, if police officers observed a person whom they “reasonably believed” to be a gang member loitering — defined as “remaining in any one place with no apparent purpose” — with one or more persons, they could order them to disperse and arrest them if they did not.

The Illinois appellate court held that the ordinance violated the First Amendment freedoms of association, assembly, and expression established in prior cases, including Roberts v. United States Jaycees (1984).

The state supreme court found a due process violation because the ordinance was impermissibly vague on its face, but expressly declined to reach the First Amendment issue.

Court said law was too vague

Without disagreeing with the city’s argument that gang activity had become a public nuisance harming the peace and quiet of a community, the Court majority, citing Kolender v. Lawson (1983), held that the ordinance violated due process because it did not provide adequate notice of what conduct was illegal and gave essentially unfettered discretion to law enforcement officers.

Justices David H. Souter and Ruth Bader Ginsburg explicitly agreed with Justice John Paul Stevens’s argument that “the freedom to loiter for innocent purposes is part of the liberty protected by the due process clause of the Fourteenth Amendment.”

Nevertheless, citing City of Dallas v. Stanglin (1989), even these three justices agreed that there is no generalized right of “social association” separate from protected intimate association and expressive association.

Waxing poetic, Justice Antonin Scalia’s dissent lifted a scene from the 1959 musical West Side Story to argue that refusing a police order to disperse, not loitering per se, can and should result in an arrest.

Police can turn to restraining orders to limit gang activities

The Morales decision did not spell the end of the nuisance-based gang suppression approach.

As implied by language in Justice Stevens’s opinion and a concurring opinion by Justices Sandra Day O’ Connor and Stephen G. Breyer, courts have generally approved an injunction-based policy under which police seek a court-issued restraining order identifying specific individuals as gang members and enjoining them from engaging in specified activities.