Cramp v. Board of Public Instruction of Orange County (1961) 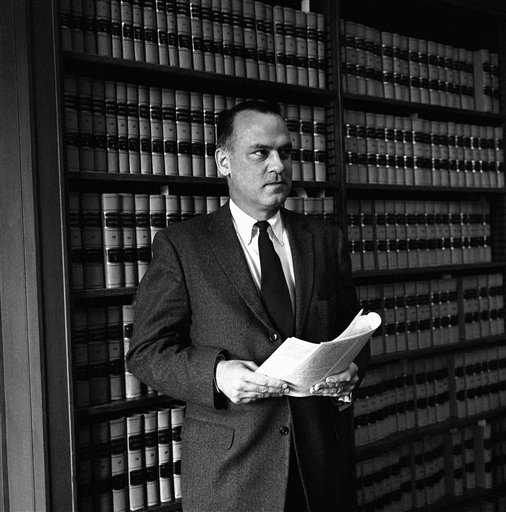 Justice Potter Stewart of Cincinnati, Ohio, in his office at the Supreme Court in Washington in 1959. In his opinion striking down Florida's law requiring all state employees sign a loyalty oath, Stewart said that the law carried "the risk of unfair prosecution and the potential deterrence of constitutionally protected conduct..." (AP Photo/Henry Griffin, used with permission from the Associated Press)

In Cramp v. Board of Public Instruction of Orange County, 368 U.S. 278 (1961), the Supreme Court unanimously struck down as unconstitutionally vague a 1949 Florida statute requiring all state employees to swear in writing that they had not lent their “aid, support, advice, counsel or influence to the Communist Party.”

David Cramp, a public school teacher for nine years, had declared that he was not a member of the Communist Party and had not lent support to the party, but he refused to sign the required loyalty oath. Because he refused to sign an oath, he lost his job. He sued the Orange County school board on the grounds that the oath statute constituted an unconstitutional ex post facto law and bill of attainder and that the requirement of an oath was unconstitutionally vague.

In the opinion for the Court, Justice Potter Stewart asserted that the law at issue was indeed unconstitutionally vague and that such vagueness was of special concern when First Amendment rights were involved.

He added that this finding was not intended to “question the power of a State to safeguard the public service from disloyalty.”

According to Stewart, vagueness could lead to “the risk of unfair prosecution and the potential deterrence of constitutionally protected conduct,” such as speech. He observed that a vague statute was particularly likely to weigh upon those with tender consciences. Experience shows that “prosecutors too are humans” and that some are “always ready to affix a Communist label upon those whose ideas they violently oppose.”

Justices Hugo Black and William O. Douglas concurred but for reasons expressed in dissents and concurrences in other free speech cases.