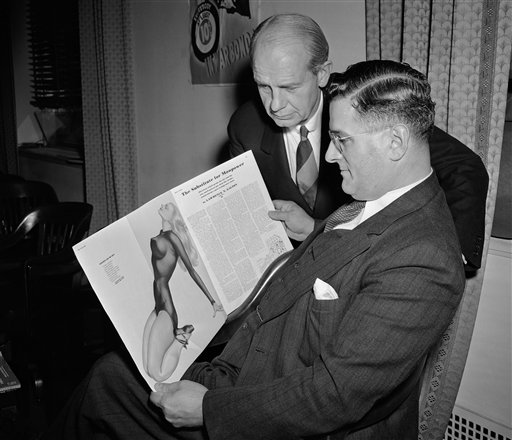 The silken lines of a Varga girl illustration in a copy of Esquire magazine are surveyed by Louis J. Croteau, right, of Burlington, Mass., secretary of New England Watch and War Society – "watchdog of New England's morals"– as he testified at a Post Office Department hearing that the magazine was not dangerous to the nation's morals in Washington on Oct. 22, 1943. The Supreme Court in Hannegan v. Esquire (1946) said the postmaster general could not restrict mailing of the magazine. (AP Photo, used with permission from the Associated Press)

In Hannegan v. Esquire, 327 U.S. 146 (1946), the Supreme Court overturned a decision by the postmaster general revoking the second-class-mail permit that his department had issued to Esquire magazine. The decision thus affirmed First Amendment rights of freedom of speech and press against administrative attempts at suppression.

Writing for the Court, Justice William O. Douglas noted that Congress classified mailable materials as second-class when they conveyed “information of a public character” or were “devoted to literature, the sciences, arts, or some special industry,” had “a legitimate list of subscribers,” and were not “designed primarily for advertising purposes, or for free circulation, or for circulation at nominal rates.”

Douglas wrote that it was “abhorrent to our traditions” to think that the postmaster general had the power to decide on whether the contents of a magazine were “good” or “bad.” He found no such power under the original act from 1794 that granted special rates to periodicals or in the amended Classification Act of 1879. To grant the postmaster such power would be to grant him the power of censorship. Douglas argued that “Under our system of government there is an accommodation for the widest varieties of tastes and ideas.” He further observed that “What seems to one to be trash may have for others fleeting or even enduring values.” In the Court’s view, the power to determine whether a periodical contained information of a public character did not also give the postmaster the “power to determine whether the contents meet some standard of the public good or welfare.”

Concurring, Justice Felix Frankfurter argued that the materials in question fell under the scope of literature authorized for second-class status under existing laws.