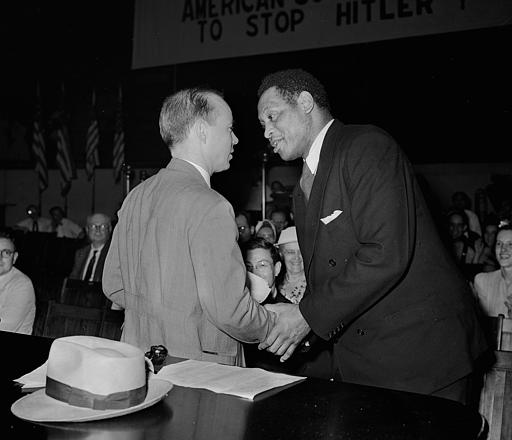 Corliss Lamont was one of the founders and the first chairman of the National Council on American-Soviet Friendship in the 1940s, which pushed for the United States to form an anti-fascist alliance with the Soviet Union. Lamont successfully challenged a federal law on First Amendment grounds that allowed the Postmaster General to review material sent from abroad to determine if it was communist propaganda and restrict its delivery. In this photo, Lamont (left) is greeted by singer Paul Robeson after addressing a rally calling for diplomatic and economic cooperation with the Soviet Union (AP Photo/Tom Fitzsimmons, used with permission from the Associated Press)

The Supreme Court decision in Lamont v. Postmaster General, 381 U.S. 301 (1965), invalidated a statute allowing the Postmaster General to regulate the flow of “communist political propaganda” through the mails.

The law at issue in Lamont required the postmaster general to review postal matter sent from abroad and determine at his or her discretion which constituted “communist political propaganda.” If the postmaster general determined that the mail was indeed communist propaganda, the addressee of the material would receive a postcard instead of the mail.

Dr. Corliss Lamont, who engaged in publishing and distributing pamphlets, filed suit to enjoin enforcement of the statute. The Post Office had allowed one controversial piece of mail through in an attempt make his suit moot. However, the Supreme Court struck down the law.

The Court invalidated the law because it “require[d] an official act (viz., returning the reply card) as a limitation on the unfettered exercise of the addressees[’] First Amendment rights.” The Court concluded that the statute was “almost certain to have a deterrent effect, especially as respects those who have sensitive positions,” and thus “amount[ed] to an unconstitutional abridgment of the addressee’s First Amendment rights.”

Justice Brennan made explicit what had been implicit in the majority opinion, declaring that “the right to receive publications is . . . a fundamental right,” the protection of which is “necessary to make the express guarantees [of the First Amendment] fully meaningful.” Although mentioned in a concurrence only, the “right to receive” was clearly acknowledged by the entire Court because the Court premised its holding on the addressee’s, rather than the foreign speaker’s, constitutional claim in order to avoid the difficult question of whether foreign governments have First Amendment rights.

Building on Justice Oliver Wendell Holmes Jr.’s use of the phrase “competition of the market" in his famous dissent in Abrams v. United States (1919), Justice Brennan stated in Lamont: “It would be a barren marketplace of ideas that had only sellers and no buyers.” By comparing the exchange of ideas to the exchange of goods in a marketplace, Justice Brennan highlighted the intrinsic necessity of buyers of goods and, analogously, the importance of a “right to receive” ideas.