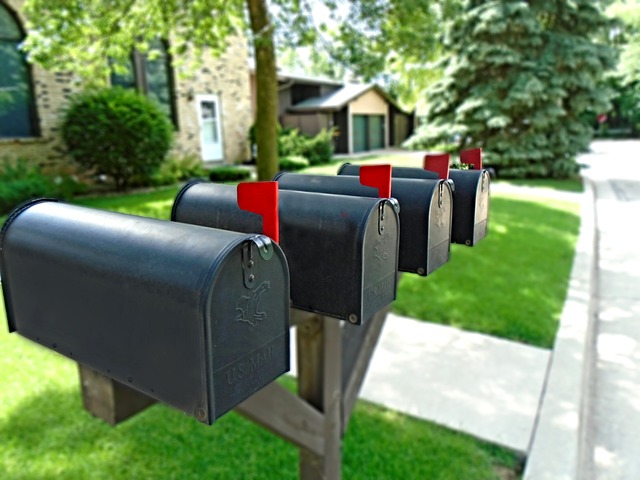 In United States Postal Service v. Greenburgh Civic Associations (1981), the Supreme Court upheld a postal statute that prohibited unstamped mailable items from being placed in mailboxes. A civic group who placed messages and pamphlets in the mailboxes of private residents contended the statute was a a violation of free speech. But the Court in rejected the First Amendment claim, reasoning that the law was content neutral and did not place unbridled discretion in the hands of a government official. (Photo via Pixabay, public domain)

Congress promulgated the challenged statute in 1934, which imposed a $300 fine on anyone who deposited mailable matter in a letterbox without proper postage, primarily to prevent private delivery services from using official post office mailboxes without paying the government.

After a civic group who delivered messages to local residents by placing unstamped notices and pamphlets in the letterboxes of their private homes was notified it would be fined if it did not stop, the group filed a suit contending the law violated freedom of speech.

The government argued, on the other hand, that the statute facilitated a more efficient delivery of the mail and protected the privacy of postal patrons.

Relying principally on the long history of the post office and its monopoly on “mailable matter,” the Court upheld the statute in a decision written by Justice William H. Rehnquist.

Analogizing mailboxes to the military base in Greer v. Spock (1976), the prison in Adderly v. Florida (1966), and the public transit advertisements in Lehman v. City of Shaker Heights (1974), the Court concluded that mailboxes were not a public forum.

Since the law was content neutral and did not place unbridled discretion in a government official, the Court concluded that it did not violate the First Amendment.

Justice Byron R. White concurred in the judgment, concluding that the mailbox was part of the postal system. As the government could constitutionally charge a fee for the service of mail delivery, it could likewise charge for use of the mailbox.

Justice William J. Brennan Jr. also concurred in the judgment. He concluded that the mailbox was a public forum but that the law was a permissible reasonable “time, place, and manner” regulation.

Justice Thurgood Marshall used the “public forum analysis,” but he dissented, concluding that the burden on First Amendment interests was too great and that the statute’s purpose could be advanced by less intrusive alternatives, such as a “nondiscriminatory permit requirement for depositing unstamped circulars in letterboxes.”

Justice John Paul Stevens also dissented, arguing that the mailbox was private property, not a public forum. He reasoned that a statute permitting homeowners to decide whether to receive unstamped communications would be less burdensome on the First Amendment and would still further the government’s interest without impeding the free flow of communication.