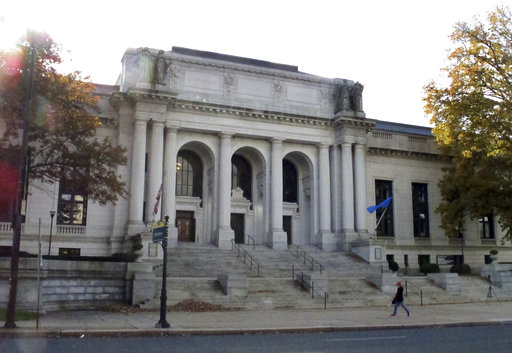 All states have provisions in their constitutions protecting the same or similiar free speech rights found in the Bill of Rights of the U.S. Constitution. In 1977, Justice William Brennan Jr. encouraged state courts and judges to use their own constitutions to protect individual rights independent of what the federal courts did through the U.S. Constitution. Since then, some state supreme courts have chosen to grant more protection under their own constitutions than under the First Amendment, including those in New Jersey and Connecticut. (Photo of Connecticut Supreme Court building in 2017, AP Photo/Dave Collins, used with permission from The Associated Press.)

However, most states had adopted constitutions before the United States did, and most included bills or declarations of rights. Today all of the states have provisions in their constitutions that protect these or similar rights, and in some cases offer greater protection for speech, press, and assembly rights than those based on the U.S. Constitution.

The history and relationship between rights protected under federal and various state constitutions provide important insights into federalism.

The 1776 Virginia Declaration of Rights is often credited with being the source or inspiration for the amendments James Madison offered to the Constitution in 1791. Those (ten) that originally passed came to be known as the Bill of Rights.

Although state bills of rights had inspired the construction of federal constitutional rights, recourse to state constitutions as an independent source of protection for expressive rights was not common until the later 1990s. Instead, because the supremacy clause of the U.S. Constitution takes precedence over state law and constitutions, and because the Warren Court used its powers to incorporate many provisions of the Bill of Rights to apply to the states, there was little incentive or opportunity for state courts to reference their constitutions to protect individual expressive rights.

This situation changed in 1977, when Justice William J. Brennan Jr., seeing that the Burger Court was, in his opinion, retrenching on the protection of individual rights, encouraged state courts and judges to use their own constitutions to protect individual rights independently of what the federal courts did vis-à-vis the federal Constitution.

According to the principles of federalism and rules of abstention, if a state court uses its own constitution as the basis of a decision, such as in a case addressing freedom of speech, the U.S. Supreme Court lacks the jurisdiction or authority either to hear or to overturn that decision as long as it meets the federal minimums. Thus, nothing prevents a state court from finding that its own constitution offers more protection for any rights, including expressive rights, in comparison to those found in the U.S. Constitution or Bill of Rights.

In many instances since the late 1970s and early 1980s state courts have used their own constitutions to offer protection to expressive freedoms independently of the U.S. Constitution’s First Amendment.

In PruneYard Shopping Center v. Robins (1980), the U.S. Supreme Court held that the First Amendment did not give individuals the right to solicit signatures for a petition in a shopping mall without the permission of the owner because the property rights of owners outweighed the right to petition. In New Jersey Coalition Against War in the Middle East v. J.M.B. Realty Corp. (1994), Lloyd Corporation, Ltd. v. Whiffen (1993), and Batchelder v. Allied Stores International, Inc. (1983), however, state courts in New Jersey, Oregon, and Massachusetts reached different conclusions, often granting individuals various rights to gather petition signatures in shopping malls that exceeded those in PruneYard.

On the other hand, in Minnesota v. Wicklund (1999), the Minnesota Supreme Court refused to grant more rights to freedom of expression in shopping malls — in this case, the Mall of America — than found in the PruneYard decision.

The Connecticut Supreme Court has interpreted its state freedom of expression guarantee to provide greater free-speech protections to employees than the U.S. Supreme Court provided in Garcetti v. Ceballos(2006).

The state high court reasoned in Trusz v. UBS Realty Investors (2015) that “[t]here is no evidence that the constitutional framers [of the Connecticut Constitution] intended to impose such severe limits on the speech rights of the state’s citizenry.”

New Jersey and Connecticut are more exceptions than the rule.

Most state high courts continued to interpret their state freedom of expression guarantees similarly, if not identically, to the way the U.S. Supreme Court has interpreted the First Amendment.

Overall, although often ignored, state constitutions provide a rich, independent, and sometimes more expansive protection for expressive freedoms than is found in the First Amendment. Citizens and lawyers generally overlook state constitutional protections, but they too are important clauses defending speech, press, and assembly rights.