Virginia and Kentucky Resolutions of 1798

By Douglas C. Dow
Other articles in Documents 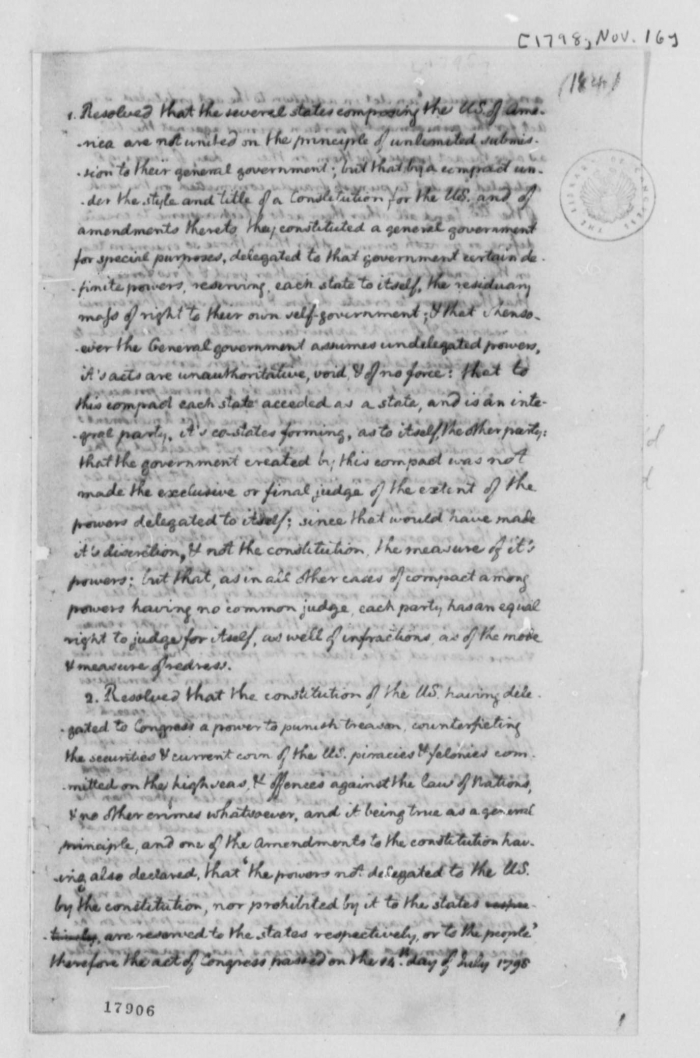 The Virginia and Kentucky Resolutions of 1798 were Democratic-Republican responses to the Alien and Sedition Acts passed earlier that same year by a Federalist-dominated Congress. Drafted in secret by future Presidents Thomas Jefferson and James Madison, the resolutions condemned the Alien and Sedition Acts as unconstitutional and claimed that because these acts overstepped federal authority under the Constitution, they were null and void. This image is of the Kentucky Resolution of 1798, penned by Thomas Jefferson. (Image via Library of Congress, public domain)

The Virginia and Kentucky Resolutions of 1798 were Democratic-Republican responses to the Alien and Sedition Acts passed earlier that same year by a Federalist-dominated Congress. Drafted in secret by future Presidents Thomas Jefferson and James Madison, the resolutions condemned the Alien and Sedition Acts as unconstitutional and claimed that because these acts overstepped federal authority under the Constitution, they were null and void.

The resolutions have a complicated history and legacy. They were an early defense of the Constitution’s protection of civil liberties, especially freedom of speech and of the press; however, because they argued that the acts illegally usurped powers reserved for the states, they also became the founding documents in the states’ rights movement and were cited by antebellum supporters of state nullification and secession in the mid-nineteenth century and by advocates of resistance to federal school desegregation orders in the mid-twentieth century.

Resolutions were written in response to Alien and Sedition Acts

As noted, the resolutions were written in response to Alien and Sedition Acts, which were four separate laws passed in the midst of an undeclared war at sea with revolutionary France. Among other things, the Alien Acts granted the president the power to seize, detain, and ultimately deport any noncitizen he deemed dangerous to the United States, regardless of whether the nation was at war. Accused aliens were given no right to a judicial hearing or to hear the specific charges against them. The Sedition Act made it a crime to write, print, publish, or utter anything false, scandalous, or malicious against the U.S. government, Congress, or the President.

The Democratic-Republicans, political opponents of the Federalists, felt threatened by these laws. In fact, Jefferson and Madison kept their authorship of the resolutions secret because they feared arrest for sedition. When the Federalists gained control of all three branches of the federal government in 1798, Jefferson struck on the idea of getting sympathetic state legislatures to pass resolutions as a way to respond to the acts. He hoped that more states would respond in like-minded ways and that this would lead to more electoral victories over the Federalists. Subsequently, Kentucky’s legislature passed the resolution that Jefferson had penned with little debate or revision on November 11, 1798, and the Virginia legislature passed its more temperate resolution on Christmas Eve of the same year.

Resolutions asserted the separation of powers

The resolutions assert two key propositions. First, the Union is a compact among individual states that delegates specific powers to the federal government and reserves the rest for the states to exercise themselves. Second, it is both a right and a duty of individual states to interpose themselves between their citizens and the federal government. On these bases, Virginia’s resolution, penned by Madison, declared that the Alien and Sedition Acts were unconstitutional and that measures should be taken by all states to retain their reserved powers. Jefferson’s more strident Kentucky Resolution took Madison’s theory of interposition a step further and concluded that because the Alien and Sedition Acts were unconstitutional, they were null and void.

Resolutions failed to influence other states to pass similar resolutions

The intent of the resolutions was to induce other state legislatures to pick up the critique and pass similar resolutions, thus acting as decentralized opposition to the Federalists. Judged by this standard, they were a failure. No state responded with similar official denunciations, and the legislatures of ten states went as far as to officially repudiate the resolutions, most arguing that the federal courts, not state legislatures, were the legitimate interpreters of the federal Constitution. Nevertheless, the resolutions did help the Democratic-Republicans develop as an organized oppositional party, and two years later Jefferson would eke out a victory in the 1800 presidential elections. Madison’s Report of 1800, defending the resolutions is, moreover, an important milestone in defense of First Amendment freedoms of speech and press.

The complex legacy of the resolutions stems from lingering questions as to whether they are best understood as a defense of civil liberties or of states’ rights. Rather than asserting the principles of free speech and civil protections for aliens not charged with crimes, Jefferson and Madison argued that the power to pass such acts was not properly delegated to the national government by the states. The tone and language of the resolutions are not that of a newspaper editorial meant to shape public opinion, but rather are constitutional treatises designed to elaborate on essential structures of government. From the context of the late 1790s, they are best understood as an early episode of party politics in the United States and an attempt to gain electoral advantage. However, their dominant legacy is as an exemplification of the constitutional doctrine of nullification.

Resolutions seen as examples of the doctrine of nullification

During the nullification crisis of the early 1830s over the federal tariff, states’ rights figures such as John Calhoun and Robert Hayne explicitly cited the Virginia and Kentucky Resolutions as early exemplifications of their theory that a state legislature could declare federal laws null and void within its own borders. Calhoun argued in much the same manner as found in the resolutions that the states formed a compact with each other, delegating specific powers to the federal government and that, therefore, the states ultimately were the judges of the Constitution.

A senior statesman at the time, Madison fought back against the appropriation of the resolutions to the cause of nullification. He argued that context was all-important and that the dangers of the Alien and Sedition Acts should not be compared to the inconveniences of a tariff. Madison also stressed the difference between a state legislature voicing an opinion and its making a self-executing decision. The resolutions were not designed to disrupt the execution of federal law in the state but rather to declare the official opinion of the state and hopefully rally support of other states. While the states collectively might repulse the federal government, Madison did not believe that a single state had the authority to nullify federal law within its own borders. Backing away from the doctrinal wording of the resolutions, Madison argued that they were designed only to ferment popular opinion against the laws and lead to an electoral victory against the Federalists. Both of these acts are cognizable within the Constitution and do not suggest an extraconstitutional right of a single state against the federal government.