By Ryan C. Black
Related cases in Bar Admissions and Freedom of Association 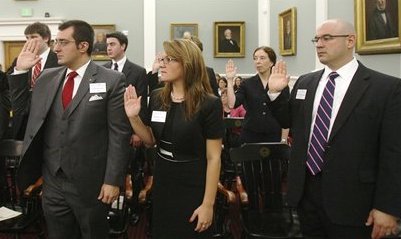 The Supreme Court in Law Students Civil Rights Research Council v. Wadmond (1971), upheld a rule of the New York Bar requiring an applicant to provide proof that he or she “believes in the form of the government of the United States and is loyal to such a government.” In this photo, Franklin Pierce Law Center students are sworn in as lawyers at the State Supreme Court in Concord, New Hampshire, in 2010. (AP Photo/Jim Cole, used with permission from the Associated Press)

The Supreme Court in Law Students Civil Rights Research Council v. Wadmond, 401 U.S. 154 (1971), upheld a rule of the New York Bar requiring an applicant to provide proof that he or she “believes in the form of the government of the United States and is loyal to such a government.”

The Court specifically held that the bar did not violate the First Amendment by asking a series of questions, including whether an applicant had ever been a member of a group that advocated the overthrow of a sitting government and could affirm loyalty to the Constitution of the United States “without any mental reservation.”

In the opinion for the majority, Justice Potter Stewart repeatedly emphasized that the petitioners could not show where anyone had been denied admittance to the bar because of answers to the required questions. The Court further accepted the respondent’s extremely narrow interpretation of the New York rule whereby loyalty was interpreted to mean a commitment to the U.S. Constitution and a willingness to take the oath in good faith.

In evaluating the specific questions, the Court stated that consistent with Scales v. United States (1961), individuals advocating upheaval of the government may be punished. Regarding the constitutional loyalty question, Stewart argued that it is no different from the oath required of U.S. civil servants.

The Court appeared more broadly to be sympathetic to a system completely void of initial screening. As Stewart noted, however, “the choice between systems . . . rests with the legislatures and other policymaking bodies of the individual states. New York has made its choice. To disturb it would be beyond the power of this Court.”

Some justices were wary of examining political beliefs

Justice Hugo L. Black dissented, arguing that the questions posed by the New York Bar risked allowing other lawyers to screen out their potential competition. He characterized such deprivation as tantamount to taking property from an individual that should be rejected. Black also argued that the decision violated precedent set by several previous Court decisions.

The decision in Law Students Civil Rights Research Council was in tension with decisions the Court delivered the same day in Baird v. State Bar of Arizona (1971) and In re Stolar (1971), which limited the ability of state bar associations to ask certain questions about political activity on bar exams.

This article was originally published in 2009. Ryan C. Black is a Professor in the Department of Political Science at Michigan State University.