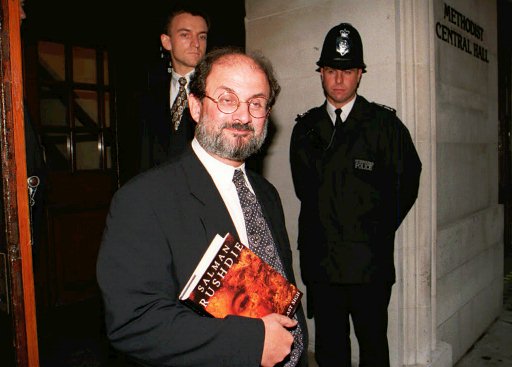 The laissez-faire attitude that the U.S. government takes toward religious doctrine contrasts with practices in other parts of the world. For example, Iran’s Ayatollah Khomeini issued a fatwa, or legal declaration, in 1989 calling on Muslims to execute novelist Salman Rushdie (pictured here in 1995), whose book The Satanic Verses was judged by Khomeini to be blasphemous. Similarly, mobs in many Arab countries reacted violently in 2005–2006 when Danish newspapers published cartoons that depicted the prophet Mohammed in unfavorable ways. (AP Photo/Rebecca Naden, used with permission from the Associated Press)

Blasphemy laws punish people who make oral or written statements that are understood to express irreverence for sacred things.

Long a feature of English and colonial societies and still prominent in some theocratic regimes, laws against blasphemy have disappeared in the United States because of the First Amendment. Such laws were most frequently associated with the kind of religious establishment that the First Amendment limited at the national level and that courts later applied via the Fourteenth Amendment to the states.

In the Bible, Leviticus 24:15–16 calls for the stoning of anyone who curses the God of Israel. Ancient Greece and Rome had similar prohibitions against those who spoke ill of the gods.The trial of Jesus was predicated in part on the idea that he had made blasphemous claims to be God.

Although Christians initially sought converts through speech and persuasion and stressed the separation of religious and political duties (Jesus had said, “Render unto Caesar the things that are Caesar’s and to God the things that are God’s”), after Emperor Constantine I proclaimed Christianity the official religion of Rome, Christians increasingly used state powers to punish both those who blasphemed God and those within their own ranks whom they believed to be heretics.

With the dawn of the Reformation, Catholics and Protestants used laws not only to battle one another but also to strike out at unbelievers. The English jurist William Blackstone defined blasphemy as “denying the being or providence of God, contumelious reproaches of our Saviour Jesus Christ, profane scoffing at the Holy Scripture, or exposing it to contempt or ridicule” (as quoted in The Catholic Encyclopedia).

Just as the English punished those who blasphemed the doctrines of the established church, so too the Pilgrims set standards of orthodoxy in the infant United States that they enforced by the sword. Massachusetts banished, and occasionally executed, Quaker dissenters who refused to stay away from the state.

Most of the 13 original states established churches, and many officially restricted office-holding to Trinitarians or to those who professed to believe biblical doctrines. By contrast, the U.S. Constitution prohibited test oaths for federal officials, but it did not interfere with existing state practices. In time, however, the prohibition on federal religious oaths, as well as the provisions of the First Amendment, had a liberalizing effect on state practices.

Two famous 19th century cases epitomized the lingering remnants of blasphemy laws. In People v. Ruggles (N.Y. 1811), a New York court upheld the conviction of a man who referred to Jesus and his mother in unflattering terms. Even though New York no longer had a statute on the subject, the court’s chief judge, James Kent, ruled that the offense of blasphemy violated the state’s common law as carried over from England (but Kent believed that the state laws prohibited blasphemy only against the Christian religion).

In Commonwealth v. Kneeland (Mass. 1838), the Supreme Court of Massachusetts, led by Lemuel Shaw, upheld the conviction of a publisher who denied the existence of God, Jesus, and miracles. Both convictions resulted in relatively short jail terms (and in Ruggles a fine).

Court later said governments could not supress attacks on doctrine

In Burstyn v. Wilson (1952), the U.S. Supreme Court overruled a state supreme court decision and declared that governments had no business suppressing attacks on religious doctrines.

Other parts of the world still have blasphemy laws

The laissez-faire attitude that the U.S. government takes toward religious doctrine contrasts with practices in other parts of the world.

For example, Iran’s Ayatollah Khomeini issued a fatwa, or legal declaration, in 1989 calling on Muslims to execute novelist Salman Rushdie, whose book The Satanic Verses was judged by Khomeini to be blasphemous. Similarly, mobs in many Arab countries reacted violently in 2005–2006 when Danish newspapers published cartoons that depicted the prophet Mohammed in unfavorable ways.

Some express concern over 'terrorist veto'

Daniel Ortner notes that the strong presumption against prior restraint would likely protect any of these publications in the United States. He further observes that “Provocative Images Are Speech with High Intrinsic Worth” (2016, p. 27); that the publications were not, like fighting words, directed to a specific person; that although they were later capitalized upon, they rarely if ever posed an “imminent” danger; that unlike true threats, they were not designed to cause harm; and that it is very unlikely that laws seeking to regulate them could survive strict judicial scrutiny.

Ortner expressed concern over what he called a “terrorist veto,” similar to the “heckler’s veto,” affecting not simply words that provoke imminent reaction but those that can result in terrorist acts years after publication.  He feared that the reaction to prior depictions of Mohammed have already had a chilling effect on publication outlets.

Notably in 2009, when Yale University Press published a book by Jytte Klausen, The Cartoons That Shook the World, it decided not to reprint the cartoons that were its primary subject.