By Ronald Steiner
Other articles in Legal Terms and Concepts Related to Speech, Press, Assembly, or Petition 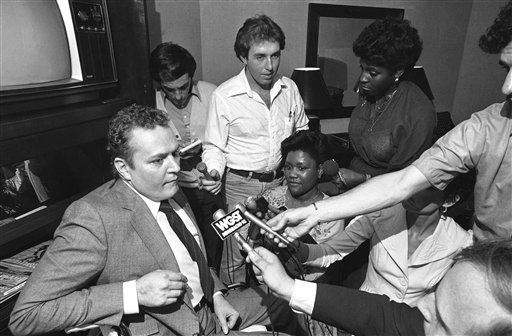 After decades of debate, the Supreme Court in Miller v. California (1973) established a definition of obscenity for criminal prosecution and other purposes. The test required the jury to use contemporary community standards. In this photo, Hustler magazine publisher Larry Flynt, left, tells an Atlanta news conference that he didn’t believe he got a fair trial, March 29, 1979. Flynt was found guilty on 11 misdemeanor charges of obscenity by the Fulton State Court. He said "I felt there was collusion between the prosecution and the judge. There was no way I could get a fair trial." He was ordered to pay a total of $27,500 in fines. (AP Photo/Steve Helber, courtesy of The Associated Press)

After decades of debate, the Supreme Court in Miller v. California (1973) established a definition of obscenity for criminal prosecution and other purposes.

In a 5-4 opinion by Chief Justice Warren E. Burger, the Court ruled that a trier of fact — usually a jury — must determine whether the average person, applying contemporary community standards, would find that the work, taken as a whole:

The appeal to community standards in determining the first two prongs of the obscenity test, and the assessment of “the average person” considering the work “taken as a whole,” cemented the Court’s rejection of the Hicklin test. That test, set out in the English case of Regina v. Hicklin (1868), regulated expression by assessing the impact it might have on children or extremely sensitive adults.

The Miller test came at a time when internal migration, increased travel, and emerging technologies in telecommunications and media distribution had led to the establishment of a truly national media market. Media conglomerates, always based in major metropolitan areas, had the capacity to reach nearly every community in the United States with television, books, magazines, and films.

He sided with those who thought communities ought to be able to resist the encroachment of materials inconsistent with local values. He said that the First Amendment did not require “the people of Maine or Mississippi [to] accept public depiction of conduct found tolerable in Las Vegas, or New York City.”

Justice William J. Brennan Jr. and the other Miller dissenters thought the national media market required national standards, particularly because it was difficult to see how obscenity could be defined precisely enough to avoid unconstitutional vagueness under the due process clause. Such vagueness also had First Amendment implications, because any attempt to define and criminalize obscene expression necessarily would affect nonobscene and protected expression.

The focus on community standards, under which local standards determine the lawfulness of distributed works no matter where they are produced, was the essential feature of the Miller test and a ready target of critics. The fact that a work might be found obscene in one community but acceptable in another is not a “bug” in the Miller test, but its basic feature.

First, while the Court explained that the concept of community standards does not refer to any national standards, it essentially left trial courts and juries free to decide based on whatever definition their community thought appropriate. Courts have permitted consideration of a community as ranging from statewide — including nation-state-sized states, such as California, Texas, and Illinois — to a division of the federal district court or a three-county metropolitan region.

Second, to the extent that producers of adult material can determine local sensitivities, they must either avoid the community with the most restrictive standards or self-censor their national distribution to the tastes of those communities. Indeed, the U.S. Department of Justice routinely seeks out conservative jurisdictions to bring prosecutions against adult entertainment businesses, as in United States v. Extreme Associates (3rd Cir. 2006), where federal agents made online purchases of adult films in Pittsburgh so the department could file a criminal prosecution in the Western District of Pennsylvania against a Los Angeles–based producer and distributor of adult films.

Third, the fact-based finding of local community standards makes it difficult, if not impossible, to know in advance whether a work will be found to be obscene in any particular locality. First Amendment advocates Lawrence Walters and Clyde DeWitt (2005) complain that “there have been instances where the same motion picture has been found obscene by one jury and not obscene by another — in the same city, same courthouse and before the same judge, with the two trials occurring within weeks of each other.”

All these concerns are magnified by the Internet, where everything is simultaneously available everywhere.

Indeed, the Third Circuit Court of Appeals upheld an injunction against enforcement of the Child Online Protection Act of 1998 (COPA) on the ground that a community standards test “would essentially require every Web communication to abide by the most restrictive community’s standards.”

In Ashcroft v. American Civil Liberties Union (2002), the Supreme Court reversed that decision, finding that COPA allowed national standards to be taken into account, and remanded the case for lower court consideration of the effectiveness of filtering and other proposed alternative (and arguably less restrictive) forms of limiting access of minors. Justice Stephen G. Breyer and several other justices shared the Third Circuit’s concerns, cautioning that the community standards of “the most puritan of communities” would produce “a heckler’s Internet veto affecting the rest of the nation.”

At the same time, the Web and other technologies, such as cable and pay-per-view television, have made adult materials more readily available to more people than ever.

When the Miller test was devised, many observers assumed that it would result in hard-core material being banned as obscene while allowing soft-core material to be distributed to adults so long as minors could not easily access it.

Changing cultural patterns and new technologies quickly unsettled these expectations; under the Miller standard today, prosecutors might not get obscenity convictions in certain urban areas even when material includes detailed portrayals of genitalia or explicit sexual activity.

In 2003 a video store owner in supposedly conservative Provo, Utah, beat an obscenity prosecution by convincing a jury that the adult materials he distributed were consistent with community values as demonstrated through local usage statistics for pay-per-view adult films on the local cable channel and in local hotels.