By Derek Davis
Other articles in Issues Related to Religion 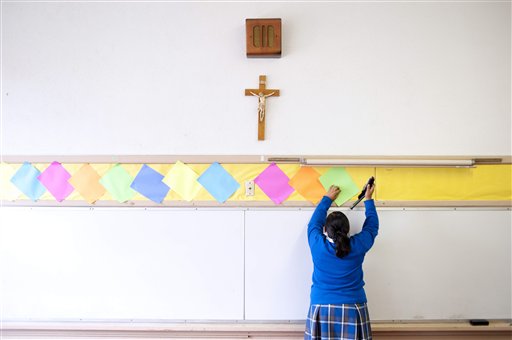 The Supreme Court has ruled in a long line of cases involving government aid to religious schools. The Court primarily has weighed whether such aid violates the establishment clause in the First Amendment. In this 2012 photo, a Catholic school student stapled colored paper to the wall at Our Lady of Lourdes in Los Angeles, volunteering after class to help improve the school in hopes of building enrollment. (AP Photo/Grant Hindsley, used with permission from The Associated Press.)

Entering the 21st century, roughly 10 percent of the nation’s pre-college-aged children attended parochial schools. The free exercise clause protects a student’s right to attend such schools, but state efforts to support parochial schools through myriad programs have been tested mainly under the establishment clause of the First Amendment.

Over the years, the Supreme Court has gradually moved from the principle of “no aid” to religion to one of “neutrality,” which permits aid provided it is available to a wide range of recipients, not just religious ones.

Pierce v. Society of Sisters (1925) represents the “Magna Carta” of parochial school cases. In it, the Supreme Court held that Oregon’s compulsory education laws interfered with parents’ right to send their children to parochial schools. Because the First Amendment had not yet been applied to the states at the time of the case, the Court based its decision on the idea that the due process clause of the Fourteenth Amendment protected certain fundamental rights — the idea of substantive due process.

In Cochran v. Louisiana (1930), the Court allowed Louisiana to use state funds to purchase secular textbooks for religious and public schools. The Court held that the program benefited individual school children rather than religious schools. This “child benefit” theory remained a staple in numerous subsequent decisions.

Everson v. Board of Education (1947), the first case to incorporate the establishment clause under the Fourteenth Amendment, examined a Ewing, New Jersey, program to reimburse parents of children attending parochial schools for transportation costs. In a 5-4 vote to uphold the practice, the Court followed the “child benefit” doctrine of Cochran, reasoning that the benefit went to students, not the religious schools.

In Board of Education v. Allen (1968), the Court considered a New York education law requiring the state to provide textbooks to children in all private and public schools. It upheld the program on the theory that no direct benefit flowed to the religious institutions. Of importance, the books could be reviewed in advance, ensuring that they cover only secular subjects and therefore not be used for religious purposes.

Lemon v. Kurtzman (1971) concerned a Pennsylvania statute paying for parochial school teachers’ salaries and a Rhode Island statute supplementing such salaries. In an 8-0 decision, the Court found that such aid constituted “excessive entanglement” between church and state and was thus unconstitutional.

Court struck down many state efforts to aid parochial schools

In Committee for Public Education v. Nyquist (1973), New York provided grants to sectarian groups to create and develop school facilities in low-income neighborhoods. The legislation also provided tuition reimbursement to parents who sent their children to parochial schools. The Court declared the law to be unconstitutional on the ground that it had the effect of aiding religion.

In Meek v. Pittenger (1975), the Court struck down attempts by Pennsylvania to aid its parochial schools. This case involved various forms of aid to religious schools, including remedial services for handicapped students and instructional materials, such as films and projectors. The Court, per Allen, permitted the state to purchase textbooks for students but denied the other forms of aid because they could be used to advance religion.

Perhaps in response to unmitigated criticism of the Court for its refusal to approve much in the way of state aid to parochial education, the Court considered in Wolman v. Walter (1977) an Ohio program that provided testing, speech, and hearing diagnostic services for students in church-related schools. The Court upheld these programs because they were “incapable of diversion to religious use.”

In Committee for Public Education v. Regan (1980), however, the Court upheld a New York statute reimbursing parochial schools for expenses incurred in administrating state-mandated tests on the ground that “the new statute, unlike the earlier version, provided a means by which state funds are audited, thus ensuring that only the actual costs incurred in providing the covered secular services are reimbursed out of state funds.”

Mueller v. Allen (1983) produced a new theory — neutrality — destined to become a hallmark of Supreme Court religion clause jurisprudence. The Court held that Minnesota parents could deduct expenses for tuition, textbook costs, and transportation for their children regardless of the type of school they attended. Because the statute was blind — the basis of the neutrality principle — to the kinds of schools attended, the statute did not impermissibly aid religion. It made no difference that more than 90 percent of the benefits passed to students attending religious schools.

Aguilar v. Felton (1985) dealt with New York City’s payments to public school teachers for teaching secular subjects to remedial students in parochial schools. In a 5-4 vote, the Court struck down the program because the teachers might be tempted to inject religious instruction in a pervasively religious environment. Twelve years later, in Agostini v. Felton (1997), the Court overruled its decision in Aguilar and in doing so altered the Lemon test.

It retained Lemon’s first two prongs — having a secular purpose and not effecting the advancement or hindrance of religion — but then established three criteria to determine effect:

These criteria were more in keeping with the Court’s emerging “neutrality”principle.

The Court extended the neutrality principle in Zobrest v. Catalina Foothills School District (1993), which held that a school district did not violate the establishment clause by furnishing a sign-language interpreter to a Catholic high school student under a federally funded program. Rather, the program provided neutral benefits “to a broad class of citizens.”

The Court relied on the “neutrality” doctrine once again in Zelman v. Simmons-Harris (2002), which dealt with the constitutionality of voucher programs. Under an Ohio program, parents of students could receive a voucher to send their child to a school of their choice. Although 96 percent of the students benefiting attended religious schools, the Court nevertheless ruled 5-4 that “a government aid program is not readily subject to challenge . . . if it is neutral with respect to religion.”

'Parochiaid' cases are difficult to reconcile with the First Amendment

“Parochiaid” cases are among the Court’s most difficult to adjudicate, primarily because they mirror the Court’s uncertain commitment to Thomas Jefferson’s “wall of separation between church and state,” a metaphor hotly disputed among judges, educators, religious leaders, and the public at large as a policy principle in American public life.

Indeed, the metaphor is rarely to be found any longer in Supreme Court opinions. Instead the Court has relied on less incendiary, more neutral terms, such as “benevolent neutrality,” as in Walz v. Tax Commission (1970), which expresses the view that the appropriate role of the government toward religion is neither hostility nor active support.