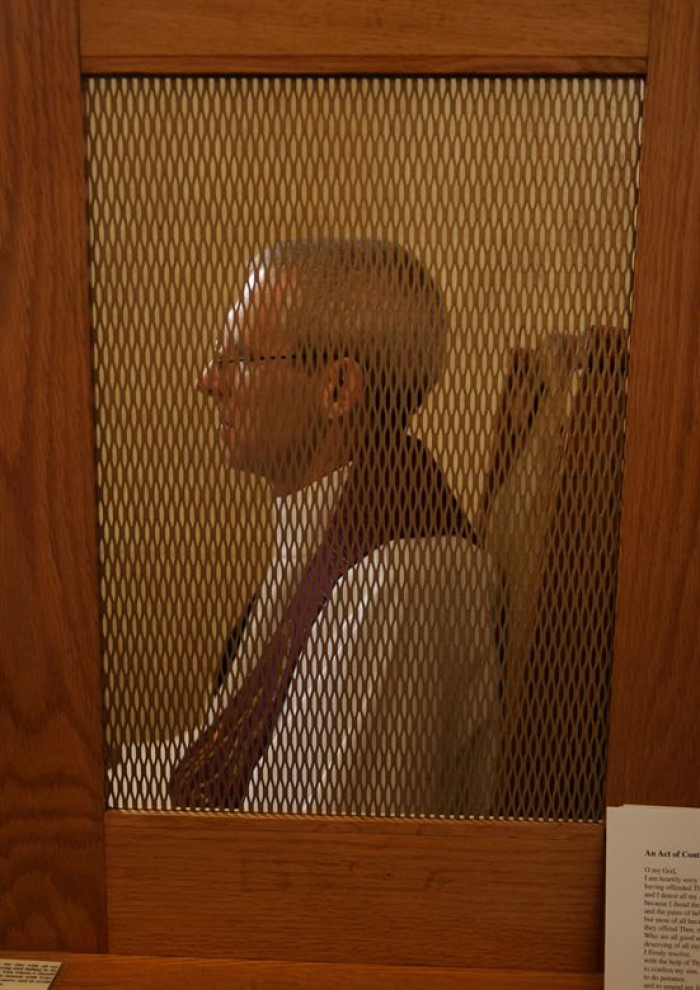 All U.S. states have laws protecting the confidentiality of certain communications under the priest-penitent privilege. The First Amendment is often considered the basis of such a privilege. In this photo, Capt. David McGuire, Chaplain, 86th Airlift Wing, sits at a confessional in the North Side Chapel, Ramstein Air Base, Germany, Feb. 25, 2010 (U.S. Air Force photo by Airman 1st Class Brittany Perry, public domain)

All U.S. states have laws protecting the confidentiality of certain communications under the priest-penitent privilege. The First Amendment is often considered the basis of such a privilege. Sometimes, however, the privilege is tied more to the idea that certain conversations (like those between spouses, attorneys and clients, couples and marriage counselors, or doctors and patients) are presumptively privileged, are covered by a right to privacy, or enjoy a privacy mandated by considerations of public policy, than to First Amendment free exercise rights.

Many religions have recognized the value of confession of sins. Roman Catholicism has done more than most to formalize such confessions by classifying confessions to a priest as a sacrament. In People v. Phillips (N.Y. 1813), a New York court defended this privilege on constitutional grounds, citing free exercise rights, and refused to force a priest to testify to information he had learned in the confessional about stolen jewelry. Since that case, there has been continuing controversy over whether the privilege, not recognized in English common law, is justified on chiefly constitutional or prudential grounds. The scope of the privilege also remains controversial.

Early cases led to legislation about what ministers could share

Several antebellum cases addressed similar issues. In People v. Smith (N.Y. 1817), a murder defendant unsuccessfully attempted to exclude testimony by his Protestant pastor, who did not believe he was obliged to conceal what he knew, but his testimony appeared to have aided the defendant’s version of events. Similarly, in Commonwealth v. Drake (Mass. 1818), a Massachusetts court refused to exclude testimony of members of a Baptist congregation to whom the defendant had confessed.

By 1923, 17 states and four American territories had similar legislation, and this number continued to grow. This trend gained momentum in 1953 when the American Bar Association and the National Conference on Uniform State Laws adopted Rule 29 of the Uniform Rules of Evidence providing for such a privilege. By 1963, 44 states had adopted such legislation, and all have it today.

Several lower courts have affirmed this privilege in recent years. In Mockaitis v. Harcleroad (1997), the Ninth Circuit Court of Appeals largely upheld the confidentiality of a confession between an inmate and a priest which an Oregon district attorney had secretly taped at the jailhouse. The Supreme Court cited this privilege both in the Watergate Tapes Case (United States v. Nixon [1974]) and in Trammel v. United States (1980), where it addressed spousal privilege.

The privilege is controversial

There is continuing controversy as to whether the privilege is possessed by the confessor, the clergyman, or both, and existing state laws differ on this matter. The issue of privilege can be especially challenging when it comes to cases involving child molestation or other heinous crimes.