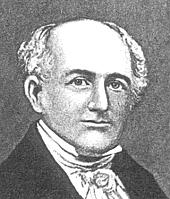 Commonwealth v. Kneeland (Mass. 1838) was the last case in the United States in which a man was jailed for blasphemy. In Abner Kneeland's case, he was convicted of blasphemy for publishing articles about prayer and the Immaculate Conception, and indicating he did not believe in God, Christ, miracles, the resurrection or immortality. The Massachusetts supreme court upheld the convictions. (Image via Wikimedia Commons, public domain)

In Commonwealth v. Kneeland, 37 Mass. 206 (1838), the Massachusetts Supreme Judicial Court upheld convictions for blasphemy resulting from the publication of several articles. Abner Kneeland was the last main jailed in the United States for blasphemy.

Kneeland was a popular lecturer and editor of the Jacksonian Investigator. He had been charged and convicted of three counts of blasphemy, the first two involving articles written by others about the Immaculate Conception and prayer and a third in which he had indicated that he did not believe in God, Christ, miracles, the resurrection, or immortality.

Kneeland had argued that his words were not blasphemous or libelous and that even if they were, the laws on the subject were unconstitutional. One statute prohibited persons from willfully blaspheming “the holy name of God, by denying, cursing, or contumeliously reproaching God, his creation, government, or final judging of the world.”

In the majority opinion for the court, Chief Justice Lemuel Shaw, a distinguished jurist, asserted that the lower court judgment proved that Kneeland had violated the law. As for the statute’s constitutionality, Shaw observed that neighboring jurisdictions in Maine, New Hampshire, New York, and Vermont had similar laws and that the New York law had been affirmed in People v. Ruggles (1811).

Kneeland had also argued that the blasphemy law violated both the articles of the state constitution guaranteeing “the liberty of the press” and the right to “worship.”

Shaw characterized Kneeland’s arguments on press freedom as overly broad and interpreted the right as chiefly prohibiting licensing laws and other “prior restraint,” rather than subsequent prosecution.

Although acknowledging that guarantees of religious liberty were designed to promote “the fullest inquiry, and the freest discussion, for all honest and fair purposes,” Shaw did not think the guarantee was designed to prohibit the enforcement of long-standing laws which had been “thought essential to preserve the sanction of oaths,” and which were designed to punish “acts which have a tendency to disturb the public peace.”

Judge Marcus Morton dissented. Acknowledging that freedom of the press referred chiefly to the prohibition against prior restraint, he was unwilling “to limit the operation of the article to this object alone.”

Morton agreed that freedom of the press did not prevent laws against libel, but did not think these to be at issue in this case. Morton gave “a liberal construction” to religious liberty that would include atheists as well as believers. Atheists, like believers, could be punished if they uttered words with “a criminal intent” or with “malice” as in cases where their object was “to calumniate, or wantonly or maliciously ... cause pain or injury to others, by wounding their feelings or corrupting their principles.”

If the Court was correct in believing that the statute prohibited mere denials of God’s existence, then it was unconstitutional. Morton opined, “What one man may assert, another may deny. No one may advocate an opinion which another may not controvert.”

The Court sentenced Kneeland to 60 days in jail.

Many leading intellectuals of the day signed petitions opposing the sentence, although conservative members of the clergy supported it. In Burstyn v. Wilson (1952), the Supreme Court ruled that a film could not be banned on the basis of being sacrilegious.