By David L. Hudson Jr.
Other articles in General Legal Concepts and Theories 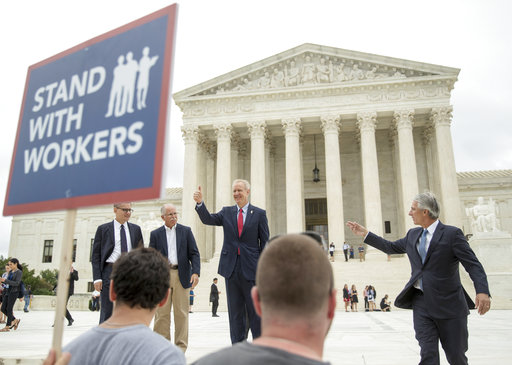 Illinois Gov. Bruce Rauner gives a thumbs up outside the Supreme Court, Wednesday, June 27, 2018 in Washington after a ruling that a state law requiring non-union government workers to contribute to labor unions that represent them in collective bargaining was a form of compelled speech and unconstitutional. From left are, Liberty Justice Center's Director of Litigation Jacob Huebert, plaintiff Mark Janus, Rauner, and Liberty Justice Center founder and chairman John Tillman.  (AP Photo/Andrew Harnik, courtesy of The Associated Press.)

The Supreme Court’s decision in West Virginia State Board of Education v. Barnette (1943) is the classic example of the compelled speech doctrine at work.

In oft-cited language, Justice Robert H. Jackson asserted, “If there is any fixed star in our constitutional constellation, it is that no official, high or petty, can prescribe what shall be orthodox in politics, nationalism, religion, or other matters of opinion or force citizens to confess by word or act their faith therein.”

Roberts: Government can't tell people what they must say

More recently, in Rumsfeld v. Forum for Academic and Institutional Rights (2006), Chief Justice John G. Roberts Jr. reiterated the essence of the compelled speech principle: “Some of this Court’s leading First Amendment precedents have established the principle that freedom of speech prohibits the government from telling people what they must say.”

The Court also employed the compelled speech doctrine in Wooley v. Maynard (1977) to rule that state officials could not punish a man for covering the state’s motto — “Live Free or Die” — on his license plate. Chief Justice Warren E. Burger declared, “The right to speak and the right to refrain from speaking are complementary components of the broader concept of ‘individual freedom of mind.’ ”

In more recent years, the Court recognized the reach of the compelled speech principle in Hurley v. Irish-American Gay, Lesbian and Bisexual Group of Boston (1995), in which it ruled that government officials could not force parade organizers to accept a gay and lesbian group and its messages as part of its event. To do so would infringe on the private group’s autonomy and right to disseminate its own messages.

The compelled speech principle also is at issue when the government attempts to force individuals or groups to financially support certain messages or programs. The Court refers to these as compelled-subsidy cases.

In Abood v. Detroit Board of Education (1977), the Court ruled that a teachers’ union had no authority, consistent with the First Amendment, to force dissenting nonmembers to fund activities not germane to the union’s central purpose of collective bargaining.

In a similar vein, in Keller v. State Bar of California (1990), the Court ruled that California’s state bar could not force attorneys to contribute to certain political and ideological causes that it supported. “Compulsory dues may not be expended to endorse or advance a gun control or nuclear weapons freeze initiative,” Chief Justice William H. Rehnquist wrote for the Court. He added, “At the other end of the spectrum petitioners have no valid constitutional objection to their compulsory dues being spent for activities connected with disciplining members of the Bar or proposing ethical codes for the profession.”

In a more recent 5-4 decision, the Supreme Court overuled Abood in 2018 when it found in Janus v. American Federation of State, County, and Municipal Employees, Council 31 that an Illinois law requiring non-union members to pay agency fees for the union to engage in collective bargaining and related activities amounts to an unconstitutional compelled speech. Under Abood, the Court had allowed union fees as a condition of employment, but prohibited the use of such fees for political activities.

Can government compel private entities to advance its ideas?

Difficulty arises in applying the compelled speech principle when it confronts other principles of First Amendment law, such as the government speech doctrine, which allows the government to advance its own ideas and messages, sometimes even through private entities.

For example, in Johanns v. Livestock Marketing Association (2005), the Court ruled that the government could force beef producers to fund certain generic beef advertisements. The ad said “Funded by America’s Beef Producers,” but the Court reasoned that the overarching message was the government’s, not the individual producers’.

“Citizens may challenge compelled support of private speech, but have no First Amendment right not to fund government speech,” Justice Antonin Scalia wrote for the Court.

In 2006 in Rumsfeld v. Forum for Academic and Institutional Rights, the Court ruled that there was no compelled speech problem with a federal law requiring law schools to provide military recruiters the same level of access as other recruiters. Many law schools had argued that the statute forced the law schools to support the military’s controversial “don’t ask, don’t tell” policy toward gays and lesbians in the armed services.

“There is nothing in this case approaching a Government-mandated pledge or motto that the school must endorse,” Chief Justice Roberts wrote in contrasting this case from a pure compelled speech decision like Barnette or Wooley.

However in National Institute of Family and Life Advocates v. Becerra (2018), the U.S. Supreme Court struck down two provisions of the California Reproductive Freedom, Accountability, Comprehensive Care, and Transparency Act (FACT Act), that required clinics that provide health service to pregnant women to include certain notices.  The Court narrowly ruled 5-4 that those notices amounted to content-based, compelled speech in violation of the First Amendment or were an unduly burdensome disclosure requirement.