By Ned Ramage (Updated May 2017 by John R. Vile)
Other articles in Issues Related to Speech, Press, Assembly, or Petition 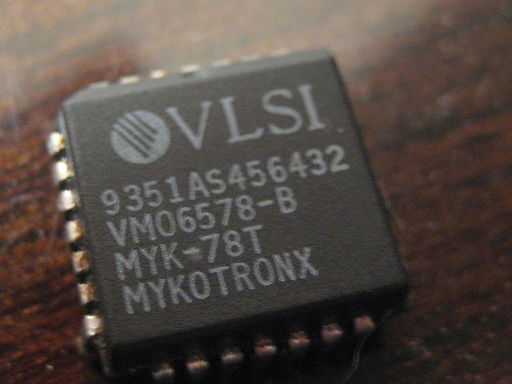 The Clipper Chip, announced by the White House in 1993, was an effort to establish a standard technology for telephone encryption with a built-in backdoor. It was not widely adopted because of fears it could lead to illegal government surveillance. Government efforts to control encryption brought opposition from those who argue that freely available encryption is a necessary part of free expression in the Internet age. (Photo of MYK-78 "Clipper Chip" package markings by Travis Goodspeed on Flickr, CC BY 2.0)

Encryption is the process of protecting information by rendering it unreadable by anyone without the specific knowledge necessary to decipher it. The advent of wide-scale electronic communication, such as with the Internet and e-mail, has brought the government’s desire to control encryption technology into sharp conflict with First Amendment and Fourth Amendment rights.

Although encryption has a long history and was used by some of America’s Founding Fathers to secure the privacy of their personal correspondence, the invention of the computer accelerated the development of complex encryption schemes that remained largely in the realm of government intelligence agencies until the widespread adoption of the Internet in the early 1990s. Though the government recognized the value of privacy in electronic communications, it also was concerned that widespread use of encryption could impair its ability to use wiretaps.

The Clipper Chip, announced by the White House in 1993, was an effort to establish a standard technology for telephone encryption. In 1994 President Bill Clinton signed an executive order that classified encryption technology as munitions and restricted its export.

In several lawsuits challenging the export restrictions, the plaintiffs argued that in order to create, study, and teach cryptography one must be free to communicate the processes involved. They contended that the requirement to obtain an export license before communicating internationally was an unconstitutional restraint of speech.

In Bernstein v. United States Department of State (N.D. Cal. 1997), Judge Marilyn Hall Patel found the export restrictions unconstitutional, and the government appealed. Before the appeals process was finished, the export restrictions were eased because of widespread opposition from the technology and civil liberties communities, and the case became moot. The opposition helped establish freely available encryption as a necessary part of free expression in the Internet age.

These same issues have resurfaced in the context of the USA Patriot Act and the expansion of the government’s electronic surveillance capabilities, especially as news stories in 2006 and 2007 revealed that the National Security Agency was engaged in warrantless surveillance of hundreds of millions of telephone conversations as part of the war on terrorism.

In general, the availability of encryption products allows people who require secrecy to secure their electronic communications, and encryption technology, which makes online commerce and online banking secure, has become a part of many of the computer systems in use today.

Recent years have witnessed a new round of controversy, pitting the government’s desire to combat terrorism and other crimes versus personal rights to communications and privacy.

After terrorist shootings in San Bernardino, Calif., the Federal Bureau of Investigation sought to force Apple to grant access to the encryption one of the terrorists had employed on his iPhone, and although the government eventually secured the information through alternate channels, FBI director James Comey continued to insist that encryption posed a continuing threat to law enforcement efforts.

D. Victoria Baranetsky has recently argued that the free press clause of the First Amendment is a solid basis on which to base the right of individuals to use encryption (2017).