By J. Michael Bitzer
Other articles in Legal Terms and Concepts Related to Speech, Press, Assembly, or Petition 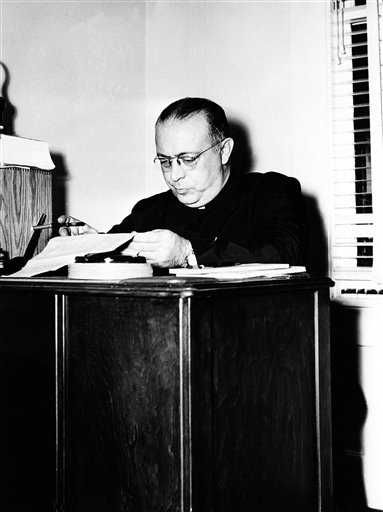 The Supreme Court elaborated on the fighting words doctrine in Terminiello v. Chicago (1949), in which the Court overturned on First Amendment grounds a disorderly conduct conviction against a suspended Catholic priest, Rev. Arthur Terminiello, for making inflammatory public comments. The Court narrowed the fighting words doctrine to speech that would “produce a clear and present danger of a serious intolerable evil that rises above mere inconvenience or annoyance.” In this photo, Terminiello reads a dispatch at Pensacola, Fla., May 16, 1949 of the Supreme Court ruling in his favor. (AP Photo, used with permission from the Associated Press)

The fighting words doctrine allows government to limit speech when it is likely to incite immediate violence or retaliation by the recipients of the words. Although this doctrine remains a notable exception to speech protected by the First Amendment, the Supreme Court has limited the scope of this doctrine when governments seek to restrict free speech.

The doctrine was developed in Chaplinsky v. New Hampshire (1942), when a unanimous Supreme Court issued a categorical exception to the First Amendment’s freedom of speech clause. In this case, Walter Chaplinsky, a Jehovah’s Witness who was distributing religious pamphlets, was instructed to cease by a city marshal. After Chaplinsky verbally denounced the marshal, police arrested him for violating a state law against name-calling in public or offensive speech.

Noting that previous decisions have sought a balance between freedom of speech and public order, Justice Francis W. Murphy, writing for a unanimous court, held that Chaplinsky’s speech was outside the bounds of First Amendment protection. When faced with “the lewd and obscene, the profane, the libelous, and insulting or ‘fighting’ words” — categories of speech that failed to possess any social value or contributed to the expression of ideas — government could restrict its expression to prevent disruptions.

After Chaplinsky, the Supreme Court elaborated on the fighting words doctrine. In Terminiello v. Chicago (1949), the Court narrowed the fighting words doctrine to speech that would “produce a clear and present danger of a serious intolerable evil that rises above mere inconvenience or annoyance.” In this ruling, the Court added context, along with attention to the content of the speech, to determine when the words uttered fall into constitutional protection or government limitation.

The Court has upheld convictions under the “breach of the peace” idea — such as in Feiner v. New York (1951), in which speech was not protected when there was a clear and present danger — while overturning convictions under this charge when government actors appeared to be criminalizing the peaceful expression of unpopular views — such as in Edwards v. South Carolina (1963).

Two cases focused on the latter aspect of the fighting words doctrine.

In Street v. New York (1969), the Supreme Court relied on the First Amendment to overturn the conviction of Sidney Street, who, upon hearing of the assassination of civil rights activist James Meredith, burned a U.S. flag and was arrested and convicted of violating a New York law that made it a misdemeanor to “publicly mutilate, deface, defile, defy, trample upon, or cast contempt upon an American flag either by words or act.”

The Court observed that while “it is conceivable that some listeners might have been moved to retaliate upon hearing appellant’s disrespectful words, we cannot say that appellant’s remarks were so inherently inflammatory as to come within that small class of ‘fighting words.’ ”

Again, in Cohen v. California (1971), the Court held that a man who wore in a courthouse a leather jacket imprinted with the words “Fuck the Draft” could not be convicted for disturbing the peace. The Court thus subjected prosecutions using the fighting words doctrine to the test constructed in Brandenburg v. Ohio (1969), which required “imminent lawless action and is likely to incite or produce such action.”

Subsequent Supreme Court cases have further refined the fighting words doctrine and its uses by governments.

For example, in Texas v. Johnson (1989) the Court held that burning the U.S. flag to express displeasure with government policies was constitutional and could not be subjected to the fighting words doctrine: “No reasonable onlooker would have regarded Johnson’s generalized expression of dissatisfaction with the policies of the federal government as a direct personal insult or an invitation to exchange fisticuffs.”

In R.A.V. v. St. Paul (1992), the Court held that even though St. Paul sought to use the fighting words doctrine to prevent cross burnings, the ordinance was unconstitutional because it did not subject other forms of speech or expression to the same standard.