By Emilie Kraft
Other articles in Issues Related to Speech, Press, Assembly, or Petition 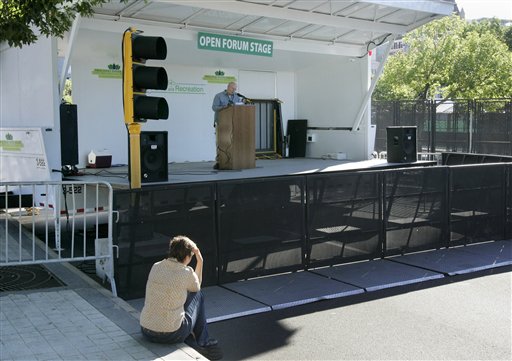 Free-speech zones refer to areas on college campuses and at certain public events, such as political conventions, specifically designated for protesters and demonstrators to exercise their right to freedom of speech. In this photo, a lone woman listens as Bryan Fish of St. Paul, Minnesota, delivers his speech in the free-speech zone set up within view of the Xcel Energy Center where the Republican National Convention was held Sept. 3, 2008 in St. Paul. (AP Photo/Jim Mone, used with permission from the Associated Press)

Free-speech zones refer to areas on college campuses and at certain public events, such as political conventions, specifically designated for protesters and demonstrators to exercise their right to freedom of speech.

Free-speech zones, which first appeared in the context of college and university campuses, became a widespread phenomenon in the 1980s and 1990s. They generally limit protest activity to one or more designated areas on a campus, restricting such activity in all other areas.

University officials claim free-speech zones are necessary to prevent disruption of classes and that the policies are content-neutral time, place, and manner restrictions. To pass constitutional muster, such regulations must fulfill three rules:

Free-speech zone policies, like any other time, place, and manner restriction, are not content neutral if school officials have “unbridled discretion” to enforce them, because such discretion allows officials to inject viewpoint-based factors into the process.

School officials often argue that their campuses are limited public fora as opposed to traditional public fora, and so they are allowed to place more restrictions on speech. Although a campus’s classification depends on the facts of each case, the Supreme Court did generally recognize in Widmar v. Vincent (1981) “that the campus of a public university, at least for its students, possesses many of the characteristics of a public forum.”

Many First Amendment advocacy groups, such as the Foundation for Individual Rights in Education (FIRE), believe free-speech zones on campuses are unconstitutional, and several groups, as well as university students themselves, have challenged free-speech zone policies both in and out of court with mostly successful results.

In 2000 the New Mexico chapter of the American Civil Liberties Union (ACLU) and two New Mexico State University students filed suit, challenging that school’s free-speech zone policy. The university settled out of court and revised its policy, so that all outdoor areas generally accessible to the public can be used for petitioning, protesting, and related activities.

In June 2002, students and faculty at West Virginia University filed suit against that school, alleging that its free-speech zone policy, which designated seven small areas making up less than 5 percent of the total campus as free-speech zones, was unconstitutional. By December 2002, the university had abandoned the policy.

In June 2006, the University of Nevada at Reno changed its free-speech policy after student activists, aided by the ACLU of Nevada and FIRE, challenged the policy. FIRE has helped students challenge similar policies at other schools, including Shippensburg University in Pennsylvania, Citrus Community College in California, and Texas Tech.

Students have had successes in court against campus zones

Students have succeeded in the courts as well, even though the general public does not necessarily have the same rights students enjoy on their campuses.

Free-speech zones are becoming common at some public events

At the 2000 Democratic National Convention held at the Staples Center in Los Angeles, police set up a “secured zone,” which could be entered only by those with an actual convention ticket, and a “demonstration zone,” which was the only place protesters were allowed to demonstrate.

Several groups of protesters filed for a preliminary injunction in federal court, which it granted. The court held that the secured zone comprised sidewalks and streets, which constituted a traditional public forum. The court further held that the planned regulation was not narrowly tailored and did not provide adequate alternative means of communication, because at all times it kept demonstrators too far away from their intended audience — convention attendees. The court significantly noted that “banning speech is an unacceptable means of planning for potential misconduct.”

Zones set up because of security concerns

Since the terrorist attacks of Sept. 11, 2001, however, creating secured zones and denying demonstrators’ permits are becoming increasingly common, and the courts are more likely to allow them, especially in areas with a heightened security risk.

In United for Peace and Justice v. City of New York (S.D.N.Y. 2003), a federal district court held that the city permissibly banned marches past the United Nations, an area of the city that posed a high security risk. The 1st U.S. Circuit Court of Appeals recognized such security concerns when it denied a preliminary injunction to demonstrators challenging the proposed “demonstration zone” near the 2004 Democratic National Convention in Boston.

In Bl(a)ck Tea Society v. City of Boston (1st Cir. 2004), the court held that alternative channels for communication were available in the vicinity of the Fleet Center and throughout Boston. In an almost regretful concurrence in Bl(a)ck Tea Society, Judge Kermit V. Lipez voiced what is undoubtedly on the minds of many judges who must consider such cases: “The risks of violence and the dire consequences of that violence seem more probable and more substantial than they were before 9/11. When judges are asked to assess these risks in the First Amendment balance, we must candidly acknowledge that they may weigh more than they once did.”

Despite security concerns, the George W. Bush administration’s regular use of the Secret Service to quarantine protesters — particularly those who disagreed with Bush — drew criticism from both sides of the aisle. The ACLU filed a nationwide suit on behalf of protesters who had been forced into “free-speech zones,” but the complaint was dismissed because “the plaintiffs’ claims [were] too amorphous to be justiciable at this point in time.”

Protesters in Florida filed a similar case, which was dismissed on similar grounds.

The jurisprudence on free-speech zones, in the university setting and elsewhere, continues to evolve and will undoubtedly remain part of the heated debate over the need for security and the need to protect civil liberties.