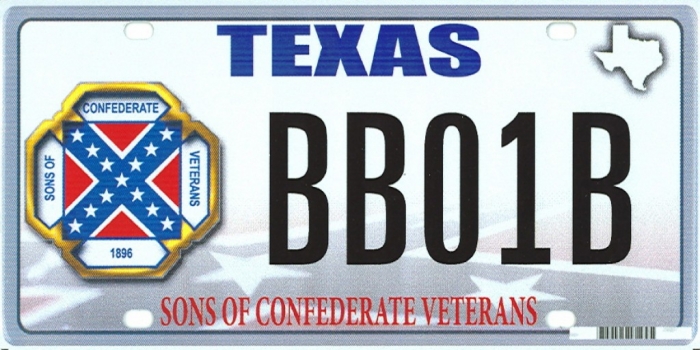 In recent years, the Supreme Court has expanded the government speech doctrine, such as in a Texas case in which it ruled the state could deny a speciality license plate to a group that wanted to use an image of the Confederate battle flag. (Photo, public domain)

Under the government speech doctrine, the government has its own rights as speaker, immune from free speech challenges. It can assert its own ideas and messages without being subject to First Amendment claims of viewpoint discrimination.

The Supreme Court has employed the doctrine to reject First Amendment based challenges to government programs. For example, the high court ruled in Rust v. Sullivan (1991) that the government could prohibit doctors who receive federal funds for federal health family planning services from discussing abortion with their patients. Chief Justice William H. Rehnquist concluded that “The Government can . . . selectively fund a program to encourage certain activities it believes to be in the public interest, without at the same time funding an alternate program which seeks to deal with the problem in another way.”

Several years later, the Court ruled, in Johanns v. Livestock Marketing Association (2005), that the government could require beef producers to contribute monies to support a generic advertising program for beef because “the government sets the overall message to be communicated and approves every word that is disseminated.” In other cases the Court has rejected application of the doctrine. In Legal Services Corp. v. Velazquez (2001), the Court invalidated a federal law prohibiting attorneys who receive federal monies under a legal services plan from challenging existing welfare laws. The Court wrote that the legal services “program was designed to facilitate private speech, not to promote a governmental message.”

Doctrine has expanded to monuments and specialty license plates

In more recent years, the Court has expanded the government speech doctrine in cases involving monuments in public parks and specialty license plates.  In Pleasant Grove v. Summum (2009), the Court ruled that a Utah city could deny placement of a religious monument in a public park, because such monuments were a form of government speech. In Walker v. Texas Division, Sons of Confederate Veterans (2015), the Court ruled that the state of Texas could deny a specialty license plate to a group that wanted to place an image of the Confederate battle flag on the plates.

Doctrine is not always precise

The contours of the government speech doctrine have not been delineated with much precision. Justice David H. Souter expressed this point in his dissent in Johanns, when he wrote, “The government-speech doctrine is relatively new, and correspondingly imprecise.” The doctrine also has its share of critics. Legal commentators Randall Bezanson and William Buss explain that “viewing government as a First Amendment right holder is not supported by, and is inconsistent with, the text of the First Amendment and the purposes underlying the text” (p. 1508).

However, despite the criticism, more governmental entities are asserting the government speech defense to a variety of First Amendment challenges.  This trend likely will continue.