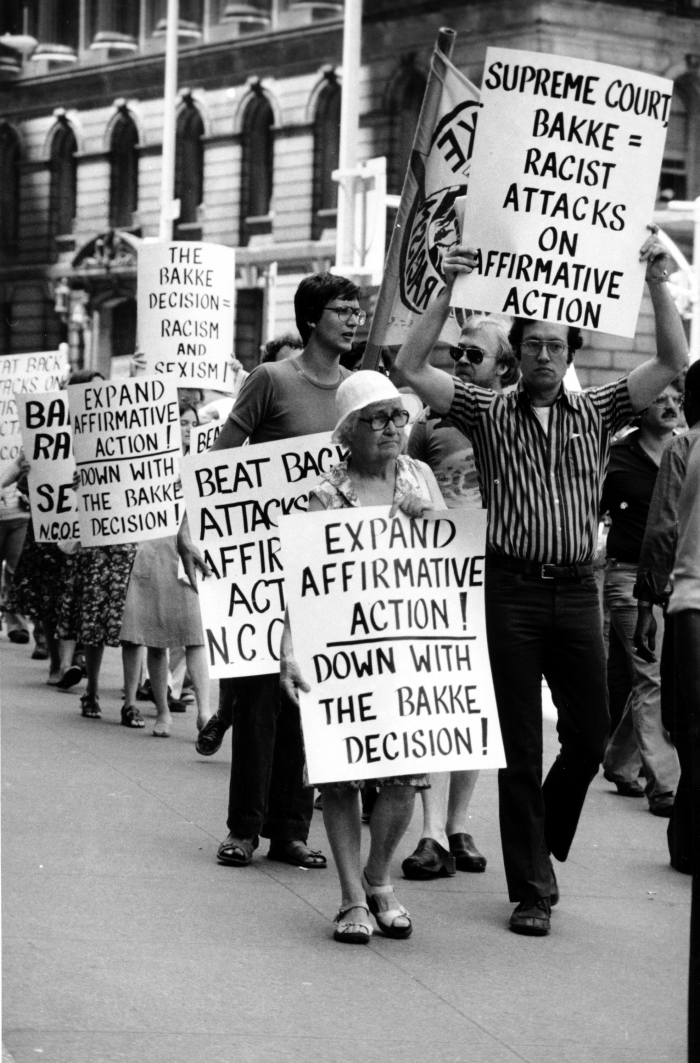 The Supreme Court has upheld affirmative action by universities seeking more racial diversity in their student bodies, relying partly on the idea that the First Amendment and academic freedom allows colleges to choose their own student body. The constitutional rights in the First Amendment were first raised in an affirmative action case by Justice Lewis Powell Jr. (Regents of the University of California v. Bakke, 1978) although the high court ultimately ruled against the university. In a later case, Justice Clarence Thomas wrote a dissenting opinion that rejected that the First Amendment could authorize "a public university to do what would otherwise violate the Equal Protection Clause."  In this photo, demonstrators from an organization calling itself Anti-Bakke Decision Coalition carry signs as they march in New York City in 1978 to protest the decision. (AP Photo/Dan Goodrich)

Throughout much of U.S. history, racial classifications have been used to discriminate against African Americans, most of whose ancestors were originally brought to the New World as slaves or were born into slavery there.

Even after ratification of the Fourteenth Amendment (1868) guaranteeing equal protection of the laws, the Supreme Court upheld racial segregation under the doctrine of separate but equal in Plessy v. Ferguson (1896). This policy remained law until the Court, led by Chief Justice Earl Warren, reversed Plessy in Brown v. Board of Education (1954). Originally mandating desegregation in education, Brown has subsequently been applied to all areas of public racial discrimination.

Some advocates of racial equality argued the necessity of using minority race status as a positive factor in college admissions and employment to help minorities overcome the effects of past discrimination by enabling them to catch up educationally and economically.

Proponents of such “affirmation action” also justified racial preferences on the basis of creating role models within minority communities, bringing professional services to such communities, and increasing diversity.

Absent compensating individuals for discrete instances of past discrimination, the Supreme Court chose to subject all racial preferences to strict scrutiny, requiring government to show a compelling interest to justify them. In some cases, such scrutiny has allowed for positive considerations of race as long as they fall short of strict racial quotas that treat individuals as members of racial classes rather than as discrete individuals.

Two of three prominent Supreme Court cases dealing with affirmative action programs in education have relied in part on the First Amendment.

Four justices would have admitted Bakke on the basis that all considerations of race were impermissible under the Fourteenth Amendment in circumstances where the school had no past history of racial discrimination. Four others would have accepted racial preferences and even racial quotas as appropriate. Justice Lewis F. Powell Jr. split the difference. Of significance, he relied in part on the First Amendment.

Powell observed that “Academic freedom, though not a specifically enumerated constitutional right, long has been viewed as a special concern of the First Amendment. The freedom of a university to make its own judgments as to education includes the selection of its student body.”

Powell further observed that “in arguing that its universities must be accorded the right to select those students who will contribute the most to the ‘robust exchange of ideas,’ petitioner invokes a countervailing constitutional interest, that of the First Amendment.”

Powell subsequently argued that the university could exercise its freedom to give some weight to race in its admissions process, as long as it did not use strict quotas, as he believed the University of California had improperly done.

The Court encountered two similar cases in 2003. Justice Sandra Day O’Connor — in upholding what she considered to be narrowly tailored use of racial preferences at the University of Michigan Law School in Grutter v. Bollinger (2003) — cited Powell’s earlier use of the First Amendment in her lead opinion.

Justice Clarence Thomas attempted to answer in a partial dissent joined by Justice Antonin Scalia. Tracing what he called “the constitutionalization of ‘academic freedom’ ” back to Sweezy v. New Hampshire (1957) and Keyishian v. Board of Regents (1967), Thomas wrote that “ ‘it is the business’ of this Court to explain itself when it cites provisions of the Constitution to invent new doctrines — including the idea that the First Amendment authorizes a public university to do what would otherwise violate the Equal Protection Clause. The majority fails in its summary effort to prove this point.”

The Court did not raise the First Amendment in the companion case of Gratz v. Bollinger (2003), in which Chief Justice William H. Rehnquist wrote a decision classifying the admissions policy of the University of Michigan’s undergraduate college, which awarded a fixed number of points to the applications of minorities, as the kind of quota that the Court had prohibited in the Bakke. With recent changes on the U.S. Supreme Court, it may well revisit this issue in the near future