By James L. Walker
Other articles in Issues Related to Speech, Press, Assembly, or Petition 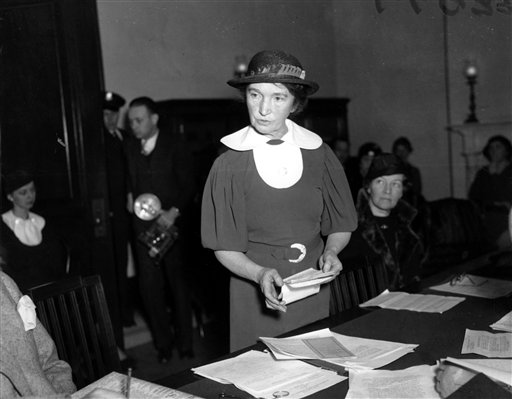 In this March 1, 1934 file photo, renowned birth control pioneer Margaret Sanger appeals before a Senate committee for federal birth-control legislation in Washington, D.C. Sanger's legal appeals eventually prompted federal courts to grant physicians the right to give advice about birth-control methods. Such communication had not been protected by the First Amendment. She began her crusade back in 1912 when she was working on the lower east side of New York and saw women resorting to back alley, illegal abortions. One too many of these women died in her arms and she said "Enough." Sanger, together with philanthropist Katharine McCormick, bankrolled the work of Gregory Pincus, the man Sanger convinced to develop the pill. (AP Photo/File, used with permission from the Associated Press)

Birth control, or contraception, is a practice, material, or device by which sexual intercourse can be rendered incapable of producing a pregnancy. Throughout history, women and men have practiced birth control in a wide variety of ways. Only in the last two centuries, however, has birth control become a matter of public debate. Speaking and writing about birth control have not always received strong First Amendment protection.

Birth control was once treated as obscene

Largely scorned and even condemned by public officials (President Theodore Roosevelt referred to it as “suicide of the race”), birth control was once treated as immoral and obscene by lawmakers. The 1873 Comstock Act, a federal law designed to prevent the distribution of immoral material, was used to censor communication about birth control, thereby placing medical advice and pornographic literature on the same plane. The well-known feminist Margaret Sanger, an early advocate of birth control, was arrested in 1929 after giving a speech about its practice.

Even though individual states eventually began to allow birth control clinics, many of them publicly funded, the courts did not rule until much later that communication about the subject was protected.

As the U.S. culture began to change, especially after the development of an oral contraceptive in the 1960s, opposition to birth control in general was heard infrequently, except from some religious institutions, especially the Roman Catholic Church.

Meanwhile, Connecticut, a state with a largely Catholic population, had a rarely enforced law on its books that completely outlawed birth control. In the strange but important case of Griswold v. Connecticut (1965), the U.S. Supreme Court ruled that the state must have compelling reasons for outlawing birth control, finding that there was a fundamental right to privacy, which included the right of married couples to control their fertility. Justice William O. Douglas delivered the opinion (7-2) of the Court in which the First Amendment was implicated only tangentially, as part of the constellation of rights in the Third, Fourth, Fifth, Ninth, and, most important, 14th amendments, the penumbras of which create a zone of privacy that the government dare not enter lightly.

Seven years later, in Eisenstadt v. Baird (1972), the Court further extended the right to birth control by striking down on equal-protection grounds a Massachusetts law criminalizing the distribution of birth control to unmarried persons. The Court again refused to base its decision on the First Amendment, even though Justice Douglas urged it to do so in his concurrence.

It was not until 1977 that the Court squarely addressed the First Amendment implications of birth-control information. In Carey v. Population Services International (1977), the Court extended First Amendment protection to advertisements of contraceptives. A corporation that advertised contraceptives in periodicals had challenged a New York statute prohibiting advertisements and displays of such products. New York based its law on the claims that advertisements of contraceptive products could be offensive and embarrassing and that permitting them would legitimize sex among young, unmarried people.

The Court rejected both bases as insufficient to support a restriction on First Amendment rights. It said that, short of obscenity, no speech may be suppressed on the grounds that it may offend some, citing Cohen v. California (1971). It also noted that the state could not demonstrate that advertising birth control affected the sexual behavior of minors. Thus the statute suppressed protected consumer information on contraceptives and so was a violation of First Amendment rights.

Later, the Court extended the Carey protection to advertisements and products sent to consumers through the mails. In Bolger v. Young’s Drug Products Corp. (1983), the Court held that federal restrictions on the free flow of truthful information on contraception constitutes a basic constitutional defect within the meaning of the First Amendment, regardless of the strength of the government’s interest.

The right to refuse to dispense birth control is being debated

Yet another example is Catholic Charities of Sacramento, Inc. v. Superior Court (2004) in which the California Supreme Court rejected First Amendment challenges to the state’s compulsory contraceptive health insurance coverage law. Catholic Charities, as a religious employer whose tenets of faith oppose birth control, claimed a constitutional right to refuse such insurance. The U.S. Supreme Court refused to review the decision.