By Brandon R. Burnette
Other articles in Issues Related to Speech, Press, Assembly, or Petition 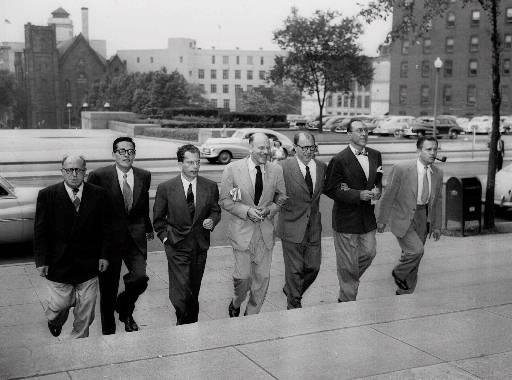 In the context of the 1940s and 1950s, a blacklist was a list of persons whose opinions or associations were deemed politically inconvenient or commercially troublesome, thereby subjecting them to either difficulty finding work or termination from employment. During this period, blacklists became particularly prominent in the industries investigated by the House Un-American Activities Committee (HUAC) for possible links to the Communist Party of the United States, most notably Hollywood film making. HUAC was seeking to purge the country of any communist influences. In this photo, seven Hollywood figures of the Hollywood Ten arrive at U.S. Federal Court in Washington June 22, 1950, to face charges of contempt for defiance of the House Committee on Un-American Activities. From left to right, Samuel Ornitz, Ring Lardner Jr., Albert Maltz, Alvah Bessie, Lester Cole, Herbert Biberman, and Edward Dmytryk. (AP Photo, used with permission from the Associated Press)

In the context of the 1940s and 1950s, a blacklist was a list of persons whose opinions or associations were deemed politically inconvenient or commercially troublesome, thereby subjecting them to either difficulty finding work or termination from employment.

During this period, blacklists became particularly prominent in the industries investigated by the House Un-American Activities Committee (HUAC) for possible links to the Communist Party of the United States, most notably Hollywood film making. HUAC was seeking to purge the country of any communist influences.

HUAC hearings concerning Hollywood were prompted when the Screen Writers Guild (SWG) became the writers’ official bargaining agent in the 1930s. The extreme right saw the unionization of writers as the first step toward the domination of the screen by communists. Those who joined the Communist Party often did so because of social conscience at a time when it was in the business of fighting racism and the economic depression at home and fascism abroad.

In the 1940s, U.S. Communists generally did not see themselves as defending the Soviet Union; rather, they were defending the “free world,” of which Russia was considered to be a part. In the 1930s and 1940s, communist screenwriters defended the Stalinist regime because, as U.S. screenwriter and author Albert Maltz once said, “There was very little available knowledge of the U.S.S.R.”

The Motion Picture Alliance for the Preservation of American Ideals (MPA), an organization that wanted to defend the movie industry against communist infiltration, encouraged HUAC to investigate communism in Hollywood. In May 1947, members of the MPA testified before the committee on that subject during closed hearings. As a result, many people in the entertainment industry were subpoenaed for the October 1947 hearings by the HUAC. Those subpoenaed were either “friendly” or “unfriendly” witnesses.

In holding its hearings, HUAC had two main purposes. First, it intended to prove that the SWG had members who were communists. Second, it hoped to show that these writers were able to insert subversive propaganda into Hollywood films. But Jack Warner of Warner Brothers, the first witness at the October hearings, assured HUAC that no “subversive propaganda” had ever been in any Warner Brothers films.

'Hollywood Ten' could make no protest while testifying

When the first of the “unfriendly” witnesses, John Howard Lawson, asked permission to read a statement, HUAC chairman John Parnell Thomas insisted on reading the statement before granting permission. Outraged by Lawson’s critique of HUAC, Thomas denied the request, and the interrogation was under way.

Lawson was gaveled into silence every time he started to say something beyond what he was asked. He then grew angrier and angrier as Thomas’s gavel cut him off. He was able, however, to make a few protests by saying, “The question of Communism is in no way related to this inquiry, which is an attempt to get control of the screen and to invade the basic rights of American citizens in all fields.” He refused to answer the question “Are you now or have you ever been a member of the Communist Party?”

Lawson was eventually ordered off the witness stand and cited for contempt of Congress. The rest of those who became known as the “Hollywood Ten” tried to express their views, but most had little chance to make any form of a protest before being gaveled and hauled off the stand.

Opponents of the contempt citations argued that HUAC had conducted its inquiry illegally by violating the constitutional rights of free speech and thought. In speaking out against the committee, Rep. Herman P. Eberharter of Pennsylvania asserted that the House had the choice of supporting either HUAC or free speech. “We cannot do both,” he said. “I cannot escape the conclusion . . . that the purpose of this committee was not to destroy an existent subversive threat in Hollywood, but to intimidate and control the movie industry.”

Communists in Hollywood were put on a blacklist

In November 1947, film executives and producers met in New York and issued the Waldorf Statement, which declared that they would not hire any member of the Hollywood Ten unless he was acquitted or had declared under oath that he was not a communist. They also would not knowingly hire anyone who was a communist. After being cited for contempt, the Hollywood Ten went to jail in 1950 once their appeals were exhausted.

During the second set of HUAC hearings in 1951, many of those subpoenaed used the Fifth Amendment to avoid self-incrimination, and some of them named names of those they believed to be communists. Because of the blacklist, some screenwriters had to leave the country to find work. Many had to resort to using pseudonyms to continue working.

The beginning of the end of the Hollywood blacklist took place in 1960 when actor and producer Kirk Douglas gave screenwriting credit to Dalton Trumbo for the movie "Spartacus." Unfortunately, after the blacklist was lifted most of those on it were not able to resume their careers in the entertainment industry.

This article was originally published in 2009. Brandon R. Burnette is an Associate Professor at Southeastern Oklahoma State University as the Government Documents/Reference Librarian. He is an author of a three-part series of articles entitled “Historic Indian Publications by the US Federal Government,” DTTP: Documents to the People (2015).