By Dara Purvis
Other articles in Issues Related to Speech, Press, Assembly, or Petition 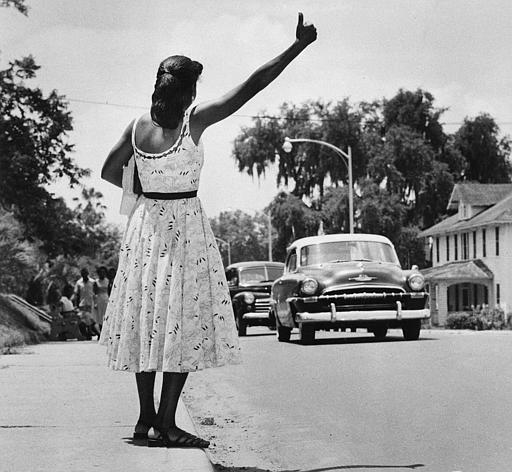 Through boycotts, groups agree and often attempt to persuade others to refuse to patronize certain businesses. Courts have recognized boycotts as having First Amendment protection if their goal is to influence political and social change rather than to obtain economic gain. In this photo, Florida A & M University student Ruby Powell thumbs a ride during the pro-integration Tallahassee bus boycott, June 1, 1956. It was the fifth day of the boycott. (AP Photo, used with permission from the Associated Press)

Through boycotts, groups agree and often attempt to persuade others to refuse to patronize certain businesses. Courts have recognized boycotts as having First Amendment protection under limited circumstances.

In a series of cases, the Supreme Court has established an analysis of boycotts that considers the following issues: Is economic damage to the targeted businesses the goal or the means of the boycott? Is the goal to influence political action or merely to inflict economic harm on the businesses?

An individual consumer’s choice of whether to patronize a certain business is a private action that does not raise any First Amendment issues. Boycotts, however, are organized campaigns to influence other peoples’ choices. There is thus a tension between the First Amendment rights of boycott organizers to convince others to join their campaign of petitioning for change, and antitrust and restraint of trade laws intended to prohibit harmful economic manipulation, such as price fixing or conspiratorial behavior.

In Eastern Railroad Presidents Conference v. Noerr Motor Freight (1961), the Supreme Court confronted a conflict that developed after an association of railroad presidents hired a public relations firm both to lobby the Pennsylvania government to pass laws restricting the ability of truckers to carry freight on the state’s roads and to conduct a negative publicity campaign against truckers. A group of Pennsylvania truck operators and their trade association sued, alleging that the railroads’ campaign violated the Sherman Anti-Trust Act of 1890 by seeking to destroy trucking competition.

Justice Hugo L. Black, writing for the Court, described the “true nature of the case — a ‘no-holds-barred fight’ between two industries both of which are seeking control of a profitable source of income.” He found that the main goal of the railroads’ public relations campaign was to influence government policy and legislation — specifically, to enforce existing trucking regulations more strictly and to pass new legislation tightening restrictions. The Court therefore ruled that “solicitation of government action” could not be a violation of the Sherman Act. As the main question decided was whether the public relations firm’s actions had violated the Sherman Act, the decision did not speak directly to any First Amendment concerns.

Noerr became an important precedent, however, in perhaps the best-known case regarding a boycott: NAACP v. Claiborne Hardware Co. (1982). In 1966 African Americans in Clairborne County, Mississippi, participated in a sustained boycott of white-owned businesses, hoping to put pressure on local government and business leaders to meet their 19 “Demands for Racial Justice.” The document, drafted by the local chapter of the National Association for the Advancement of Colored People (NAACP), laid out specific measures to advance the civil rights of African Americans, from desegregation of bus stations to asking that blacks be addressed as “Mr.” and “Mrs.” rather than derogatory terms such as “boy.” Three years later, a group of white business owners sued the NAACP and its leaders, who had organized and enforced the boycott, for the economic damages they had suffered.

After the case made its way through the lower courts, the Supreme Court ruled that the NAACP’s boycott was composed of elements protected by the First Amendment: speech, assembly, and petition. The Court also paid particular attention to the end goal of the boycotters. Writing for the Court, Justice John Paul Stevens compared the NAACP boycott campaign with the railroad association’s public relations campaign in Noerr and concluded that the boycott was entitled to even greater protection.

Stevens first noted the similarities: “the petitioners certainly foresaw — and directly intended — that the merchants would sustain economic injury as a result of their campaign.” However, he continued, “unlike the railroads, . . . the purpose of petitioners’ campaign was not to destroy legitimate competition.” Whereas the railroads had attempted to threaten the competing trucking industry’s economic survival, the NAACP leaders and African American boycotters “sought to vindicate rights of equality and of freedom that lie at the heart of the Fourteenth Amendment itself.”

Court struck down boycott that had goal of economic gain

The Court’s focus on boycotts’ goals led to a different result in Federal Trade Commission v. Superior Court Trial Lawyers Association (1990). In this case, a group of court-appointed lawyers who represented indigent criminal defendants began a boycott, refusing to take on new cases in a successful attempt to convince the District of Columbia government to raise their salaries. Writing for the Court, Justice Stevens upheld the FTC’s complaint that the boycott had violated the Federal Trade Commission Act’s prohibition of agreeing to restrain trade in violation of anti-trust laws. Stevens drew a distinction between Noerr, in which “the alleged restraint of trade was the intended consequence of public action,” and the lawyers’ boycott, in which “the boycott was the means by which respondents sought to obtain favorable legislation.”

Stevens further explained that the goal of the boycott also resulted in an important distinction: whereas the lawyers sought economic gain for themselves, the boycotters in Clairborne Hardware “sought only the equal respect and equal treatment to which they were constitutionally entitled.”

Boycotts to influence political reform are protected by the First Amendment

In analyzing whether a boycott is a protected First Amendment activity, a court first determines whether the boycott’s goal is political reform — with particular attention paid to whether the boycotters are acting on behalf of a constitutional right — or purely economic in nature.

If a boycott is an attempt to influence political reform, it will likely be considered to be protected by the First Amendment. If the boycott’s goal is economic, however, the court will likely consider it as purely economic activity rather than First Amendment expression or petition.

Using this logic, a number of  “secondary boycotts,” or boycotts against third parties in the hope of convincing them to stop doing business with the primary target of the boycott, have been ruled outside the protection of the First Amendment and properly prohibited by labor union laws.