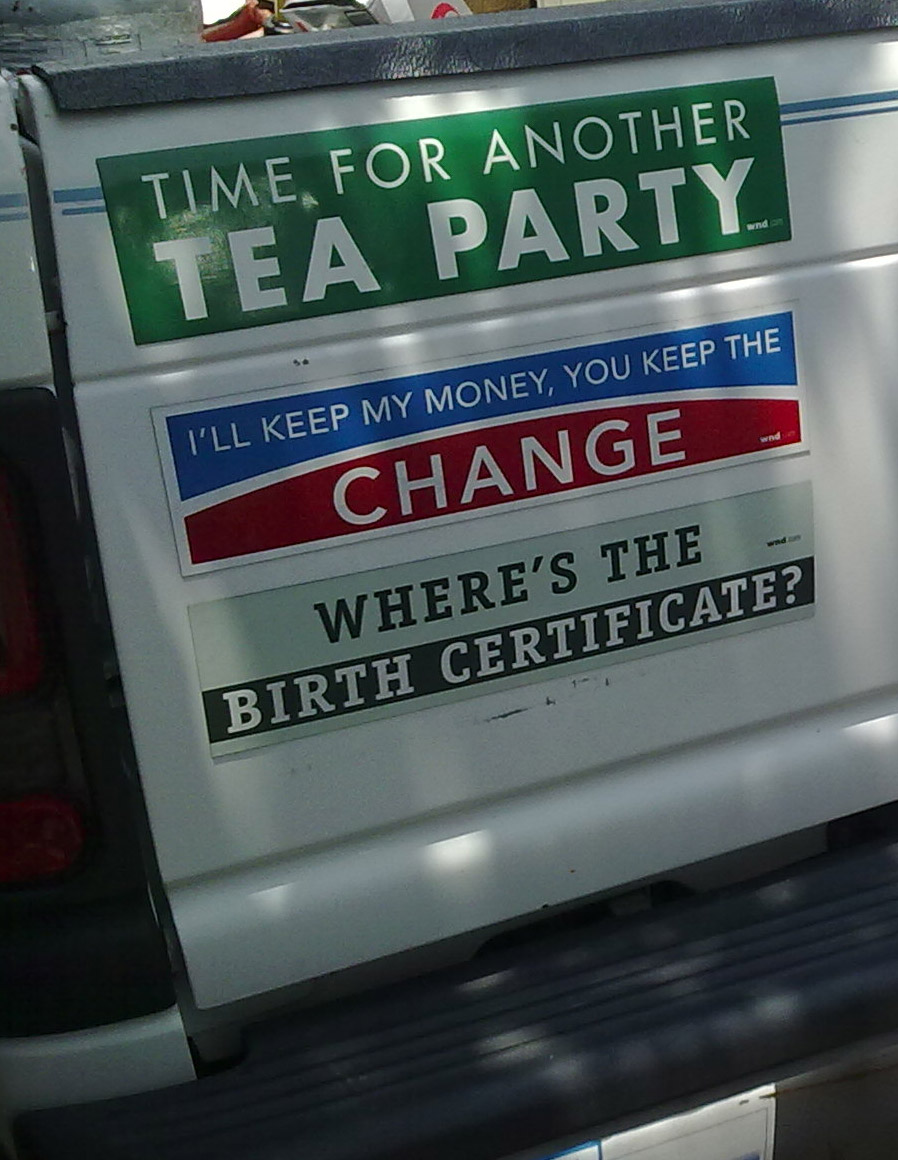 Bumper stickers remain a ready outlet for citizens to express themselves on a variety of topics — political candidates, environmental causes, religion, sports teams, just about any subject imaginable. They also present intriguing fre expression issues when the government decides to prosecute the displayer of an offensive bumper sticker.

A few states have statutes that criminalize the display of obscene bumper stickers. For example:

The constitutionality of criminalizing bumper stickers remains in serious doubt, because it is hard to imagine a bumper sticker that actually meets the legal definition of obscenity.

Several courts have invalidated convictions based on the display of profane bumper stickers. For example, in Cunningham v. State (1991) the Georgia Supreme Court reversed the conviction of a man whose vehicle displayed a bumper sticker that said “Shit Happens.”

The court concluded that “the provision regulating profane words on bumper stickers reaches a substantial amount of constitutionally protected speech and unconstitutionally restricts freedom of expression” under the First Amendment.

Similarly, a federal district court in Alabama reversed the conviction of a truck driver whose vehicle bore the bumper sticker “How’s My Driving? Call 1-800-EAT SHIT!” Ruling in Baker v. Glover (1991), the court held that the bumper sticker was protected under the First Amendment “because it has serious literary and political value.”

The judge wrote: “Although surely not a likely candidate for a literary prize, Baker’s bumper sticker has serious literary value as a parody of stickers, such as ‘How’s My Driving? Call 1-800-2-ADVISE. . . . Baker’s sticker also has political value as a protest against the ‘Big Brother’ mentality promoted by such other bumper stickers that urge the public to report the indiscretions of truck drivers.”

In Louisiana, an appeals court reversed the conviction of a former deputy for disturbing the peace — his truck displayed a bumper sticker that said, “Fuck Charles Foti, Jr.,” the sheriff of Orleans parish, for whom Meyers had previously worked.

The state appeals court reasoned in Louisiana v. Meyers (1984) that the conviction could not stand in light of the U.S. Supreme Court decision in Cohen v. California (1971), which invalidated the conviction of a man who wore in a California courthouse a jacket bearing the words “Fuck the Draft.”

For public employees, protection for bumper stickers is less clear

In Williams v. McKee (2016), the 10th U.S. Circuit Court of Appeals ruled that a detention officer with a Colorado sheriff’s officer could be fired for refusing to remove a bumper sticker on his vehicle that read: “Still voting Democrat? You’re so stupid.”

The appeals court reasoned that the bumper sticker contained “language [that] could easily spark conflict with fellow employees or the public.”

However, other courts have sided with public employees who have challenged restrictions on bumper stickers.

In Goodman v. Kansas City (1995), a federal district court in Missouri invalidated a regulation that prohibited city employees from displaying political bumper stickers on their vehicles. The court concluded that “the right to express oneself about issues and candidates at election time is an essential part of our constitutional democracy.”

Members of the armed forces and civilians on military bases may well have little First Amendment protection from a bumper sticker regulation.

In Ethredge v. Hail (1995), the 11th U.S. Circuit Court of Appeals upheld an air force administrative order that barred bumper stickers that “embarrass or disparage” the president. Jesse Ethredge, a civilian aircraft mechanic on an air force base, unsuccessfully challenged the policy in federal court. The Eleventh Circuit granted great deference to military authorities and reasoned that the regulation furthered the military’s interests in maintaining good order and discipline.