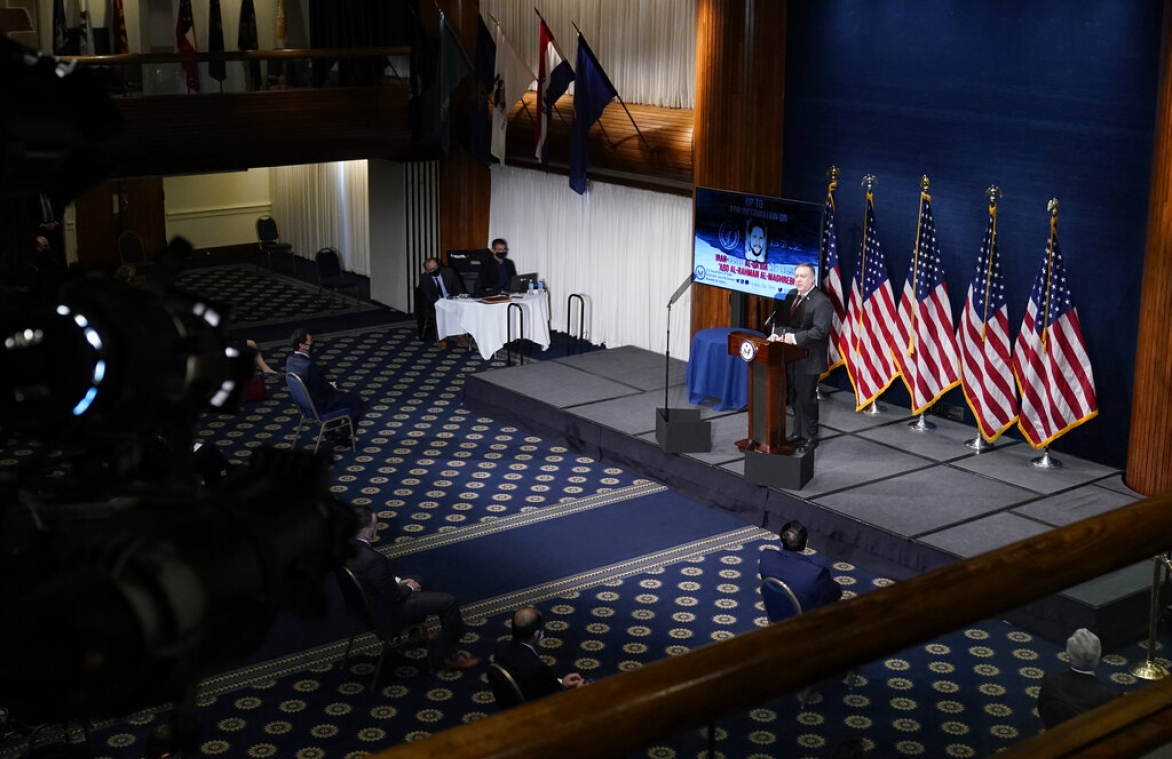 NEW YORK (AP) — The White House reporter for Voice of America was abruptly pulled from her beat after trying to question Secretary of State Mike Pompeo following a speech he gave at the government agency this week.

Pompeo's speech and the demotion of Patsy Widakuswara led to an angry phone meeting between journalists and managers on Jan. 12 that typified some of the tensions at the agency during President Donald Trump's administration.

Founded during World War II and run by the U.S. Agency for Global Media, Voice of America broadcasts news from the United States to countries around the world. The administration has sought to have VOA better reflect its messages, while journalists there have taken pride in their independence.

In his speech on Jan. 11, Pompeo said that "it's not fake news for you to broadcast that this is the greatest nation in the history of the world." He said he backed their role as journalists, but said the agency was not "Vice of America" and that its broadcasts had too often demeaned the country.

After speaking, he engaged in a brief question and answer session with VOA's new director, Robert Reilly.

Apparently unsatisfied with the questions put to Pompeo, Widakuswara shouted her own as he was leaving. "Mr. Secretary, what are you doing to repair the United States' reputation around the world?" she asked, in reference to last week's riot at the U.S. Capitol, according to a tape of the encounter she later tweeted.

When he didn't answer, she asked, "Mr. Secretary, do you regret saying there will be a second Trump administration?"
Pompeo walked away without acknowledging her.

"It is my job," Widakuswara tweeted. She declined comment when reached by The Associated Press.

The Pompeo meeting itself was the subject of controversy among journalists there, particularly during the pandemic, and because they weren't allowed to ask questions, although some were submitted to Reilly in writing.

After Pompeo left, Widakuswara asked Reilly why he didn't ask "any of the questions that we want to know about," according to a recording of the encounter. Reilly asked who Widakuswara was and her job, and told her, "you obviously don't know how to behave."

After she told him she was paid to ask questions, Reilly said that she was "out of order."

Later on Jan. 11, Widakuswara informed the White House Correspondents Association that she was no longer able to go on President Donald Trump's trip to Texas, where she was supposed to be the radio pool reporter.

Through a spokeswoman, the U.S. Agency for Global Media said Jan. 12 that it did not comment on personnel matters.

The Democratic chairman of the House Foreign Affairs Committee, Gregory Meeks, and the lead Republican, Michael McCaul, issued a joint statement saying they were "incredibly frustrated" with Widakuswara's demotion.

"Absent a legitimate reason for this move, which has not been provided, we believe she should be reinstated," the congressmen said. "This is the United States of America — we do not punish our journalists for seeking answers to their questions."

The White House Correspondents Association, in a statement by its president, Zeke Miller, accused the Trump administration of committing an assault on the First Amendment.

Steve Herman, who is Voice of America's White House bureau chief, tweeted his support for his colleague.

"I have worked with Patsy for several years," Herman wrote. "She exemplifies ... excellence and integrity. She has always carried out her duties in adherence to VOA's charter. I am confident most, if not all, of my colleagues share this assessment."

During a morning editorial meeting on Jan. 12, some VOA journalists confronted management about whether Reilly and his boss, Agency for Global Media head Michael Pack, had let Pompeo undermine their independence as reporters, according to a person who listened to the call and spoke under condition of anonymity because the person was not authorized to speak to the press.