The press: Enemies of the people no longer 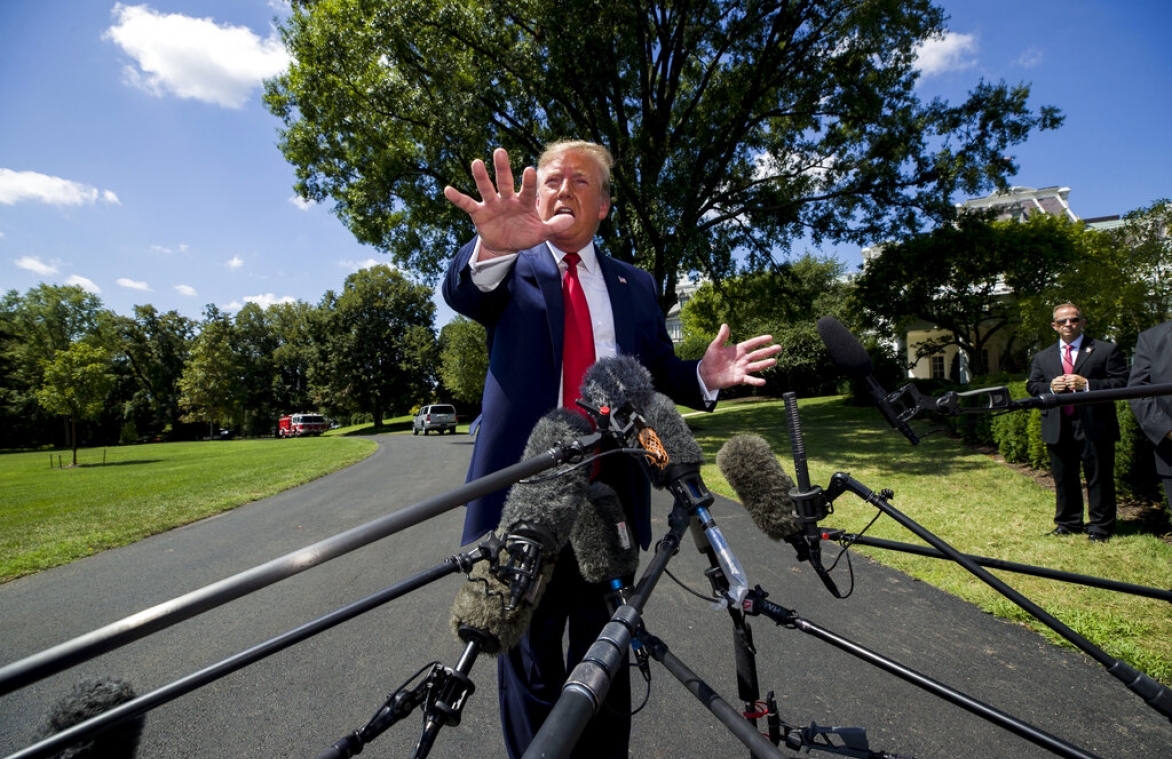 President Donald Trump speaks with reporters before departing on Marine One on the South Lawn of the White House on Aug. 21, 2019, in Washington. (AP Photo/Alex Brandon)

If the insurrection at the U.S. Capitol Building on Jan. 6, 2021, teaches anything, it proves that words have consequences. Words can inspire and heal, but they can also inflame and incite. Despite a well-known adage, there are times when individuals would probably prefer to be assaulted with “sticks and stones” (at least small ones) rather than endure the ignominy of verbal sexual harassment or denigration by powerful political figures.

I do not profess to be either a prophet or the son of a prophet, but for years I have been telling my wife that President Trump was not going to be satisfied until somebody had died.

One of many reasons to question my prophetic credentials is that I was not anticipating the hundreds of thousands who have died from COVID-19 or the violent deaths at the U.S. Capitol Building but was fully expecting (and dreading) the death of American journalists. I have seen too many press conferences where Trump denigrated journalists by telling them that the questions they asked were stupid — something I would never do as an educator. I have witnessed too many rallies in which, parroting the worst communist dictators, he has referred to journalists as “enemies of the people” and falsely claimed that they would refuse to report his remarks, even as they were broadcasting them to the public.

Trump constantly identified his critics as purveyors of “fake news” while constantly advancing palpable falsehoods. Belief in Trump’s ultimate big lie — that he had actually won an election in which he lost both the popular vote and the Electoral College vote as affirmed in state recounts and numerous court decisions — turned out to be the one that ultimately resulted in death and mayhem at the Capitol.

The inaugural appearances of Biden’s new press secretary suggest that we have turned a corner, but it is high time to reflect on where we have been.

What would have happened if, as Trump was pointing out members of CNN and other news sources that he abhorred, the crowd had begun assaulting or killing them? Would he have fiddled as he did during the assault on the U.S. Capitol, or would he have intervened, explaining that he really didn’t mean what he said (take him seriously but not literally)?

I continually hear fellow citizens telling me how unfairly Trump has been treated, and certainly many of the news sources I have consulted have openly challenged and sometimes even mocked him. I would hope that no reputable journalists take pride in calling the president a liar, but when confronted with a virtual firehose of untruths, it must be difficult to know what they should, in fact, be saying. Trump has long substituted name-calling for engaging in debate, even with his political opponents, and when his rhetoric barely rose to the level of a schoolroom brawl, it was difficult to know how to respond to it.

As distressed as I am about the deaths (especially of police officers) during the Capitol melee, I am relieved that it did not take the martyrdom of journalists to demonstrate the perils of Trump’s derogatory and inflammatory rhetoric. It is totally proper to call out members of the press when they get stories wrong; it is not appropriate to denigrate members of this honorable profession just because they are pointing out harsh truths.

The First Amendment protections of freedom of speech and press remain among the glories of American constitutional democracy. Members of the press should never be sycophants, but we can only hope that the new president and members of the press will be able to establish a mutually respectful posture toward one another.

John R. Vile is a professor of political science and dean of the University Honors College at Middle Tennessee State University and one of the original editors of The Encyclopedia of the First Amendment.