Even without listening, U.S. lives in Limbaugh's media world 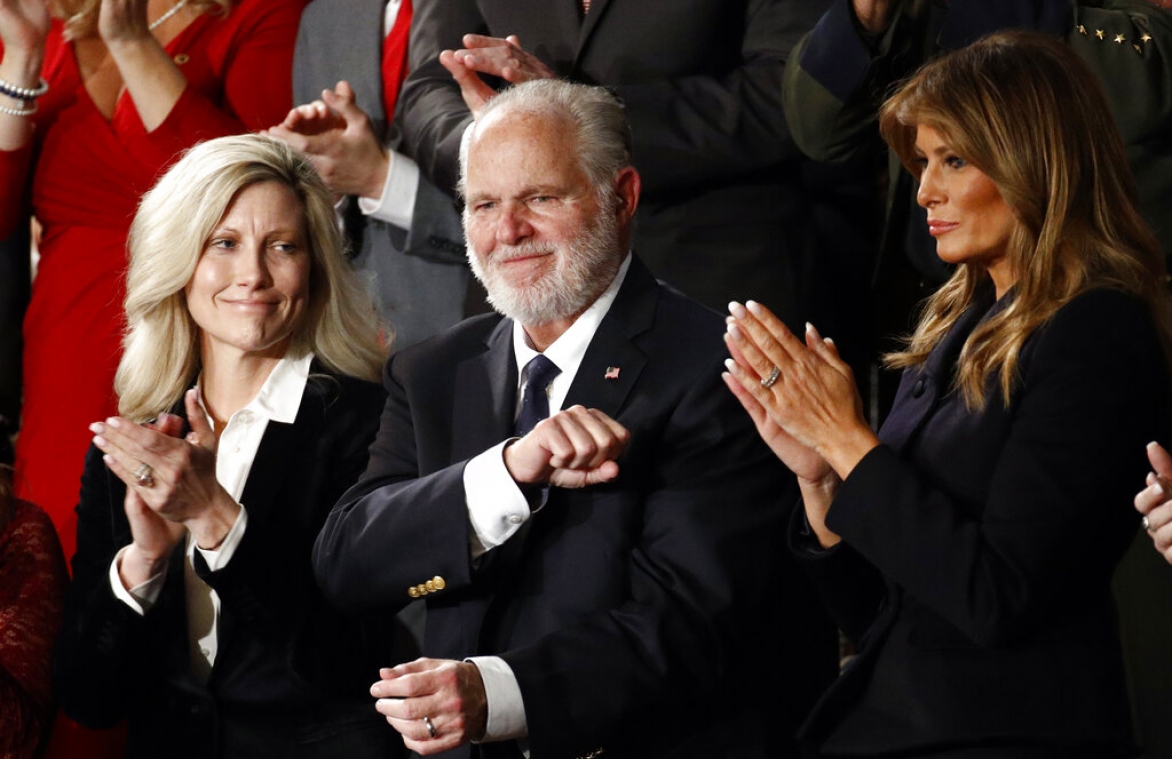 In this Feb. 4, 2020, file photo, Rush Limbaugh reacts as first Lady Melania Trump, and his wife, Kathryn, applaud, as President Donald Trump delivers his State of the Union address to a joint session of Congress on Capitol Hill in Washington, D.C. Limbaugh, the talk-radio host who became the voice of American conservatism, received the Presidential Medal of Freedom that night. (AP Photo/Patrick Semansky)

NEW YORK (AP) — You didn't have to like or even listen to Rush Limbaugh to be affected by what he did.

Conservative talk radio wasn't a genre before him. Without Limbaugh, it's hard to imagine a Fox News Channel, or a President Donald Trump, or a media landscape defined by shouters of all stripes that both reflect and influence a state of political gridlock.

To his fans, Limbaugh's death Feb. 17 of lung cancer at age 70 was an occasion for deep mourning. For his foes, it was good riddance. Somewhere, Rush could surely appreciate it.

He left a legacy.

"He was the most important individual media figure of the last four decades," said Ian Reifowitz, professor of historical studies at the State University of New York and author of The Tribalization of Politics: How Rush Limbaugh's Race-Baiting Rhetoric on the Obama Presidency Paved the Way for Trump.

That assessment was freely offered even though Reifowitz, as the title of his book suggests, isn't a fan. He blames Limbaugh for setting a blueprint for white identity politics and the dividing of the nation into uneasy tribes.

Limbaugh's death led Trump to call in to Fox News Channel for his first television interview since leaving office — and he did it twice.

Former Vice President Mike Pence told Fox he was inspired by Limbaugh to become a talk-radio host himself, which launched his political career. Ex-White House Press Secretary Kayleigh McEnany reminisced about riding as a child in her father's pick-up truck as Limbaugh's show played on the radio.

"I am the definition of a 'Rush baby,' and it's not just me," McEnany said on Twitter. "There are tens of thousands of us all across the conservative movement."

But the idea of conservative talk radio didn't take hold until Limbaugh, after bouncing through DJ jobs in Pittsburgh, Kansas City and Sacramento, went national from a perch at New York's WABC in 1988, said Michael Harrison, publisher of Talkers magazine.

Limbaugh was a sensation among people who liked to tweak liberals, outraging with political incorrectness. Before Limbaugh, only 30 or 40 stations did "talk radio," and many weren't political, Harrison said. Now there are thousands.

To the end, Limbaugh led the field. He reached an estimated 15.5 million people each week and lost in the ratings for three months only once in some three decades, to advice host Laura Schlesinger, Harrison said. Bumper stickers proclaimed, "Rush is Right."

"There is no talk radio as we know it without Rush Limbaugh. It just doesn't exist," said Sean Hannity, who has 15 million radio listeners beyond his Fox News Channel show. "And I'd even make the argument in many ways: there's no Fox News or even some of these other opinionated cable networks."

"I'm trying to attract the largest audience I can and hold it for as long as I can so that I can charge advertisers confiscatory advertising rates," Limbaugh told Steve Kroft of "60 Minutes" in 1991. "This is a business."

But he soon became more than a business leader. Republicans credited Limbaugh for helping them win the House majority in 1994.

"It wasn't just that he transformed the media landscape, but he transformed the Republican Party," said Nicole Hemmer, author of Messengers of the Right: Conservative Media and the Transformation of American Politics. "He became a power player and someone who could move voters."

To SUNY's Reifowitz, Limbaugh led the way in getting people "scared about the browning of the country."

Some of Limbaugh's language was downright ugly. He invented the term "feminazi," called Chelsea Clinton a "dog" when she was 12 years old and had to apologize for calling a young woman a "slut" for arguing that birth control be covered by health insurance. He mocked the death of AIDS victims and played the parody song "Barack the Magic Negro" when Barack Obama was elected president.

The headline on HuffPost's obituary on Feb. 17 said Limbaugh "saturated America's airwaves with cruel bigotries, lies and conspiracy theories." The Root called him a "spouter of racist, hate-filled garbage."

On Foxnews.com, Limbaugh's obituary's headline was "Greatest of All Time."

Limbaugh didn't embrace Trump right away, but soon fell in line. Trump's appeal mystified many in politics at first, but "if you had been listening to Rush Limbaugh for 20 years, he sounded very familiar," Hemmer said.

As Limbaugh's political strength became evident, many Republican politicians felt they couldn't cross him, or run the risk of alienating his millions of listeners, Hemmer said. "Many of these listeners didn't care if Rush Limbaugh crossed the line (of propriety)," she said. "They cared more about loyalty to him than any kind of underlying set of principles."

The economic lessons taught by Limbaugh are clear each night on Fox, CNN and MSNBC, routinely the three most-watched cable networks. They're not really news networks in prime time; they present political talk.

"It's hard," Hemmer said, "to overstate his importance."

Harrison, who interviewed Limbaugh several times over the years, said the talk-show host "began to take himself more seriously" in his later years.

Limbaugh even appeared to measure words more carefully. After receiving social media blowback in December for suggesting that the nation was "trending toward secession," he later made clear he wasn't advocating that.

To the end, however, he remained loyal to Trump, who awarded Limbaugh a Presidential Medal of Freedom at the State of the Union address last year.

Limbaugh supported Trump's claims that the 2020 election was stolen and, on Jan. 7, compared rioters at the Capitol to people who sparked the Revolutionary War.