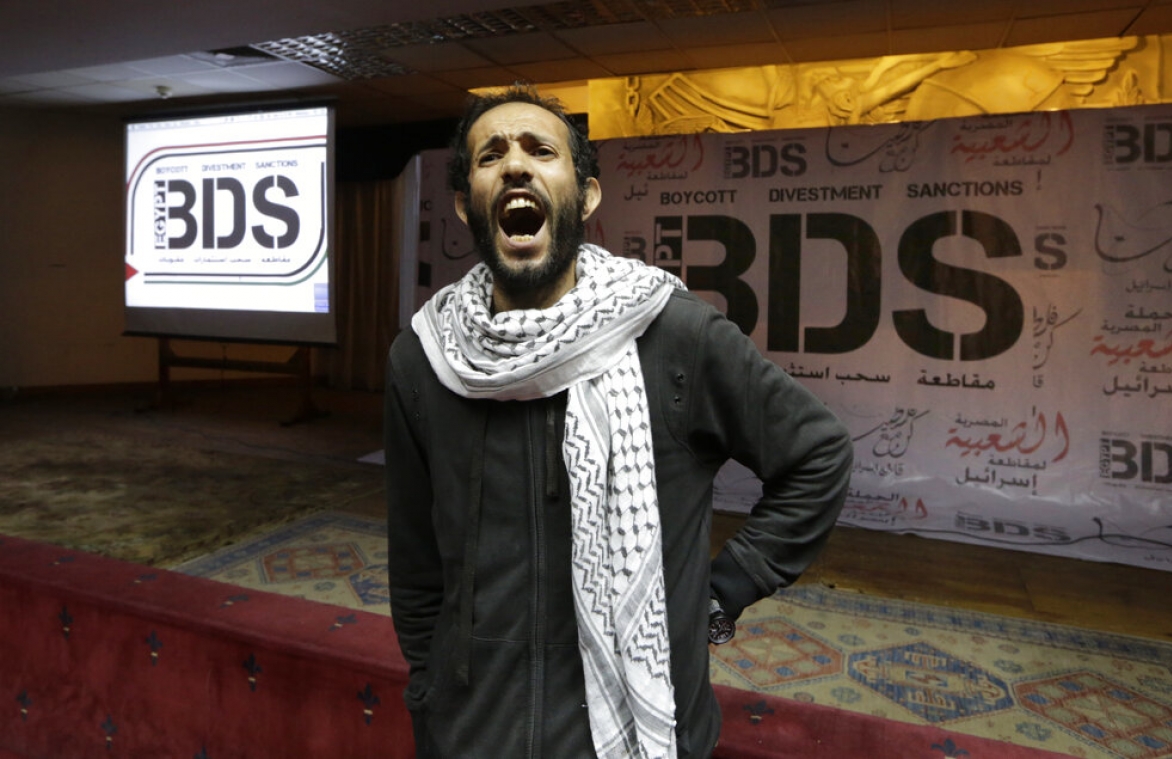 In this Monday, April 20, 2015, file photo, An Egyptian man shouts anti-Israeli slogans in front of banners with the Boycott, Divestment and Sanctions (BDS) logo during the launch of the Egyptian campaign that urges boycott, divestment and sanctions against Israel and Israeli-made goods, at the Egyptian Journalists’ Syndicate in Cairo, Egypt. The presidents of Israel's eight research universities are calling on an American organization to refrain from moving forward with plans to boycott Israeli academics. The initiative is backed by BDS, which aims to protest Israeli policies toward the Palestinians but which Israeli universities accuse of spreading lies and slander about the country. (AP Photo/Amr Nabil)

An Arkansas law that prohibited public entities from contracting with companies that boycott Israel imposes unconstitutional conditions and violates the First Amendment, a divided federal appeals court has ruled.

In 2017, Arkansas enacted a law that provided in part:

(a) Except as provided under subsection (b) of this section, a public entity shall not:

(1) Enter into a contract with a company to acquire or dispose of services, supplies, information technology, or construction unless the contract includes a written certification that the person or company is not currently engaged in, and agrees for the duration of the contract not to engage in, a boycott of Israel; or

(2) Engage in boycotts of Israel.

A federal district court dismissed the lawsuit, ruling that a boycott of Israel was not a form of speech protected by the First Amendment. According to the district court, the law only limited commercial activity or conduct, not speech. On appeal, a three-judge panel of the 8thU.S. Circuit Court of Appeals reversed in Arkansas Times LP v. Waldrip, finding 2-1 that the act imposed conditions on companies that implicated their First Amendment rights.

The 8th Circuit reasoned that the law triggered the First Amendment because it limited what a company may say or do in support of a boycott. “In this way, the Act implicates the First Amendment rights of speech, assembly, association, and petition recognized to be constitutionally protected boycott activity,” the appeals court panel majority wrote.

“Relying on the ordinary meaning of ‘boycott,’ a contractor could readily conclude that it was prohibited from both refusing to economically engage with Israel and supporting or promoting a boycott of Israel or Israeli-goods,” the 8th Circuit said. “A contractor that does not want to risk violating the terms of its contract would likely refrain even from activity that is constitutionally protected.”

The 8th Circuit reasoned that “supporting or promoting boycotts of Israel is constitutionally protected” under the U.S. Supreme Court’s decision in NAACP v. Claiborne Hardware Co. (1982). In that decision, the Court ruled that Charles Evers, the brother of slain civil rights leader Medgar Evers, had a First Amendment right to use intemperate language in urging African-American citizens to boycott businesses that promoted discriminatory policies. The decision meant that the government could not prohibit speech that encouraged people to engage in a boycott.

Judge Jonathan A. Kobes dissented, arguing that the law limited only commercial conduct, not political speech.