The message of the 19th Amendment is simple: Expand the vote 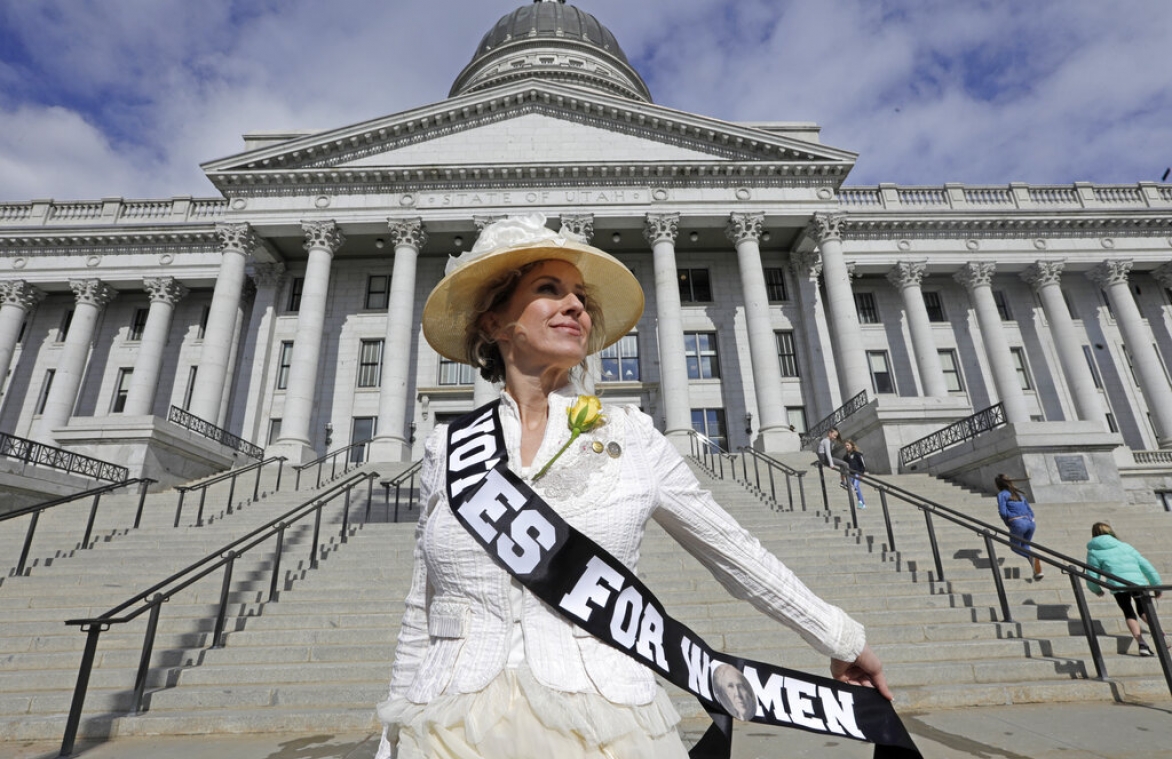 Erin Preston wears period clothing a she stands in front of the Utah State Capitol on Feb. 12, 2020, in Salt Lake City. Utah lawmakers recognized the 150th anniversary of Utah's granting women the right to vote. A Utah woman, Seraph Young, cast the first ballot under a women's suffrage law days after the 1870 law was passed. Utah was also the second state to extend the right to vote to women after Wyoming. (AP Photo/Rick Bowmer)

The end of March brings an end to Women’s History Month 2021. Closing with it are the year-long celebration of woman suffrage, the unprecedented voter turnout of the 2020 election, intense focus on the American right to vote, and the teaching moment of active citizenship as the ultimate expression of American democracy. Their message rings out: Let the people vote. Help people vote. Support them in voting. Expand access to the ballot for every American citizen. Assist Americans toward the full citizenship to which they were born or naturalized. Ensure that voting is broad-based. Make sure it includes every American.

American democracy is on the line. State legislatures, including the Tennessee General Assembly, are proposing and passing legislation that restricts the ability of hardworking citizens to vote through a raft of repressive, targeted, threatening new laws. These laws, constituting “the most sweeping contraction of ballot access in the United States since the end of Reconstruction,” are working their way through at least 43 states’ legislatures intent on proactively reducing their citizens’ access to the ballot, the most sacred expression of Americans’ freedom of speech.[1] Every single American wants an honest, secure vote, but the dog whistle “voter security” is based on fear, not fact, and intentionally misleads. The new cache of restrictive state laws even goes so far as criminalizing the act of bringing food or drink to patient voters stuck in long waiting lines at the polls. Doesn’t it make better sense to provide many more ways to vote so there are shorter lines in the first place?

If you stand unequivocally for First Amendment freedom of speech, you wholeheartedly support voting by every American. If you truly value our Constitution, you do not cull and delimit which Americans can participate. Rather, you help citizens become voters. You educate them. You facilitate access and simplify processes. You create systems of welcome. You open doors to the active civic participation that is the hallmark of American democracy.

Women’s History Month 2020 — March a year ago — March 11 to be exact — changed our world:[2] The WHO declared a global pandemic, the U.S. closed international travel, and universities across the country went into quarantine, as did MTSU. Also, the State of Tennessee House of Representatives Elections and Campaign Finance Subcommittee killed in subcommittee a bill that would have opened polling places on Tennessee public university campuses to offer easy voting access directly to our state’s youngest, least experienced, least practiced voters. Fear is what motivates defensive, repressive action. In the case of the voting-on-campus bill, it was fear of our state’s young people, our future civic leaders.

Ironically, 50 years ago, when the United States Congress passed the 26th Amendment, March 23, 1971, to open voting to 18-year-olds — our nation celebrates another important voting anniversary in 2021 — Tennessee ratified the amendment the same day, March 23, 1971. Tennessee sped to ratify. Tennessee widened the vote to more citizens. Tennessee’s legislature stood on the right side of history, as it did when it ratified the 19th Amendment on Aug. 18, 1920. Tennessee continued a noble tradition.

During 2020, our General Assembly reveled in the centennial celebration of Tennessee having been the “perfect 36” to bring home the 19th Amendment and secure the vote for American women. Yet looking back nostalgically at praiseworthy history is utter irony when the state backs policies that make voting more difficult for Tennesseans.

The For the People Act (H.R. 1/S. 1) and the John Lewis Voting Rights Advancement Act (H.R. 4/S. 4263), having passed the United States House of Representatives, are currently before the U.S. Senate. Together they would protect American voters from constricting state laws and renew voter protections gutted from the 1965 Voting Rights Act by the 2013 Shelby County v. Holder  Supreme Court decision.

Tennessee exalts our distinguished voting rights heritage if our state insists that our U.S. senators vote to pass the legislation to protect Tennesseans’ citizenship, right to vote, and unencumbered access to the ballot. The Tennessee General Assembly, Gov. Bill Lee, and Secretary Hargett would ennoble Tennessee’s place in history if they would advocate in favor of, and if Sens. Blackburn and Hagerty would vote in favor of, the For the People Act and John Lewis Voting Rights Act. They would genuinely, profoundly honor Anne Dallas Dudley, Frankie Pierce, Abby Crawford Milton, Sue Shelton White — the Tennessee women on the state suffrage monument at Centennial Park — and the thousands of Tennessee women who worked for decades to achieve woman suffrage, if our elected leaders would speak and vote for citizens’ voting.

In 1920, Carrie Chapman Catt said that the vote is a prayer, and she called on each of us to act.[3]

Voter suppression is an affront to democracy. Expanding the vote is democracy. The principle is simple. To commemorate historic voting milestones is nice, but to open wide the doors of the ballot booth to every citizen is righteous. It is the right side of history. It is action.