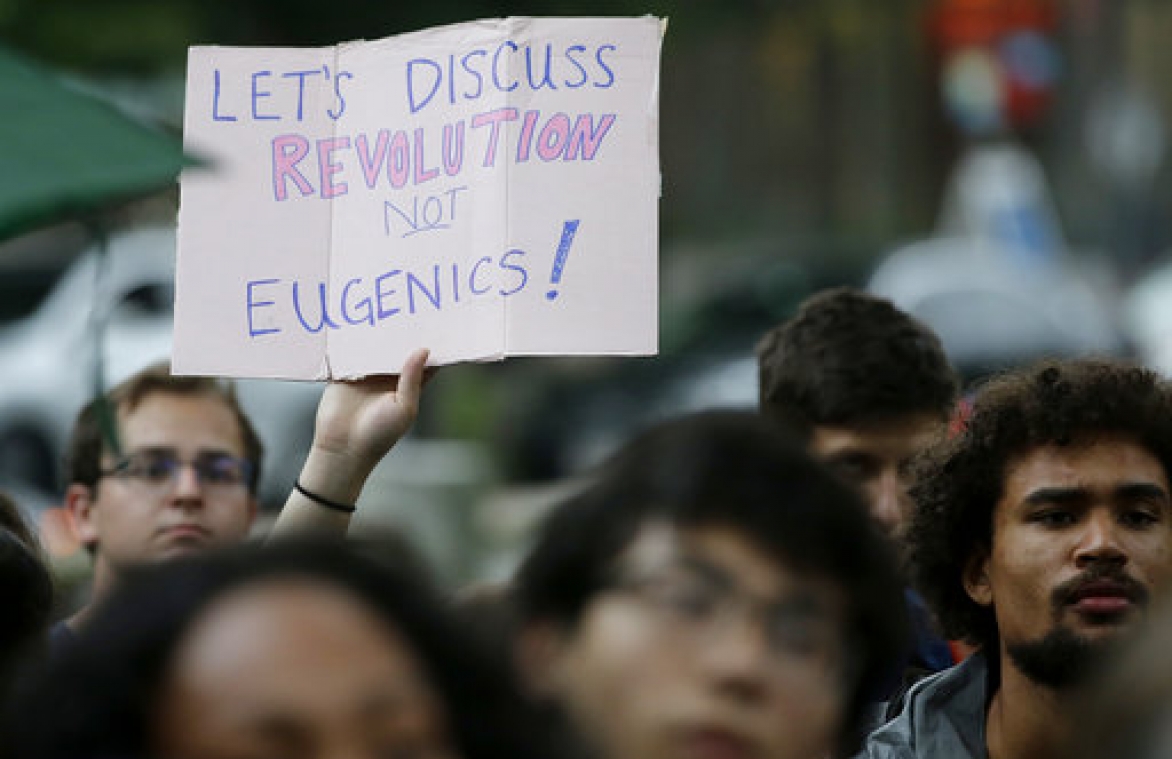 A protester displays a placard while protesting a scheduled speaking appearance of author Charles Murray on the campus of Harvard University, Wednesday, Sept. 6, 2017, in Cambridge, Mass. Murray, who co-wrote a book discussing racial differences in intelligence, touched off a boisterous protest earlier in 2017 at Vermont's Middlebury College. (AP Photo/Steven Senne, Reprinted with permission from The Associated Press)

There’s a certain irony to current controversies surrounding free speech and controversial speakers on college campuses. Those of us who work on campuses would tell you that the only way to ensure student attendance for a guest speaker is answer one of the following two questions in the affirmative: “Is this going to be on the exam?” or “Will I get extra credit if I attend?”

It’s the rare campus speaker that fills a hall, and it’s rarer still to have one inspire a protest. Still, it’s the high-visibility incidents that draw media coverage and drive public perception that colleges suppress free speech, particularly conservative speech.

The Freedom Forum Institute’s First Amendment Center has just released the results of a survey asking whether a public university should be able to retract invitations to controversial speakers when certain conditions exist. The word “public” is critical here because the First Amendment’s guarantee of free speech applies only to public universities.

The survey found that:

It’s a little disquieting that 4 in 10 believe that public universities should be able to cancel a speaker if he or she might offend “individuals.” In these polarized times, it’s difficult to conceive of anyone speaking on any topic without offending someone.

That finding – along with majority support for cancelling speakers if a protest is likely – suggests there is significant public support for keeping controversial ideas off college campuses. That does beg the question: If a public institution dedicated to the sharing of knowledge and ideas is the wrong place for controversial thoughts, what is the appropriate venue?

While it might seem from these responses that public college administrators have quite a minefield to run, the truth is that the First Amendment offers clear guidance on how to address these issues with clarity, consistency and resolve.

Colleges need to establish clear and readily accessible written guidelines about inviting speakers to campus. This would include establishing who has the authority to invite speakers, the venues and times available for events, and the security and clean-up costs associated with speaker events, based on the size of the audience and not the ideas being shared.

These guidelines have to be applied consistently. If the campus host meets all of these requirements, the speaker must be allowed to present. There can’t be additional hurdles or fees because certain ideas are more volatile than others.

It’s also essential that the university respects the process, and not have second thoughts when members of the state legislature or alumni share their outrage.

The one wild card here is when a speaker is so polarizing that there is a strong likelihood of violence and a threat to public safety. Under those very rare circumstances, a university has no choice but to postpone the event. That delay though, should be accompanied by a public declaration that the speaker will be invited back at a future time and in a more secure location.

While the burden of ensuring free speech on campus belongs to the university, let’s not let those who invite speakers off the hook entirely. These controversies tend to emanate from the same three or four nationally known and polarizing speakers. If you’re sincerely interested in bringing a fresh and thoughtful viewpoint to the campus, why are you booking the circus?

For their part, America’s universities – public and private- would do well to ensure that students are exposed to a wide range of viewpoints and speakers, enhancing the curriculum with multiple perspectives. It also wouldn’t hurt to offer a little extra credit.

Ken Paulson is president of the Freedom Forum Institute’s First Amendment Center and dean of the College of Media and Entertainment at Middle Tennessee State University.