PA Court: Threats don't get First Amendment protection just because they are set to rap music 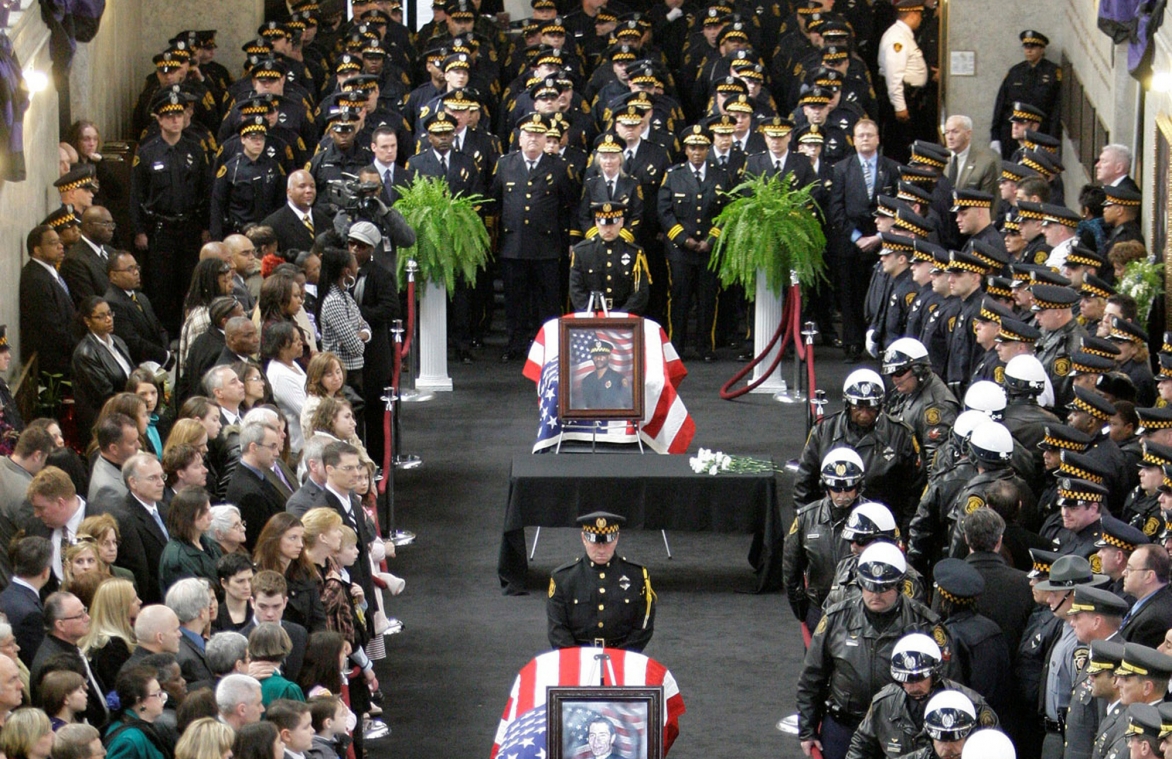 In this April 8, 2009 file photo family and officials pay their respects to the three Pittsburgh Police officers who were shot and killed while responding to a 911 call in Pittsburgh. The Pennsylvania state Supreme Court recently ruled on an appeal by Jamal Knox, who argued his song, which made threats against police and mentioned Richard Poplawski, who's on death row for the shooting deaths of the three Pittsburgh police officers in 2009, is protected by the right to free speech. The song taunted two officers involved in Knox's arrest. The court ruled the song was a true threat and not protected by the First Amendment. (AP Photo/Gene J. Puskar, File, with permission from The Associated Press)

A Pittsburgh-based rapper named Mayhem Mel did not have a First Amendment right to create a video that threatened or intimidated the officers scheduled to testify against him on drug charges, the Pennsylvania Supreme Court recently ruled.

The decision is an important one for both the true-threat doctrine and rap music.

In April 2012, the police pulled over a vehicle driven by Mayhem Mel, whose real name is Jamal Knox.

As a result of the stop, officers charged Knox with illegal drug offenses.  The officers were scheduled to testify against Knox in his criminal trial.

While the charges were pending, Knox and another man created a rap song entitled “F--- the Police” that mentioned his arresting officers by name. The chorus of the song reads:

Other verses identify the officers by name.  Another officer discovered the rap video.  As a result, Knox and another man were charged with the making of terroristic threats and witness intimidation. Knox contended that he did not intend any threats and that his speech was artistic expression protected by the First Amendment.

A trial court judge rejected the First Amendment arguments and deemed Knox guilty.  On appeal, the Superior Court of Pennsylvania affirmed his conviction.

On further appeal, Knox pressed his First Amendment argument and contended that his rap video was not a true threat, a category of expression that receives no free-expression protection.   Knox advanced the free-expression argument.  He contended his music has artistic value and that he never intended to threaten officers.

On August 21, 2018, the Pennsylvania Supreme Court affirmed his conviction in Commonwealth v. Knox.  The state high court acknowledged that the First Amendment protects a broad range of artistic expression but wrote that there are limits, including true threats.  According to the Pennsylvania high court, expression rises to the level of a true threat only if the defendant specifically intended to utter threats.  However, in a footnote the court noted that it remains “an open question” exactly what level of specific intent is required for a true threat.

Court focuses on specificity of rap lyrics, including officers' names

Turning to Knox’s rap lyrics, the court focused on language in the song that suggested violence toward the officers.  The court wrote that the song included unambiguous threatening language, such as “Let's kill these cops cuz they don't do us no good" and "that whole department can get it." The lyrics also mention two specific police officers by name.

“Finally, the lyrics suggest a knowledge of the identity of the officers' confidential informants and a plan to murder at least one such informant with a Glock,” the court wrote.

Several amici had urged the court to recognize that rap music often contains violent imagery and lyrics but that that amounts to protected artistic expression and fantasy as opposed to actual threats.

The court seemingly acknowledged this, writing that many rap artists adopt stage personas quite different from their actual persons.  However, according to the court, in this case Jamal Knox’s song was of a “different nature and quality.”

Court: Threats don’t get First Amendment protection just because they are in musical style

“More generally, if this Court were to rule that [Knox’s] decision to use a stage persona and couch his threatening speech as ‘gangsta rap’ categorically prevented the song from being construed as an expression of a genuine intent to inflict harm, we would in effect be interpreting the Constitution to provide blanket protection for threats, however severe, so long as they are expressed within that musical style,” the court wrote.

A separate partial concurring and partial dissenting opinion agreed that Knox’s conviction should be affirmed because he uttered a true threat.  However, this opinion disagreed with the test used to determine whether speech rose to the level of a true threat.  Under this test, a court would conduct an objective analysis to determine whether a reasonable recipient would regard the statement or expression as threatening.  If so, the court would then “conduct a subjective analysis to ascertain whether the speaker specifically intended to intimidate the victim or victims, or intended his expression to be received as a threat to the victim or victims.”

The decision is an important one for at least a couple reasons.   First, it adds to the division in the courts over when exactly speech crosses the line from protected speech to an unprotected true threat.  Second, the decision shows that rap music continues to be the source of controversy.

David L. Hudson, Jr. is a Visiting Associate Professor of Legal Practice at Belmont University Law School.  He also is the author or co-author of several First Amendment books, including The First Amendment: Freedom of Speech (2012).