Perspective
June 1, 2021 by The Associated Press 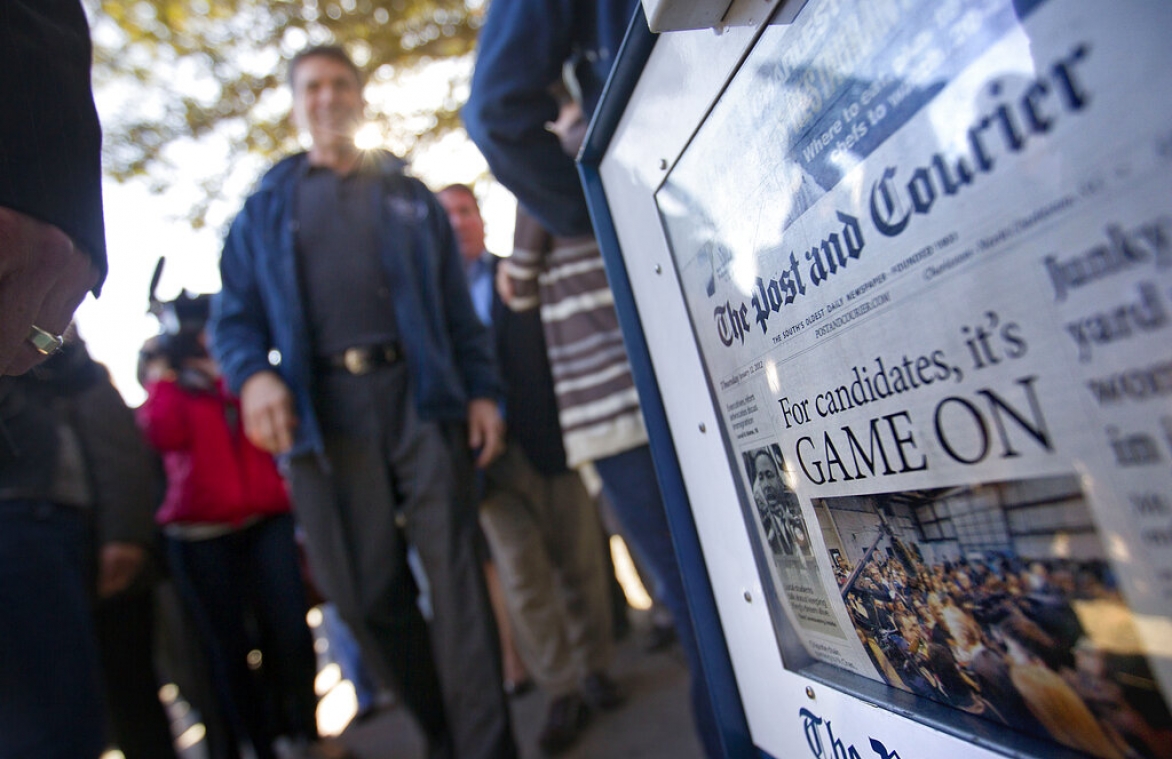 A headline on a local newspaper is seen as Republican presidential candidate, Texas Gov. Rick Perry, rear, walks by as during a campaign visit, Jan. 12, 2012, in Summerville, S.C. (AP Photo/David Goldman)

(The Conversation is an independent and nonprofit source of news, analysis and commentary from academic experts.)

If you're confused about opinion journalism and what it is, you're not alone. Many Americans are. But even so, the editorials, opinion columns and letters to the editor that fill the op-ed pages could help bridge political divides in the U.S. and offer some help to struggling local news outlets.

Two-thirds of Americans polled by Gallup in 2017 said that the news media do not distinguish between fact and opinion, an increase from 42% in 1984. Only 43% of people in another poll said that they can easily tell the difference between news and opinion online. Half of Americans are unfamiliar with the stock opinion journalism term "op-ed," which is shorthand for an opinion-editorial column.

As the lines between opinion and news blur in many Americans' minds, trust in media is falling. Local news sources – daily newspapers and local television news programs – are seen as more trusted, caring and unbiased than national news sources, but even that trust is fraying.

Like nearly everything else in American politics, trust in the news media is polarized along party lines: Democrats trust the media far more than Republicans do, and the most ideological members of each party have the most different ideas about media's trustworthiness.

Given this confusion and disagreement, it might seem unlikely that opinion journalism could be a positive influence. But our research shows that it can.

We are scholars who study politics and the media. We have found that local newspapers – and local opinion journalism in particular – can bridge political divisions and attract more readers.

Opinion journalism is not news reporting; it is distinguished by its stated point of view. It has three basic formats: editorials; opinion columns, or "op-eds"; and letters to the editor.

Editorials are written in the newspaper's voice by the editorial board, often composed of editors, owners and community members. Op-eds are typically written by professional columnists or community leaders. Letters are written by regular readers.

Op-eds ensure that perspectives from nonjournalists appear in the newspaper, help the general public interpret major events and can change readers' minds on the issues. The best op-ed pages operate almost like a town square, allowing readers to discuss and debate issues important both to their communities and beyond.

But the economic crisis in local news is making it harder for the opinion page to realize its potential as a vibrant community forum. Falling revenues and diminished numbers of staff have forced local newspapers to use more syndicated columnists from outside of the paper's community and whose work usually has a national focus. Some papers have cut the position of opinion editor completely.

Without a dedicated staffer to seek out community writers and edit their work, newspapers' reliance on syndicated columns means more opinion columns focused on "right versus left" ideological conflicts between the two national political extremes, not local issues.

Our book shows how doing the opposite – getting rid of national politics on the opinion page and reinvesting in local opinion content – can help newspapers attract readers and cool tensions in their community.

The Desert Sun of Palm Springs, Calif., tried this for the month of July 2019: no syndicated columns, no cartoons about national politics, no letters about then-President Donald Trump.

We measured the ways this experiment changed the material that was published and the attitudes of the people in the community.
It was a major shift. In June, the month prior to this change, half of The Desert Sun's op-ed page was nationally syndicated columns, and one-third of all columns referenced Trump. In July, national syndication disappeared, as did all stories mentioning the president. California topics were the focus of less than half of all columns in June, but 96% focused on California in July. Mentions of the Democratic and Republican parties dropped by more than half, from 25% of all columns to 10%.

Local issues filled the page: Issues like artistic and cultural preservation, traffic and downtown development, and education and the environment got much more attention. The unique character of Palm Springs shone through, once given a chance.

We surveyed readers before and after The Desert Sun's experiment, in Palm Springs and a different city, Ventura, whose local newspaper, the Ventura County Sun, didn't change its opinion page. We wanted to see if the change in opinion journalism shifted how people think and feel about their political opponents.

Political polarization, which is when people feel far apart from the opposing party, slowed significantly in Palm Springs compared to Ventura among certain groups:

These groups are the people most likely to share their views and inform others, potentially spreading the newspaper's influence into the broader community. Even if only a fraction of the community reads the newspaper regularly – The Desert Sun's total circulation is just over 26,000 – a change like this could have larger spillover effects.

The Desert Sun's readers enjoyed the change: Online readership of opinion pieces nearly doubled in July, and in reader surveys we fielded after the experiment, almost five times as many readers said they approved as said they disapproved of the experiment. The experiment helped the newspaper recruit more opinion writers, who then continued to write in the months that followed.

Supporters of local news could follow the lessons of this research by raising money to pay for opinion editor positions and funding creative thinking like The Desert Sun's experiment.

The alternative is that opinion pages will wither and cease to reflect their communities. A local-only opinion page won't restore the economic model that supported newspapers in decades past, but our research shows it can bring back some readers and bridge some of the political divides that can drive American communities apart.

By keeping the focus local, the opinion page could play a small part in restoring trust and helping local newspapers survive these trying times.

This article is republished from The Conversation under a Creative Commons license.