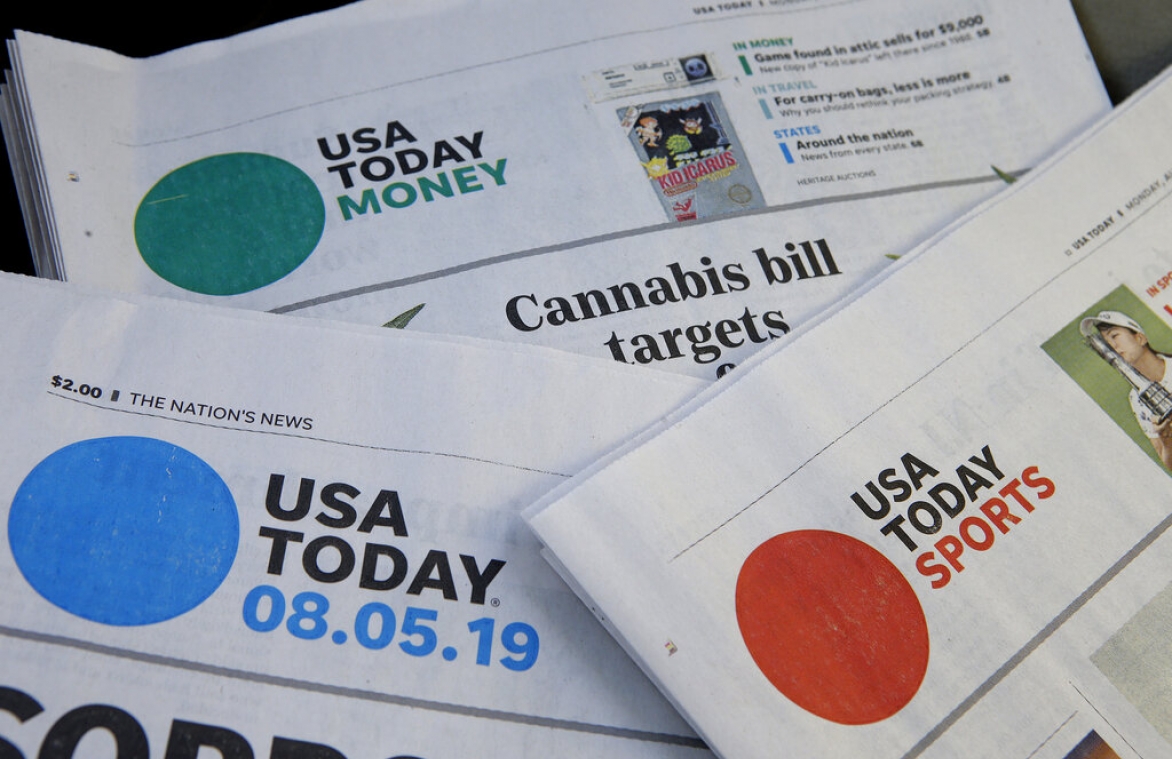 In this 2019 file photo, sections of a USA Today newspaper. The FBI issued a subpoena demanding U.S. newspaper giant Gannett provide agents with information to track down readers of a USA Today story about a suspect in a child-pornography case who fatally shot two FBI agents in February. (AP Photo/Steven Senne)

WASHINGTON (AP) — The FBI issued a subpoena demanding U.S. newspaper giant Gannett provide agents with information to track down readers of a USA Today story about a suspect in a child-pornography case who fatally shot two FBI agents in February.

The subpoena, served on the company in April, came to light this week after the media company filed documents in federal court asking a judge to quash the subpoena. The Justice Department's actions were immediately condemned by press-freedom advocates.

The news comes as the Justice Department has disclosed in recent weeks that it seized the email and phone records of reporters in at least three separate instances during the Trump administration. It raises questions about what liberties federal authorities are taking in using news organizations, journalists and their work as investigative tools.

The subpoena asks for information about anyone who clicked on the article for a period of about 35 minutes on the day after the shooting. It seeks the IP addresses — which can sometimes be used to identify the location of a computer, the company or organization it belongs to, and where it was registered — along with mobile phone identification information of the readers.

While the subpoena doesn't ask specifically for the names of those who read the story, such identification information could easily lead federal agents to the readers.

It is unclear why the FBI was seeking information about the USA Today story in particular, even though numerous others news organizations, including The Associated Press, had reported extensively on the Florida shooting, one of the bloodiest days in the FBI's history.

The suspect opened fire on the agents when they arrived to serve a federal search warrant in a child-exploitation case. The two agents, Daniel Alfin and Laura Schwartzenberger, were killed and three others were wounded.

Maribel Perez Wadsworth, publisher of USA Today and president of the USA Today Network, said the government wants the news organization to hand over "private information" about its readers and said it was fighting the subpoena to protect the relationship between its readers and journalists. The company also contacted the FBI before asking a judge to quash the subpoena but did not receive "any substantive reply nor any meaningful explanation of the asserted basis for the subpoena," she said.

"We intend to fight the subpoena's demand for identifying information about individuals who viewed the USA Today news report," Wadsworth said in a statement. "Being forced to tell the government who reads what on our websites is a clear violation of the First Amendment."

The FBI agent who signed the subpoena to Gannett has worked for years on child-exploitation cases and has testified in several criminal cases related to child-pornography offenses, newspaper accounts and other public records show.

The subpoena — first reported by Politico — says the information is needed as part of an ongoing criminal investigation. Federal officials would not provide additional details about the investigation.

"This is an extraordinary demand that goes to the very heart of the First Amendment. For good reason, the courts have generally refused to give the government access to this kind of sensitive information except in the most unusual circumstances," said Jameel Jaffer, executive director of the Knight First Amendment Institute at Columbia University.

The Justice Department in recent weeks disclosed that investigators secretly obtained call records of journalists at The Washington Post, The New York Times and CNN in an effort to identify sources who provided national-security information published in the early months of the Trump administration. President Joe Biden has said the Justice Department would not seize reporters' phone records, though it remains unclear if that promise can be kept.

"This subpoena, especially when viewed alongside the subpoenas that the Justice Department served under the Trump administration in an effort to obtain journalists' records, strongly suggests we need more robust protection for records that implicate the freedoms of speech and the press," Jaffer said.

The Justice Department — in both Republican and Democratic administrations — has struggled to balance the news media's constitutionally protected rights against the government's interests in safeguarding classified information and collecting information for criminal cases.

During a 2007 investigation, an FBI agent impersonated an Associated Press journalist while investigating bomb threats at a high school in Washington state. The agent portrayed himself as an AP journalist when he communicated with the suspect online and then sent a link to a fabricated AP news article that, when clicked, allowed the FBI to pinpoint the suspect's location.

The ruse was made public in 2014 and two years later the FBI imposed restrictions on the ability of agents to masquerade as reporters — but it stopped short of ruling out the practice.

In 2013, federal investigators secretly seized two months of phone records for Associated Press reporters and editors that included 20 telephone lines of both AP offices and the journalists, including their home phones and cellphones.

After that, the Justice Department, under then-Attorney General Eric Holder, announced revised guidelines for leak investigations, which require additional levels of review before a journalist could be subpoenaed.