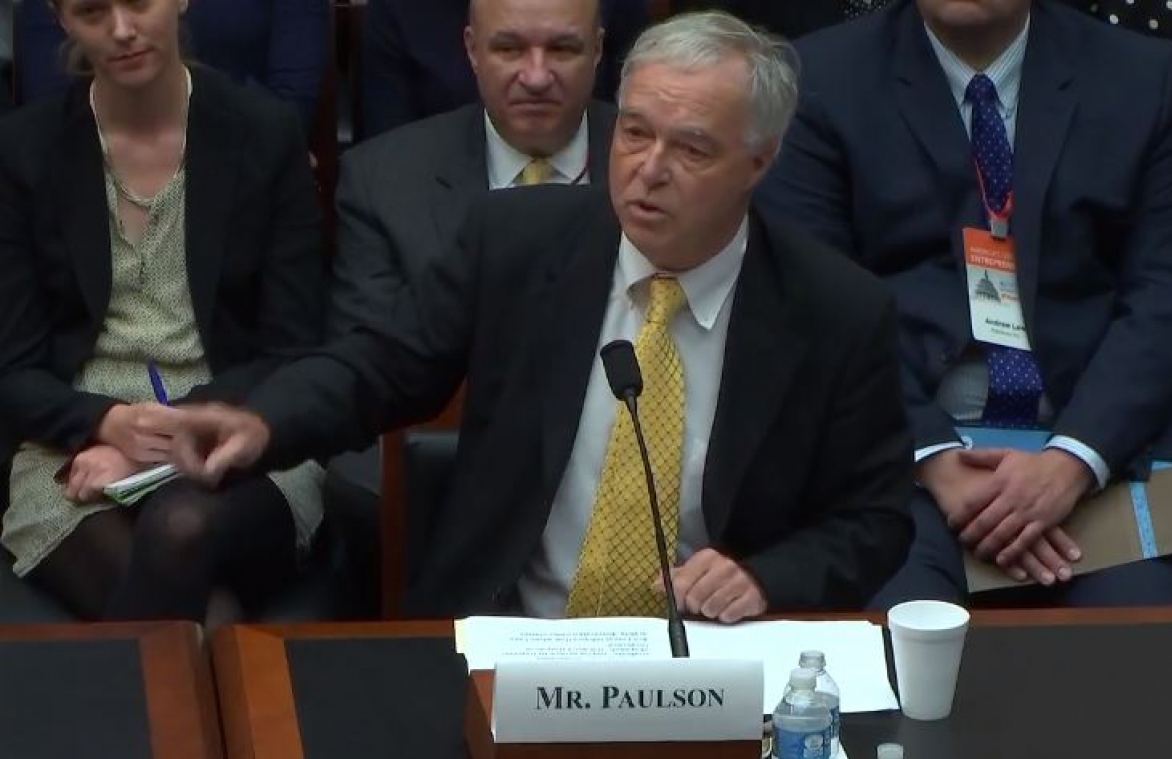 Ken Paulson, dean of the College of Media and Entertainment at Middle Tennessee State University, testifies before the U.S. House Committee on Education and the Workforce hearing on "Examining First Amendment Rights on Campus."

Testimony before the U.S. House Committee on Education and the Workforce

I’m Ken Paulson, dean of the College of Media and Entertainment at Middle Tennessee State University, president of the First Amendment Center at the Newseum Institute and the former editor-in-chief of USA Today, where I remain a columnist writing about free speech and media issues.

My move into academia was a late career-decision. My years in American journalism were gratifying and this felt like the chance to give back. Being on a campus over the past 5 years has been both rewarding and eye-opening.

I’ll have to admit that I initially looked at our students as a generation similar to my own. Externally we certainly were. Dirty blue jeans worn daily, a struggle to stay alert during early morning classes and every possible combination of hair style and facial hair.

But I quickly discovered that this is an entirely new generation. They’re the Google generation, young people for whom answers have always been milliseconds away. They’re amazing multi-taskers, but there’s a drawback to the “Google it” culture. If you can always access information, you don’t have to memorize it or even think deeply about it. That’s particularly the case with America’s most fundamental freedoms.

To be clear, I deeply admire watchdog organizations like the Foundation of Individual Rights in Education, who through a combination of watchfulness, litigation and publicity, shine a light on college campuses where administrators – sometimes students - pay lip service to freedom of speech. The work they do is invaluable.

But I must tell you that when I see widely-distributed news stories about students shouting down speakers or college administrations engaging in heavy-handed tactics, I don’t see my own campus. 70 percent of the students at Middle Tennessee State University are the first in their families to attend college. Their concerns are paying for school, staying in school and making good enough grades to get a job when they leave.

It's about education, not legislation

That’s a dynamic you’ll find at universities all over America. As part of my First Amendment work, I’ve traveled on average to about a dozen campuses a year for the past 20 years. I honestly don’t believe there’s an epidemic of suppression or intolerance in the nation’s universities.  I just see some high-profile instances where college administrators and students are willing to bend free speech principles to prevent hurt feelings or ideological conflict.

Somewhere over the past two decades, the land of the free has become the home of the easily offended.

There are some who see free speech infractions and ask for Congress to do something. But with all due respect, this is not about legislation. It’s about education.

You can’t shout down a speaker if you truly understand how diversity of opinions have bolstered our democracy. You can’t censor students or their media if you understand what Thomas Jefferson, James Madison and the first generation of Americans meant by freedom of the press. You can’t try to zone protests off your campus if you appreciate the value of petition and assembly.

In 2007, as editor of USA Today I convened a group of educators, First Amendment experts, librarians, artists and journalists to found 1 for All, a name derived from the First Amendment’s role in enriching the lives of all Americans. Amendment 1 for All.  It’s a national educational effort with the most basic mission: to build understanding and support for the freedoms  speech, press, religion, assembly and petition. At a time of deep political polarization, we choose not to take sides. In fact, a shared commitment to freedom of press, faith and speech should actually unify this nation.

We build awareness through campus events, social media outreach, educational materials and scholarship competitions, like Free to Tweet, in which students across the country tweet about the importance of the First Amendment.

And yet over 11 years, we’ve barely moved the needle.

When I teach constitutional law to young people, I explain the Constitution supplanting the Articles of Confederation as the re-booting of America – a similar operating system with major upgrades, including a Bill of Rights. But our nation now needs to dig out that manual.

Having the right to say whatever we want does us no good if no one is willing to listen. The most American of values are in the First Amendment. It’s not a coincidence that the strongest, most dynamic, most vibrant and ambitious of nations is also the most free.

All of us who influence students’ lives from kindergarten through college have two overriding obligations.  If we do our jobs the right way, our students will go on to rewarding careers and lives.  But even more important than turning out great professionals is our obligation to graduate great citizens who understand what this nation is all about. America is depending upon it.