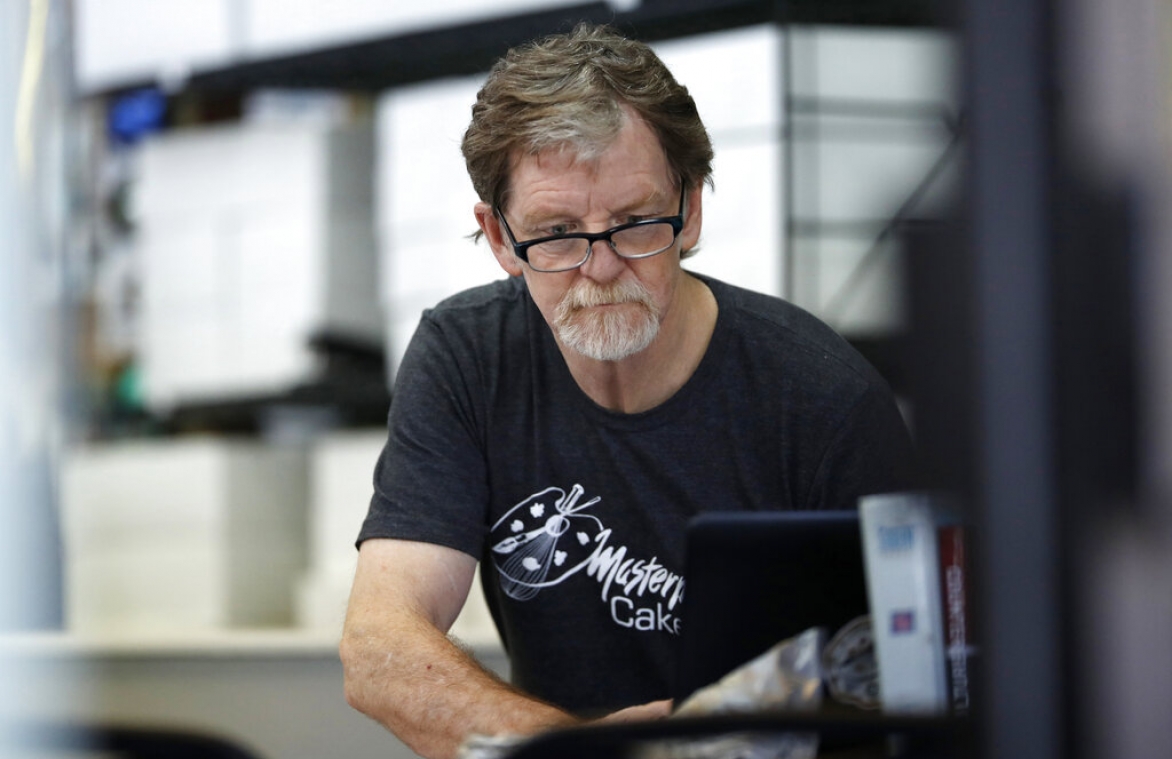 In this June 4, 2018, file photo, baker Jack Phillips, owner of Masterpiece Cakeshop, manages his shop in Lakewood, Colo. Phillips, the baker who won a partial victory at the U.S. Supreme Court in 2018 for refusing to make a wedding cake for a same-sex couple, violated the state's anti-discrimination law by refusing to make a birthday cake for a transgender woman, Denver District Judge A. Bruce Jones ruled June 15, 2021. The group representing Phillips, Alliance Defending Freedom, said June 16 that it would appeal the ruling, which ordered him to pay a $500 fine. (AP Photo/David Zalubowski, File)

DENVER (AP) — A Colorado baker who won a partial victory at the U.S. Supreme Court in 2018 for refusing to make a wedding cake for a same-sex couple violated the state's anti-discrimination law by refusing to make a birthday cake for a transgender woman, a state judge has ruled.
In the June 15 ruling, Denver District Judge A. Bruce Jones said Autumn Scardina was denied a cake that was blue on the outside and pink on the inside to celebrate her gender transition on her birthday because of her transgender status in violation of the law. While Jack Phillips said he could not make the cake because of its message, Jones said the case was about a refusal to sell a product, not compelled speech.

He pointed out that Phillips testified during a trial in March that he did not think someone could change his gender and he would not celebrate "somebody who thinks that they can."

"The anti-discrimination laws are intended to ensure that members of our society who have historically been treated unfairly, who have been deprived of even the every-day [sic] right to access businesses to buy products, are no longer treated as 'others,' " Jones wrote.

The group representing Phillips, Alliance Defending Freedom, said Wednesday that it would appeal the ruling, which ordered him to pay a $500 fine. The maximum fine for each violation of Colorado's Anti-Discrimination Act is $500. But it was not clear from the ruling if the fine was for the two attempts that Scardina made to order the cake or just one.

"Radical activists and government officials are targeting artists like Jack because they won't promote messages on marriage and sexuality that violate their core convictions," the group's general counsel, Kristen Waggoner, said in a statement.

Scardina, an attorney, attempted to order the cake on the same day in 2017 that the U.S. Supreme Court announced it would hear Phillips' appeal in the wedding-cake case. Scardina said she wanted to "challenge the veracity" of Phillips statements that he would serve LGBT customers, but her attempt to get a cake was not a "setup" intended to file a lawsuit, Jones said.

One of Scardina's attorneys, John McHugh, said the case is about how LGBT people are treated, not just what happened to her.

"This is about a business that is open to the public that simply says to an entire class of people in the community that your identity, who you are, is something that is objectional [sic]," he said.