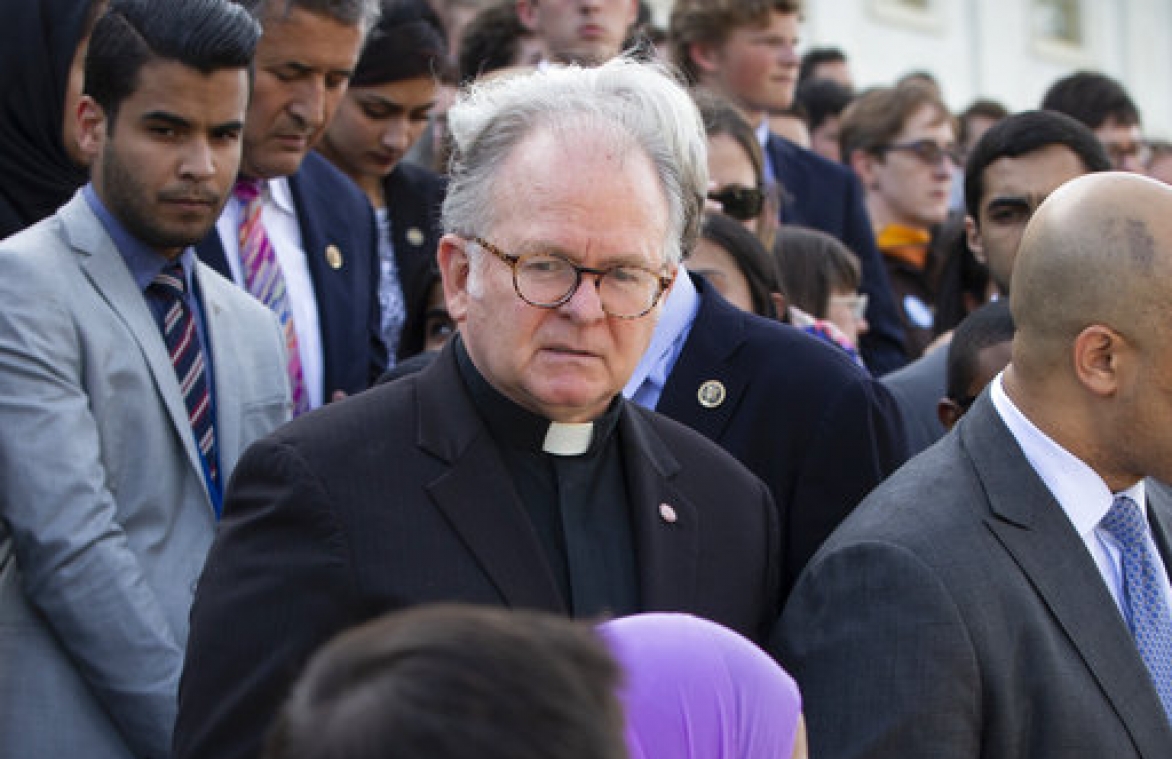 House Chaplain Patrick Conroy declined to allow an atheist, Daniel Barker, deliver a secular prayer as guest chaplain before the U.S. House of Representatives. Barker then sued, saying the decision violated the establishment clause of the First Amendment that limits the government from favoring a religion. A D.C. Circuit Court rejected Barker's claim, saying that U.S. Supreme Court precedent has allowed that legislative prayer can be religious and still be consistent with the Establishment Clause. (In this June 2016 photo, the Rev. Patrick Conroy delivers an interfaith message on the steps of the Capitol in Washington for the victims of the mass shooting at an LGBT nightclub in Orlando, AP Photo/J. Scott Applewhite, used with permission from The Associated Press.)

The Chaplain for the U.S. House of Representatives did not violate the Establishment Clause when he barred an atheist from serving as guest chaplain, a three-judge panel of the U.S. Court of Appeals for the D.C. Circuit has ruled.

Since its founding in 1789, the U.S. House of Representatives has had chaplain-led prayer.  The House rules provide that “[t]he Chaplain shall offer a prayer at the commencement of each day’s sitting of the House.”

Daniel Barker, co-president of the Wisconsin-based Freedom From Religion Foundation, sought to deliver a secular prayer as guest chaplain before the U.S. House of Representatives.  Barker had been ordained to the Christian ministry in the 1970s but later “lost faith in faith” and became an atheist.

Barker met the first two requirements. His congressional representative, Congressman Mark Pocan sponsored him. Furthermore, he was ordained in the 1970s. Barker also contended that he met the third requirement because he would address “the higher power” of human wisdom.

The Chaplain’s Office denied his request, noting that Barker “was ordained in a denomination in which he no longer practices.”

Barker sued the House Chaplain Patrick Conroy and others, including then House Speaker Paul Ryan, for violating the Establishment Clause.  Barker contended that Conroy impermissibly discriminated against him because he was an atheist.

A federal district court dismissed the lawsuit, finding that Barker did not have standing – or a sufficient stake in the litigation – to proceed.

On appeal, a three-judge panel of the D.C. Circuit found that Barker had legal standing to file the lawsuit but ruled against him in its April 19, 2019, ruling in Barker v. Conroy.

“Together Marsh and Town of Greece establish a two-step process for assessing the constitutionality of a particular legislative-prayer practice: identify the essential characteristics of the practice and then determine whether that practice falls within the tradition the Supreme Court has recognized as consistent with the Establishment Clause,” wrote Judge David S. Tatel for the panel.

David L. Hudson Jr., an associate professor of Legal Practice at Belmont University College of Law, is a First Amendment attorney and author who has written, co-written or co-edited more than 40 books, including Let the Students Speak: A History of the Fight for Free Expression in American Schools (Beacon Press, 2011), The First Amendment: Freedom of Speech (Thomson Reuters, 2012) and Documents Decoded: Freedom of Speech (ABC-CLIO, 2017).