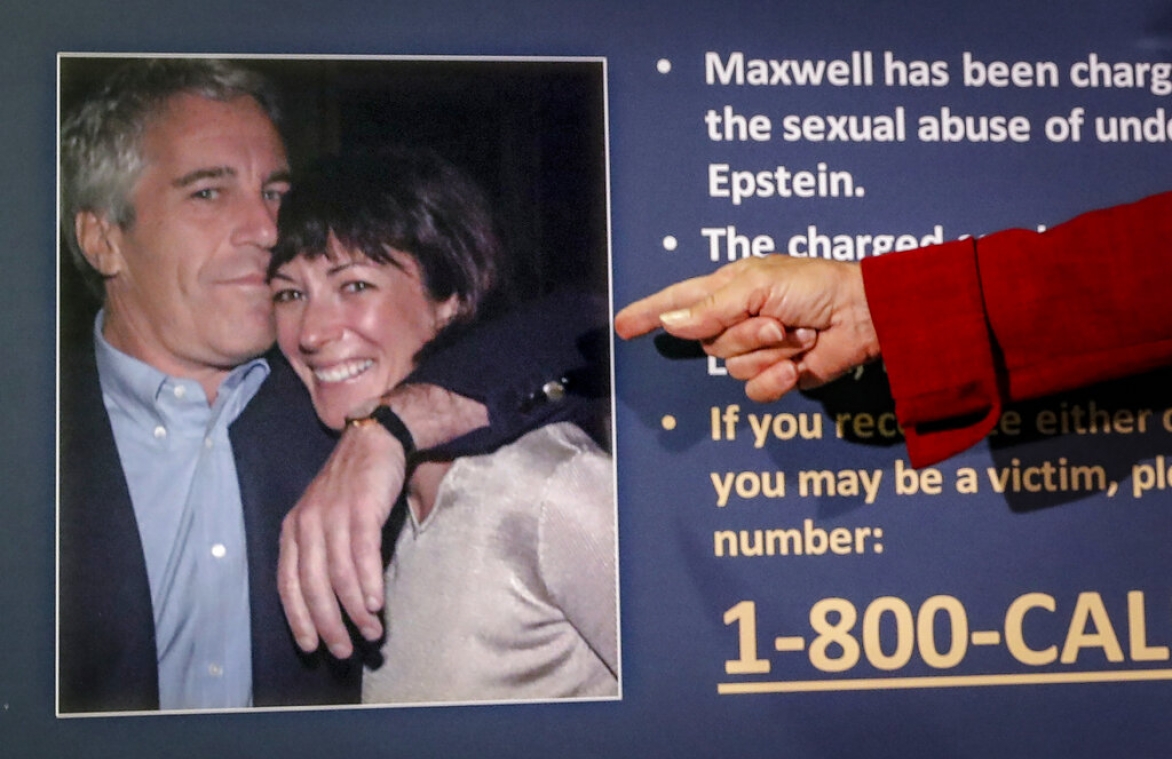 In this July 2, 2020, file photo, Audrey Strauss, acting U.S. attorney for the Southern District of New York, points to a photo of Jeffrey Epstein and Ghislaine Maxwell, during a news conference in New York. AP Photo/John Minchillo

U.S. District Judge Alison J. Nathan said the press and public will be allowed to view the selection proceedings next month via video feeds to an overflow courtroom and a courthouse press room. She said two pool reporters will be let into the courtroom as she questions prospective jurors.

In deciding on the issue, Nathan said she strove to balance the public's right to have access to court proceedings with health measures, such as adding extra space between parties, that have been put in place because of the coronavirus pandemic.

The Reporters Committee for Freedom of the Press, a journalist consortium, and more than a dozen news organizations had written to the judge Oct. 20 opposing the defense's request to select jurors in secret.

"We're all aware that there's been intense media and public interest in this case. ... These procedures will ensure the First Amendment rights to public access as is necessary and required by law," Nathan said on a pretrial conference call.

Nathan also denied a defense request to prevent the public from seeing the blank questionnaire that will be given to about 600 people who will be summoned as prospective jurors in the high-profile case.

The selection of 12 primary jurors and six alternates is scheduled to begin Nov. 4, with opening statements set for Nov. 29. In selecting primary jurors, the defense will have 10 peremptory challenges and the prosecution will have six, Nathan said. For alternates, each side will get three challenges.

Maxwell's lawyers argued for questioning prospective jurors behind closed doors because they may be asked to divulge sensitive information, such as whether they have been sexually abused. Nathan said she would make adjustments on a case-by-case basis to "ensure juror candor and project juror privacy."

Maxwell lawyer Bobbi Sternheim said letting the public see the blank version of the questionnaire, which is used to screen the jury pool for biases, hardships, personal connections and awareness of the case, will lead people to lie their way into the jury process. She equated it to a "take-home exam" in which jurors could fill in answers they think will best position them to be selected.

Nathan, who will conduct one-on-one follow-up questioning Nov. 16-19 with prospective jurors who survive the questionnaire phase, responded: "If a juror is going to lie and be dishonest, we will smoke that out. And the fact of this questionnaire being publicly documented is not going to increase or decrease any such likelihood."

Maxwell, whose father was a British newspaper baron, has pleaded not guilty to charges that she recruited teenage girls from 1994 to 2004 for Epstein to sexually abuse during encounters that sometimes were described as sexualized massages. A revised indictment filed in March included allegations she groomed a 14-year-old girl to recruit other young females in return for cash.

Epstein killed himself at a Manhattan federal lockup in August 2019, a month after his arrest on sex-trafficking charges.

Maxwell, 59, joined the conference call Oct. 21 from an empty room at the Metropolitan Detention Center in Brooklyn, where she has been held since her July 2020 arrest. She didn't say much, except to complain about the call's faulty connection and to assure the judge she was still on the line when another communications mishap occurred.