Perspective
November 17, 2021 by The Associated Press 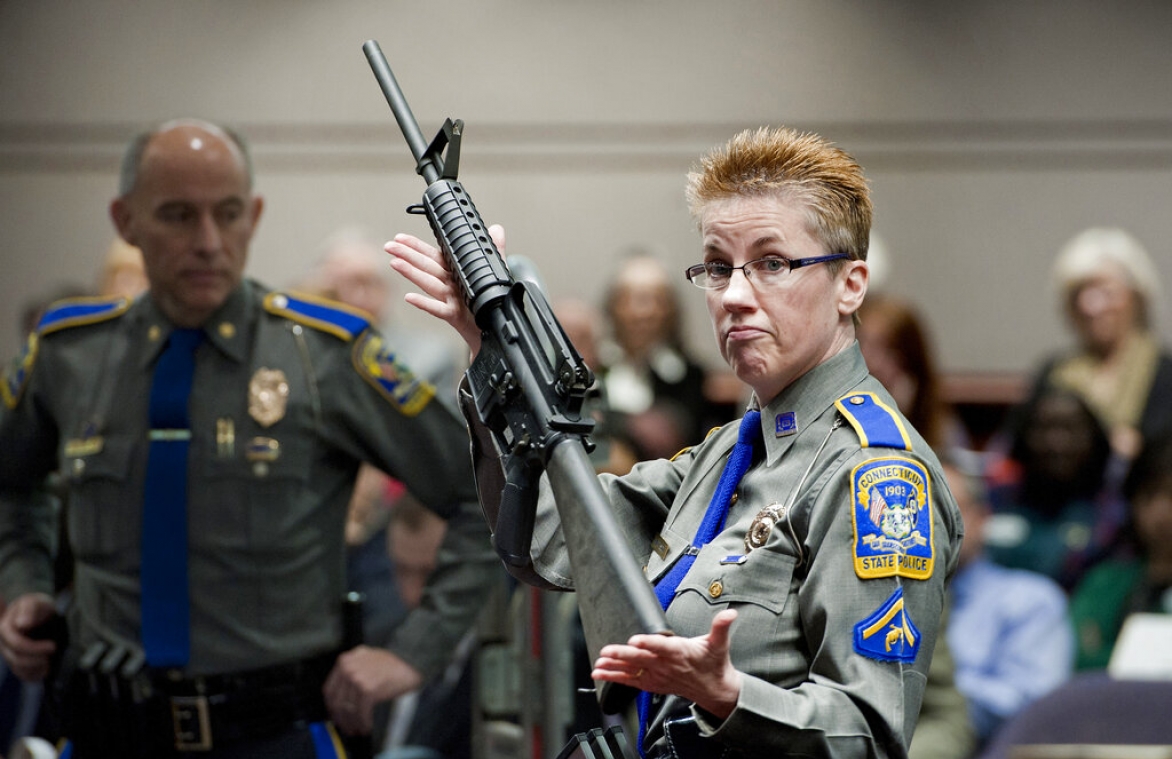 In this Jan. 28, 2013, file photo, firearms training unit Detective Barbara J. Mattson, of the Connecticut State Police, holds up a Bushmaster AR-15 rifle made by Remington Arms, the same make and model of the gun used by Adam Lanza in the December 2012 Sandy Hook School shooting, during a hearing of a legislative subcommittee in Hartford, Conn. AP Photo/Jessica Hill

By Enrique Armijo, Elon University, for The Conversation

The Conversation is an independent and nonprofit source of news, analysis and commentary from academic experts.

A Connecticut judge has found Alex Jones, a well-known media personality, liable in the defamation claim brought against him by parents of 6- and 7-year-old children killed in the Sandy Hook massacre for falsely claiming they were accomplices in faking the murders of their own children.

Like an earlier decision in a Texas court brought by different parents, the court entered a "default judgment," which means that Jones lost for failure to put on a defense to the parents' suit. But the fact that the parents' claims were not fully litigated means that important issues in the law of defamation remain unresolved.

It's reasonable to think the parents' case should have been easy to win, given the demonstrably false nature of Jones' statements. Yet defamation law isn't always straightforward.

I am a legal scholar who studies the intersection between the First Amendment and online speech. The Jones lawsuits illustrate the difficulties in winning such cases, and how modernizing current law would address the needs of the aggrieved and the ways we talk about public tragedies.

Here's the background: On Dec. 14, 2012, Adam Lanza shot and killed 20 6- and 7-year-olds at the Sandy Hook Elementary School in Newtown, Conn., along with six adults who worked at the school.

For several years afterward, Infowars host and conspiracy theorist Alex Jones questioned whether the shooting was faked by the Obama White House and co-conspirators in an effort to undermine gun rights in the United States.

Among other statements, Jones claimed that the shooting was a "giant hoax," was "staged" and had "inside job written all over it." He claimed that traumatized families and students were "lying … actors" in front of a CNN blue screen during Anderson Cooper's reporting from Connecticut. Jones compared the scene at the school to a Disney World hologram.

Sandy Hook parents were also harassed online and in person as "hoaxers" and "crisis actors" by members of Jones' audience.

In 2017, a reporter on Jones' show claimed that one of the Sandy Hook parents was lying when he said he held his son and saw a bullet hole in his son's head, since the slain students were identified via photographs. In fact, the coroner released the victims' bodies to their families for funeral purposes, so the parent's claim was true.

In response to these claims, several of the parents of children who died in the shooting at Sandy Hook for defamation.

For hundreds of years, defamation claims such as those made by the parents would have been a simple matter decided under state law.

Jones' false allegations that the parents lied would have been deemed harmful to the parents' reputations; a jury would assume money damages were appropriate; and Jones would have had to pay.

However, that changed in 1964 when the U.S. Supreme Court, in New York Times v. Sullivan, decided that the federal Constitution's First Amendment required state courts to strike a different balance.

Post-Sullivan, the First Amendment, which generally protects speakers from government interference, now had a significant role to play in defamation law, which has long given individuals the right to sue on the basis of oral and written statements that harmed their reputation.

In Sullivan, the Court decided that where the plaintiff claiming he was defamed by a defendant's statement was a "public official" — a politician or other high-level government officer — state defamation law had to be more lenient in order to protect the public's right to vigorously discuss such people, even where statements in that discussion turn out to be false.

The Court carved out this leeway by changing the standard of proof that the public official plaintiff had to show as part of his defamation claim.

That standard is known as "actual malice."

In other words, by protecting individuals' rights to speak freely about people in power, the Court promoted the democratic process at the expense of possible harms to the reputations of public officials.

Ten years later, in Gertz v. Welch, the Court extended the actual-malice standard to a new class of defamation plaintiffs. The Court called them "limited-purpose public figures" — otherwise private people who had voluntarily inserted themselves into controversies that were the subject of public discussion.

These people, concluded the Court, should, like public officials, also have to show actual malice in defamation suits. That's because they assume the risk, the justices said, of being talked about negatively and even falsely when they enter public debates "in order to influence the resolution of the issues involved."

But what about people who didn't choose to be public figures? Should they still be treated as such when they sue a speaker for defamation?

The Court said that "hypothetically, it may be possible for someone to become a public figure through no purposeful action of his own, but the instances of truly involuntary public figures must be exceedingly rare."

Count the families of the Sandy Hook dead among those rare involuntary public figures.

The internet has changed defamation law in deep and meaningful ways.

It has allowed prospective defamation plaintiffs to defend their reputations without resorting to lawsuits, by responding to stories about them online. Conversely, it has also helped authors correct disputed or false facts about story subjects more quickly and easily.

But the internet has also undermined the Supreme Court's statement in Gertz that the problem of an involuntary limited-purpose public figure was unlikely to occur.

By making public so much of daily life that was formerly private, the internet has made involuntary public figures out of many people who have suffered notable tragedies through no fault or risky behavior of their own.

All of which brings us back to Alex Jones.

In his legal defense, Jones initially argued that the plaintiff-parents are limited-purpose public figures — that they have inserted themselves into the larger controversy around gun rights in the U.S. — and they should therefore have to prove that his statements about them were made with knowledge that they were false. That argument was not fully resolved, because Jones stopped participating in the case. But as a matter of defamation law, the argument should fail.

True, many Sandy Hook parents became vocal participants in the anti-gun movement in the wake of the tragedy. Several have sued the maker of the gun used in the shooting. Others have organized online to try to prevent future similar attacks, and have gone online to call for greater gun control.

But making such individuals prove actual malice in their defamation suit against Jones — a much tougher standard to prove — would get the First Amendment backward. It would stifle important responses to disastrous events in individuals' private lives.

It would encourage individuals to take the tragedies that happen to them and swallow them silently.

No one would have volunteered for the kind of attention that the Sandy Hook parents have received. But if a court were to find that they were public figures because of that attention, then future parents might not speak out at all, which would do significant harm to the marketplace of ideas that the First Amendment is intended to promote.

Parents have the right to decide whether to grieve their children publicly or privately, and online or off. The degree of fault they might have to show in a defamation claim should not play any role in that decision.

Alex Jones' nonparticipation in the parents' suit, and the default judgment on his liability because of that nonparticipation, have relieved the Sandy Hook parents of the obligation to prove he was wrong.

But future plaintiffs like them should be able to grieve how they choose, including being public about their grief to try to prevent what happened to them from happening again. And they should be able to do so without the additional fear of damaging their ability to successfully sue for defamation for lies told about them by others seeking to make controversy at the expense of their grief.

This story is an updated version of an article that was published on June 1, 2018. This article is republished from The Conversation under a Creative Commons license.