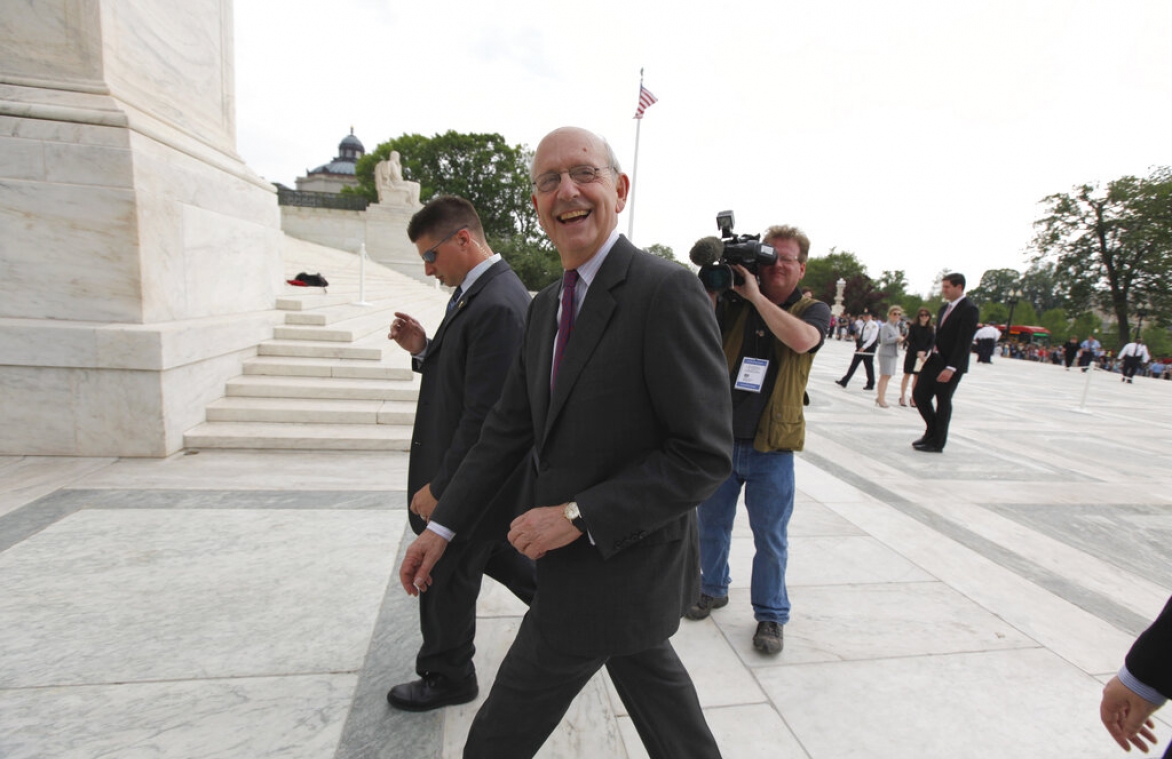 Supreme Court Associate Justice Stephen Breyer walks back in after escorting Britain's Prince Charles out of the Supreme Court in Washington, D.C., on May 3, 2011. AP Photo/Alex Brandon

With Associate Justice Stephen G. Breyer’s announcement that he would be leaving the U.S. Supreme Court at the end of the current session, most likely in late June, assessments of his judicial legacy begin. From a First Amendment standpoint, in his last five years on the Court Breyer added opinions to a number of prominent cases. Breyer is generally regarded as a moderate liberal who decides cases pragmatically rather than on the basis of ideology.

In Trinity Lutheran Church of Columbia, Inc. v. Comer (2017), Breyer wrote a concurring opinion in the ruling that a church child-learning center had been improperly excluded from aid because it was religious in nature, whereas in Espinoza v. Montana Department of Revenue (2020), he authored a dissent expressing the view that Montana had gone too far in requiring use of a state scholarship fund for students in private parochial schools.

In National Institute of Family and Life Advocates v. Becerra (2018), Breyer authored the dissent that would have upheld disclosure requirements for clinics serving pregnant women on the basis that the information amounted to appropriate consumer protection legislation. In Agency for International Development v. Alliance for Open Society International, Inc. II (2020), Breyer wrote another dissent that would have granted standing to foreign groups that were questioning a law requiring that they have a specific policy opposing “prostitution and sex trafficking,” and in Little Sisters of the Poor Saints Peter and Paul, Home v. Pennsylvania (2020) he joined Kagan’s concurring opinion in saying the rules regarding contraception that the government had applied to the Little Sisters of the Poor were overly broad.

In Roman Catholic Diocese of Brooklyn v. Cuomo (2020), Breyer issued a dissent to an opinion striking down a New York order limiting church gatherings during the Covid pandemic on the basis that he thought they were similar to those applied to other public meetings. He joined a similar dissent in the case of Tandon v. Newsom (2021).

At 83, Justice Breyer is, in 2022, the oldest member of the Supreme Court. Although some Democrats had encouraged him to resign earlier, he considered the decision to be personal and disliked the idea that such decisions should be calculated in a political fashion.

Nonetheless, Breyer’s resignation has created the opportunity for President Joe Biden to make his first appointment to the high court, to which President Donald Trump had appointed three justices. Biden has promised to nominate a black woman, who if confirmed would be the first black woman and would raise the number of female justices from three to four. Democrats, who have 50 seats in the Senate, which is responsible for Supreme Court confirmations, promised to act swiftly on any nomination he made, with obvious concern that should Republicans gain Senate seats in the 2022 elections, they might try to delay the nomination, as they did in the last year of the Obama administration, until after the next presidential election.

Biden’s nominee seems likely to be a liberal Democrat, and she might be philosophically somewhat to the left of Breyer – but would be unlikely to change the Court significantly from its current ideological makeup.