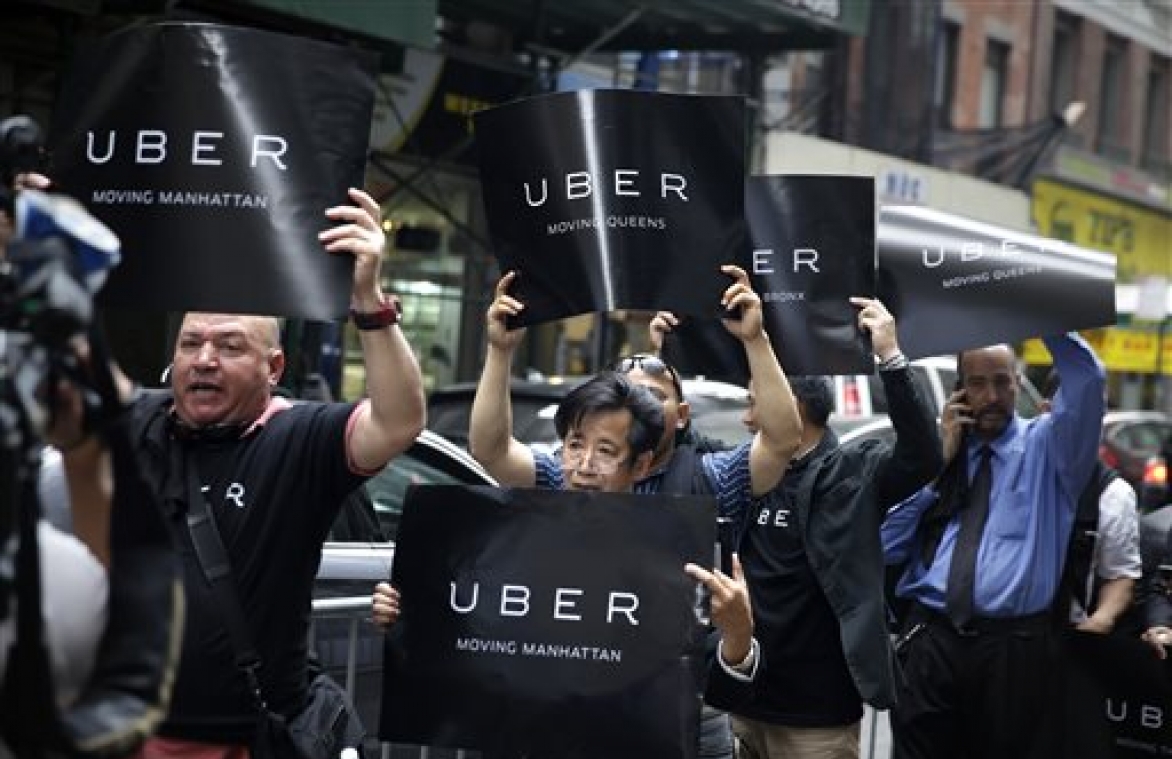 A panel for the 2nd Circuit Court upheld on July 16, 2019 a New York regulation prohibiting advertisements inside for-hire vehicles, such as Uber and Lyft. The company that sells an advertising software platform for Uber and Lyft challenged the rule, alleging it was an unconstitutional restriction on commercial speech protected under the First Amendment. In this photo, Uber drivers and their supporters can be seen protesting in front of the offices of the Taxi and Limousine Commission in New York in May 2015 before the commission decided to require the car services to comply with many of the rules that govern the yellow cabs they compete with.  (AP Photo/Seth Wenig)

A New York City rule prohibiting advertisements inside for-hire vehicles (FHVs) does not violate the First Amendment, a federal appeals court has ruled.   Vugo, Inc., a Minnesota-based business which wants to sell an advertising software platform for Uber and Lyft, challenged the rule as a violation of its free-speech rights.

The city’s Taxi and Limousine Commission (TLC) instituted the ban two decades ago after hearing many passengers complain about video advertisements in taxis.  The TLC instituted the ban for both taxicabs and FHVs, like Uber and Lyft.  The rules prohibited both exterior and interior ads unless they were specifically approved by the TLC.

The only advertisements permitted currently by the TLC are advertising associated with so-called “Taxi TV” – the system in taxicabs that allows passengers to pay their fares by credit cards.   The TLC permitted some advertising on Taxi TV to offset the costs of the Taxi TV borne by the taxicabs.  However, there is nothing equivalent to Taxi TV for FHVs.

Vugo sued the city in October 2015, alleging First Amendment claims.  A federal district court struck down the ban, reasoning that the city violated the First Amendment by banning such ads but permitting ads associated with Taxi TV. The district court ruled that there were less speech-restrictive alternatives that the city could have implemented to ensure passenger comfort without a blanket ban on advertising.

On appeal, a three-judge panel of the 2nd U.S. Circuit Court of Appeals reversed and ruled in favor of the city.   The appeals court applied the U.S. Supreme Court’s so-called “Central Hudson Test” from Central Hudson Gas & Elec. Corp. v. Public Service Comm’n of N.Y. (1980).    Under this test, the government can freely regulate commercial speech, or advertising, that is false or misleading.   If the speech is not false or misleading, then the government must establish that it has a substantial interest in the speech regulation; that the speech regulation directly advances the government’s substantial interest; and that the regulation is narrowly drawn.

Vugo had argued that the court should apply stricter review of the advertising ban under the Supreme Court’s more recent decision in Sorrell v. IMS Health, Inc. (2011).  However, the 2nd Circuit panel in Vugo, Inc. v. City of New York determined that the “Central Hudson Test” still governs the evaluations of regulations on commercial speech.

Court ruled government had a 'substantial interest' in advertising ban

The panel then turned to the next prong of the Central Hudson test – whether the city’s ad ban directly advanced its substantial interest.   Vugo argued that the ad ban did not directly advance the city’s interests because it contained an exception for Taxi TV.   The appeals court panel was not persuaded.  “First, the ban materially advances the City’s interest in reducing passenger annoyance, notwithstanding the Taxi TV exception,” the panel wrote.  “Second, the City’s justification for the Taxi TV exception is sufficiently related to its interest in enacting the ban because both are aimed at improving the overall in-ride experience, albeit in different ways.”

Vugo argued the ban was inconsistent since Taxi TV was allowed

Vugo argued that the appeals court should take heed of the Supreme Court’s decision in Rubin v. Coors Brewing Co. (1995) where the Court invalidated a ban on advertising the alcoholic content on beer labels in part because the very same law mandated the disclosure of alcoholic content on liquor and wine.   In other words, the Court invalidated the beer content ad ban because the law was internally inconsistent.  Here, the 2nd Circuit determined that the exception for Taxi TV did not doom the ad ban.

Finally, the appeals court panel addressed the final prong of the test – whether the law is narrowly drawn.   The panel deferred to the city’s judgment that a flat ad ban was necessary.   The panel analogized to Supreme Court precedent intimating that cities can sometimes impose onerous limitations on billboard advertising.

The 2nd Circuit panel decision is an interesting one.   The TLC’s regulations seem discriminatory on their face, because they allowed the exception for advertising in taxicabs with Taxi TV but impose a flat ban on such advertising in FHVs.

If Vugo appeals, it might find a more favorable audience at the full panel of the 2nd Circuit or perhaps even the U.S. Supreme Court.