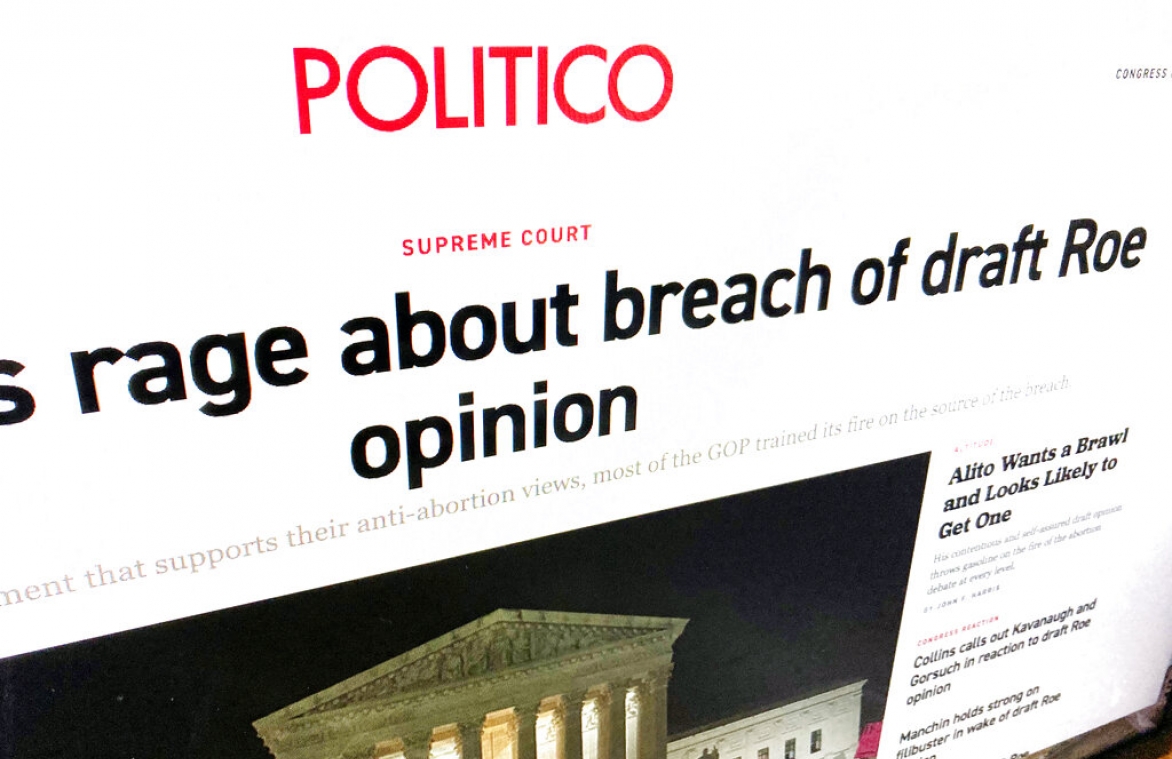 The politico.com website is photographed in Washington, D.C., on May, 3, 2022. AP Photo/Wayne Partlow

NEW YORK (AP) — In breaking news of a Supreme Court draft opinion that would strike down 50 years of abortion policy, Politico's highest-impact moment also put the news organization squarely in the middle of one of society's most contentious issues.

Politico sent a memo to staff members on May 3 saying it had restricted access to its offices and told security to be "extra vigilant" about visitors. The company also urged employees to consider removing their Politico affiliation on social media accounts.

The company has not reported any specific threats.

But the story on the Court's apparent readiness to overrule the 1973 Roe v. Wade case that legalized abortion nationwide led to wide speculation online about Politico's sources, some of it specific and malevolent.

The Federalist, a conservative website, headlined a story: "The SCOTUS Abortion Decision Leak is what Actual Treasonous Insurrection Looks Like." The site said it believed the news was leaked to bully justices into changing their votes.

Politico's story struck like a thunderclap when posted at 8:32 p.m. Eastern on May 2. It's very rare for internal Supreme Court discussions to be made public, and unprecedented for a full draft decision to see the light of day — much less for one of the most closely watched cases to come before justices in years.

"I gasped and reflexively put my hand over my mouth," journalist Emily Kaplan wrote on Twitter. "Haven't done that since Election Night 2016."

The story, written by Josh Gerstein and Alexander Ward, said the Supreme Court had already voted to eliminate Roe as a precedent. It linked to a copy of the draft decision which, according to a stamp on it, was written by Justice Samuel Alito and circulated within the Court on Feb. 10, 2022.

Politico emphasized it was a draft decision that could change. In the article, Politico said it had received a copy of the draft opinion "from a person familiar with the court's proceedings" in the case that was argued Dec. 1, along with "other details supporting the authenticity of the document."

That would seem to limit the potential sources: Each one of the Court's nine justices has four clerks and there is an unknown number of support staff. It was not clear whether Politico had an electronic or hard copy of the decision.

The story was a closely held secret even within Politico, with few people knowing that it was coming. At the time it was posted, Politico's top news executives, Editor-in-Chief Matt Kaminski and Executive Editor Dafna Linzer, sent a memo to the full staff about it.

"After an extensive review process, we are confident of the authenticity of the draft," the executives wrote. "This unprecedented view into the justice's deliberations is plainly news of great public interest."

Politico gave no details about how it concluded the document was real and not a fake, or how long it had been in possession of the draft. The company said that "our journalism speaks for itself."

The draft's authenticity was ultimately confirmed Tuesday by Supreme Court Chief Justice John Roberts, who announced an investigation into who leaked the document.

It's understandable that Politico is going to great lengths to protect the identity of its source, said Kelly McBride, expert on journalism ethics for the Poynter Institute think-tank.

Yet while fellow journalists understand why it's a huge story and why Politico published it, that might not be clear to a general public unfamiliar with how journalism works and often suspicious of motives, she said. Politico should have considered communicating some of that with readers.

"It's going to have such massive consequences that I don't think that it's hard to explain why you did it," she said.

Politico doesn't have the footprint of The New York Times, The Washington Post or The Associated Press — all of whom were chasing its story — but it is a well-known brand name for those who follow Washington closely. Launched in 2007 by former Washington Post reporters John Harris and Jim VandeHei, it aggressively covers government and political news. Its morning "Playbook" newsletter is an influential agenda-setter for the nation's elite.

The expanding company was bought last year by German publisher Axel Springer for a price reported to be around $1 billion.

"The fact that they broke this story and their name is all over it distinguishes their journalism and puts their name in both the history books and the textbooks," said Frank Sesno, a former CNN Washington bureau chief and professor at George Washington University.