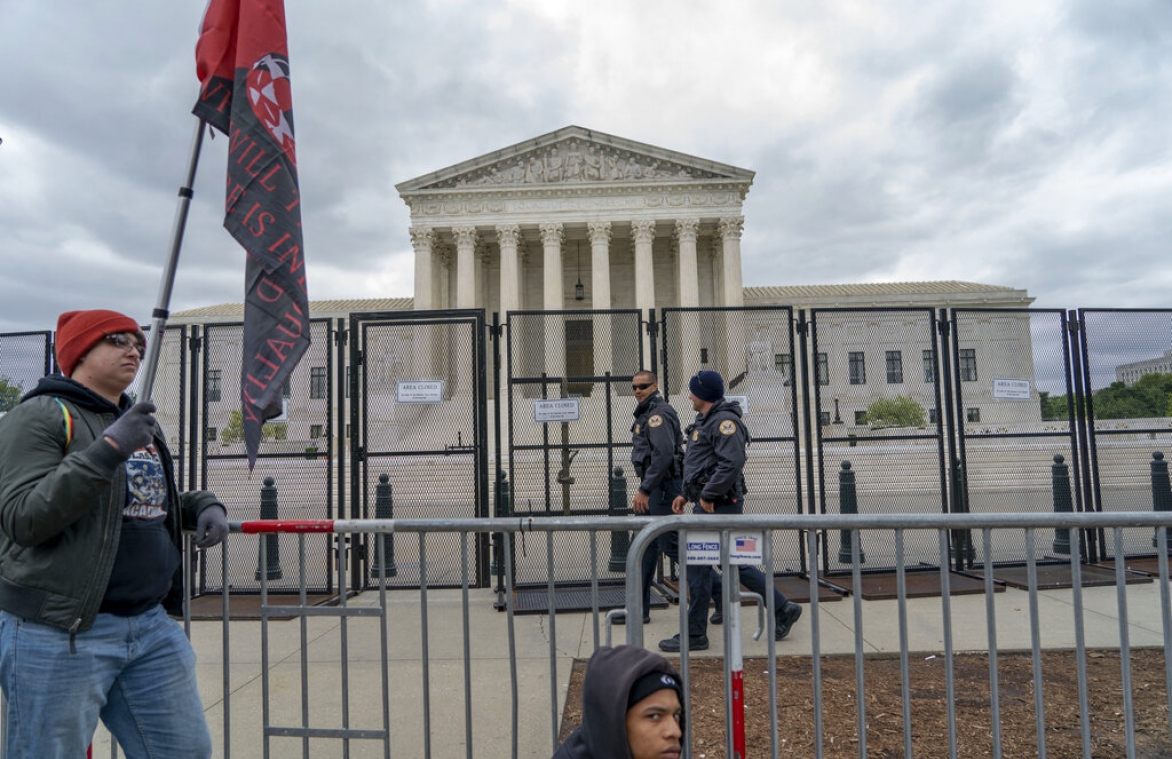 Abortion-rights protesters display flags during a demonstration outside of the U.S. Supreme Court on May 8, 2022, in Washington, D.C. AP Photo/Gemunu Amarasinghe

WASHINGTON (AP) — The Senate passed legislation on May 9 to beef up security for Supreme Court justices, ensuring they and their families are protected as the Court deliberates abortion access and whether to overturn the landmark Roe v. Wade decision.

The bipartisan bill, which passed by voice vote with no objections, did not provide additional funding, which could come later. But it aims to put the Court on par with the executive and legislative branches, making certain the nine justices are provided security as protesters have gathered outside their homes. The bill now moves to the House for its consideration.

Protests have erupted in front of the Supreme Court Building and around the country after a leaked draft opinion suggested a majority of conservatives on the Court are prepared to end the constitutional right to an abortion.

The Senate legislation is a technical change that allows Supreme Court law enforcement to provide around-the-clock security to immediate family members, in line with protection for some people in the executive and legislative branches. It was sponsored by Sens. Chris Coons, D-Del., and John Cornyn, R-Texas.

Cornyn said threats to Supreme Court justices and their families are "disgraceful" and attempts to intimidate the independence of the judiciary branch shouldn't be tolerated.

"The House must take up and pass it immediately," Cornyn said.

Passage of the legislation came as more than 100 people gathered Monday night outside Justice Samuel Alito's home in Virginia, lighting candles and chanting, "Abort the court!"

Dozens of people also gathered over the weekend outside the homes of Justice Brett Kavanaugh and Chief Justice John Roberts in the Washington and Maryland suburbs.

White House press secretary Jen Psaki tweeted May 9 that President Joe Biden "strongly believes in the Constitutional right to protest. But that should never include violence, threats, or vandalism. Judges perform an incredibly important function in our society, and they must be able to do their jobs without concern for their personal safety."

Police have set up a tall fence and blocked off streets this week as people have protested in front of the Supreme Court Building, which is across from the U.S. Capitol. They have also shut down the plaza and steps in front of the building.

"Trying to scare federal judges into ruling a certain way is far outside the bounds of normal First Amendment speech or protest," Republican Senate leader Mitch McConnell said ahead of the vote.