Dueling facts: private prayer or a pep rally for God? 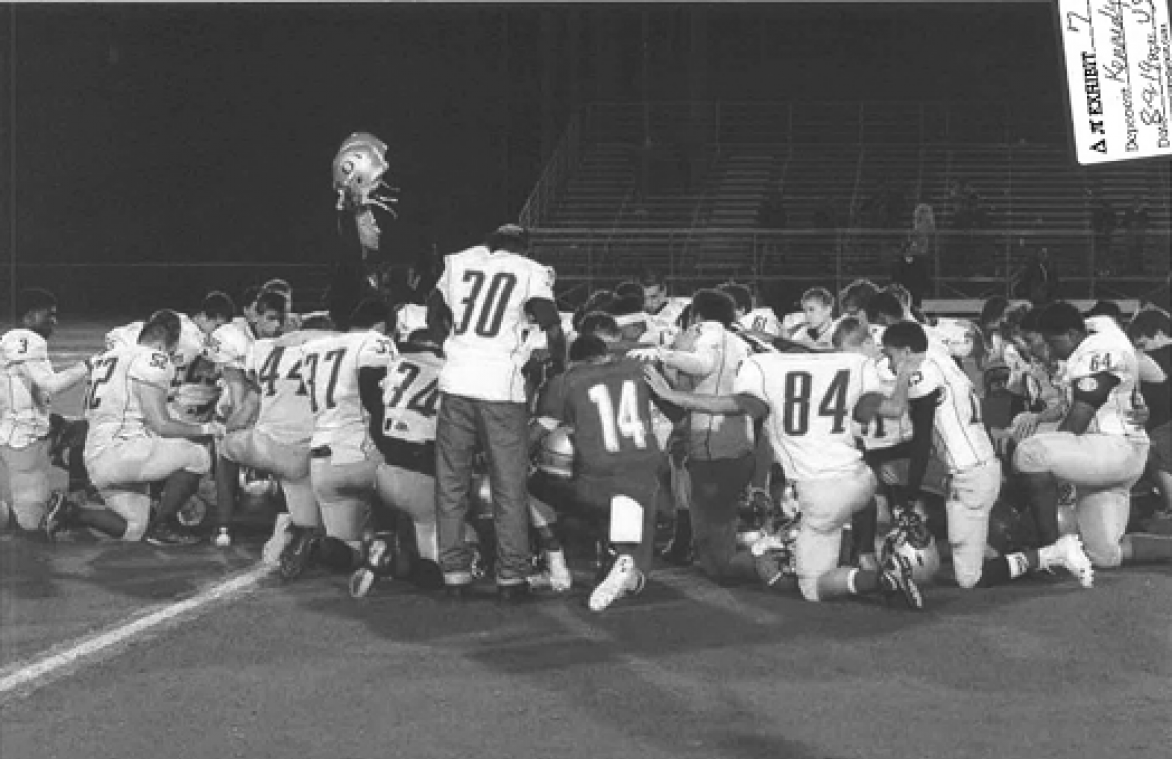 Writing for the majority in Kennedy v. Bremerton, Justice Neil Gorsuch began with this succinct description of the case: “Joseph Kennedy lost his job as a high school football coach because he knelt at midfield after games to offer a quiet prayer of thanks. Mr. Kennedy prayed during a period when school employees were free to speak with a friend, call for a reservation at a restaurant, check email, or attend to other personal matters. He offered his prayers quietly while his students were otherwise occupied. Still, the Bremerton School District disciplined him anyway.”

That can only leave the reader wondering, “How in the world did this ever get all the way to the Supreme Court?”

After all, this is a nation founded on religious freedom. This poor man was just going off by himself to quietly share a few thoughts with God, well away from the trappings of a high school football game. Surely he has a right to do that, even if he works for a public high school that is bound to avoid entanglement with religion. It’s clearly a private moment of faith and reflection.

And then you see the photographs, helpfully published in the dissent by Justice Sonia Sotomayor. There in the middle of the field is Kennedy, standing with arm upraised and football helmet in hand over a very large huddle of young men on the football field. This is no pastoral scene of private worship; it’s a pep rally for God.

The majority opinion does note that students would sometimes ask to pray alongside the coach, but it certainly doesn’t convey the scope of what was happening.

In 2015, after learning of Kennedy’s prayers, the school district looked into the coach’s conduct.

“It learned that, since his hiring in 2008, Kennedy had been kneeling on the 50-yard line to pray immediately after shaking hands with the opposing team,” Sotomayor wrote. “Kennedy recounted that he initially prayed alone and that he never asked any student to join him. Over time, however, a majority of the team came to join him, with the numbers varying from game to game. Kennedy’s practice evolved into postgame talks in which Kennedy would hold aloft student helmets and deliver speeches with ‘overtly religious references,’ which Kennedy described as prayers, while the players kneeled around him. The District also learned that students had prayed in the past in the locker room prior to games, before Kennedy was hired, but that Kennedy subsequently began leading those prayers too.”

Just as Gorsuch’s narrative sounded perfectly reasonable, so too does Sotomayor’s. In her account, the football coach had long ago crossed the line from personal reflection into unconstitutional proselytizing.

The majority opinion is dismissive of this argument, focusing instead on the specific language used by the school district in disciplining Kennedy: “The contested exercise here does not involve leading prayers with the team; the District disciplined Mr. Kennedy only for his decision to persist in praying quietly without his students after three games in October 2015.” Rather than focus on the entirety of the circumstances, the majority treats the school district’s letter as though it were a flawed indictment.

This case contrasted a public employee’s right to personal worship with a public school district’s constitutional mandate not to entangle public education with religion. The currently configured court consistently supports the former at the expense of the latter.

At a time when the Supreme Court’s approval rating has steadily declined, the public is hungry for clarity and consistency. If the Court can’t agree on the facts, Americans will never understand the decision.