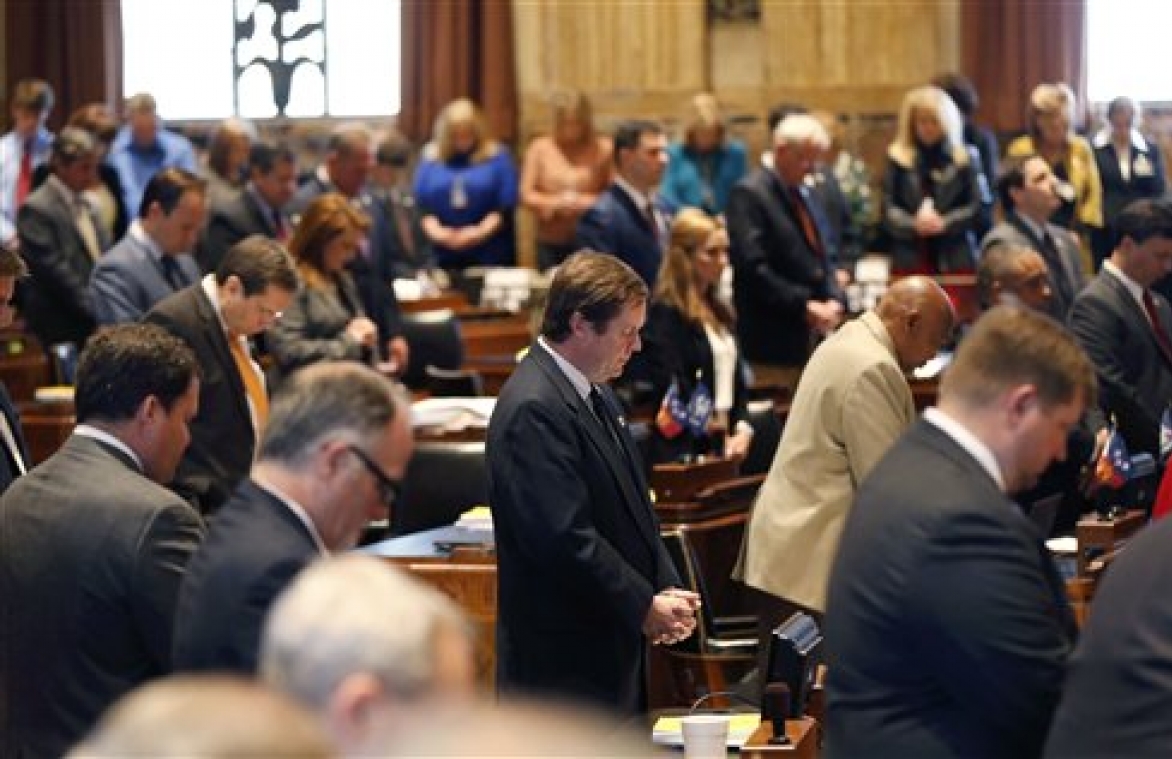 A panel of the 3rd U.S. Circuit Court of Appeals on Aug. 23, 2019 upheld the Pennsylvania House of Representative's policy to restrict open prayers to theists, and to exclude nontheists, turning back a challenge that the practice violated the establishment clause of the First Amendment. (Opening a legislative session with a prayer is common across the country. In this photo, Louisiana lawmakers bow their heads in prayer at the opening of a special legislative session in the state House chamber in Baton Rouge, La., Sunday, Feb. 14, 2016. AP Photo/Gerald Herbert, used with permission from The Associated Press.)

The Pennsylvania House of Representatives may restrict its opening prayers to theists and exclude nontheists without violating the Establishment Clause, a federal appeals court has ruled.   The appeals court reasoned that the practice fits within the “historical tradition of legislative prayer.”

The House’s policy allows either legislators or guest chaplains to open sessions with prayer.  A guest chaplain must be “a member of a regularly established church or religious organization” and the opening prayer serves as a chance for members “to seek divine intervention in their work and their lives.”

Interpreted by the House, these measures amount to a rule that prohibits Secular Humanists, Unitarian Universalists, and Freethinkers from delivering prayer because they do not profess belief in a higher power.

A group of nontheists contended that the theists-only policy violated the Establishment Clause, the Free Exercise Clause, the Free Speech Clause, and the Equal Protection Clause.   A reviewing federal district court determined that legislative prayer was a form of government speech and thus immune from challenge under the Free Exercise, Free Speech, and Equal Protection Clauses.    If speech is deemed to be government speech, it is immune from constitutional scrutiny.

However, the Establishment Clause is an exception.   And the federal district court ultimately held that the theists-only policy violated the church-state separation principle.

On appeal, a divided three-judge panel of the 3rd U.S. Circuit Court of Appeals reversed on the Establishment Clause issue in its August 23, 2019, opinion in Fields v. Speaker of the Pennsylvania House of Representatives.

The appeals court also relied on the Supreme Court’s more recent decision in American Legion v. American Humanist Association (2019), in which the Court ruled a 33-foot Latin cross honoring World War I veterans did not violate the Establishment Clause.   In American Legion, the Court emphasized that the memorial “must be viewed in historical context” – a phrase seized upon by the 3rd Circuit.

“Instead of rocking the constitutional boat, today we merely observe what the Supreme Court has long taken as given: that prayer traditionally presumes a higher power,” the majority wrote.  “Because this notion flows from the historical understanding and practice of legislative prayer, it lends further support to the policy of the Pennsylvania House.”

With respect to the Free Speech, Free Exercise, and Equal Protection challenges, the panel majority agreed with the district court that those claims are foreclosed by the government speech doctrine.

Judge Luis Felipe Restrepo dissented, finding that the theist-only policy violated the Establishment Clause.  He determined that the Pennsylvania House’s practice of excluding certain would-be guest chaplains of certain religious faiths to be exclusionary and unconstitutional.

“By mandating that all guest chaplains profess a belief in a ‘higher power’ or God, the Pennsylvania House fails to stay neutral in matters of religious theory,” he wrote.