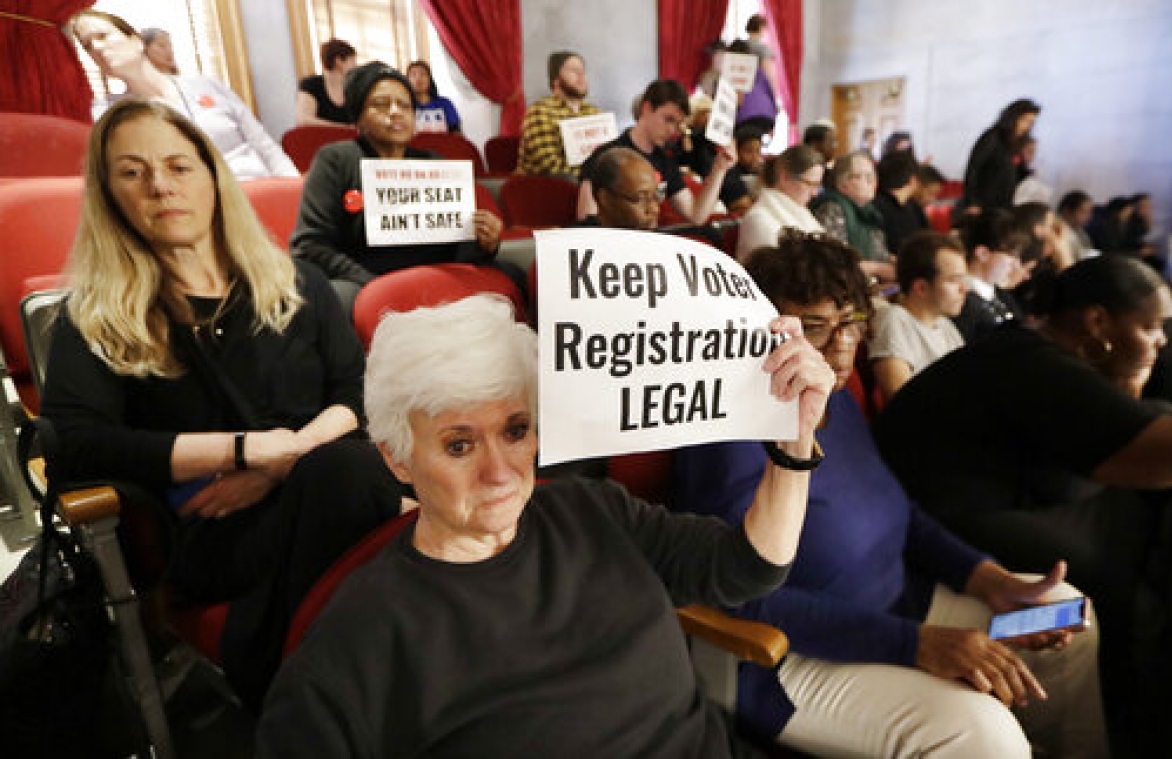 In this April 15, 2019, file photo, Suzanne Lanier, front left, holds up a sign in the House gallery as she and others oppose a bill pushed by the Tennessee Secretary of State that would impose new restrictions on groups that hold voter registration drives in Nashville, Tenn. A federal judge on Monday, Sept. 9, 2019, sternly criticized Tennessee's new restrictions for signing up voters and refused to dismiss a legal challenge against the new law set to take effect in October. (AP Photo/Mark Humphrey, File, used with permission from The Associated Press.)

A federal judge on Monday sternly rejected the state of Tennessee’s arguments that its new voter registration law was free of First Amendment concerns and laid out what could be a difficult path ahead to defend its constitutionality.

The law establishes new requirements for organizations who conduct voter registration drives and imposes civil and criminal penalties for those who don’t comply.

Secretary of State Tre Hargett, whose office oversees elections, had argued that such penalties were necessary to improve election security.

The bill was a reaction to a situation in Shelby County last year in which the Tennessee Black Voter Project turned in thousands of voter registration forms just before the deadline, many of which were incomplete. The local election commission was overwhelmed in processing the forms.

“[W]e had a lot of outsiders, contractors and other people coming in and flooding the local election commission and the state with [voter registration forms] right before the election,” state Rep. Tim Rudd told a House subcommittee last year. Lawmakers said they were concerned incomplete or erroneous forms by activist groups would overwhelm local voter registration authorities and put legitimate registrations at risk.

After the law was signed by the governor, several groups in May including the League of Women Voters, Mid-South Peace & Justice Center, and Rock the Vote, filed a lawsuit against the state, arguing the law was unconstitutional because it restricted rights of speech and association under the First Amendment.

They argued that the law was vague and overly burdensome, had a chilling effect on their voter registration drives, and put them at risk of costly fines.

The state filed a motion to dismiss the lawsuit, arguing that the new law “does not prohibit or burden political expression or organization — because collecting a form and forwarding it to the proper officials is neither speech nor (freedom of) association.”

Judge: Law's burden on First Amendment rights cannot be out of proportion to state's interest

However, U.S. District Judge Aleta Trauger pointed to a line of cases in which encouraging others to register to vote was found to be “core First Amendment activity” and involved political speech that educated potential voters about political participation.

“Whatever it means for a voter registration drive to have been done ‘properly,’ the state has a legitimate, and indeed probably compelling, interest in ensuring that individuals who seek to register to vote are able to do so without their efforts being thwarted by an incompetent or unscrupulous middleman,” Trauger wrote. “The determinative question … is whether the Act’s response to that interest actually fits the specific evil that each provision is intended to address. Neither standard will tolerate a burden on the plaintiffs’ First Amendment rights that is unnecessary or out of proportion to the statute’s legitimate ends.

In her denial of the motion to dismiss the case, Trauger combed through many of the law’s new requirements, including mandatory registration and training before beginning voter drives, the penalty structure for incomplete registrations and a condition that all communications by the organizations about voter registration carry a disclaimer that they are not part of the Secretary of State’s authorized efforts.

In each, the judge found that the plaintiffs had stated plausible claims and in some instances, she expressed outright doubt that the law’s supposed benefits could overcome the constitutional problems raised by the plaintiffs.

For example, in examining the law’s civil penalties structure, she noted that “the 10-day hand-in requirement and the penalties for incomplete forms puts the plaintiffs in an unnecessary double bind. There are good reasons to require operators of voter registration drives to turn in all of their collected applications and to do so in a timely manner. But by imposing the 10-day requirement, the Act is also, by necessity, requiring people and organizations to turn in applications that they know to be incomplete. The Act, therefore, punishes a person or organization for doing too much of something that it requires them to do.”

Trauger also pointed out that the burdens put on the organizations, if found to be true, are avoidable and that other less onerous ways could exist to attack problems.

“If Tennessee is concerned that voter registration drives are being done incompetently, it can engage in public education efforts without relying on a complex and punitive regulatory scheme. If it is concerned that the drives are being done fraudulently — for example, by a person or organization collecting forms and never turning them in — it can punish the fraud rather than subjecting everyone else to an intrusive prophylactic scheme that true bad actors would likely evade regardless.

“If the state is concerned about incomplete voter registration forms, it can devote resources to identifying them quickly and working with voters to complete them. If it is concerned that processing a large number of registration applications is too costly and difficult, it can make registration simpler.

“And if, after that, Tennessee is still concerned about the cost, then, as understandable as that concern may be, bearing the cost is what the Constitution requires. Having an active and engaged electorate can cost money; not having one can cost more. ‘Election day—next year, and two years later, and two years after that—is what links the people to their representatives, and gives the people their sovereign power.’ Rucho v. Common Cause, 139 S. Ct. 2484, 2512 (2019) (Kagan, J., dissenting).

“Local election authorities, in many ways, are the custodians of that bond. No one in this case disputes that it is crucial to the functioning of our system of government that county election commissions have resources proportionate to the scale and importance of their responsibilities.  But restricting voter registration drives in order to try to preserve election commission resources is like poisoning the soil in order to have an easier harvest. There is no point in taking a step to preserve resources if, by doing so, one thoroughly compromises the reason that the resources were important in the first place.”\

Deborah Fisher is director of the John Seigenthaler Chair of Excellence in First Amendment Studies in the College of Media and Entertainment at Middle Tennessee State University.