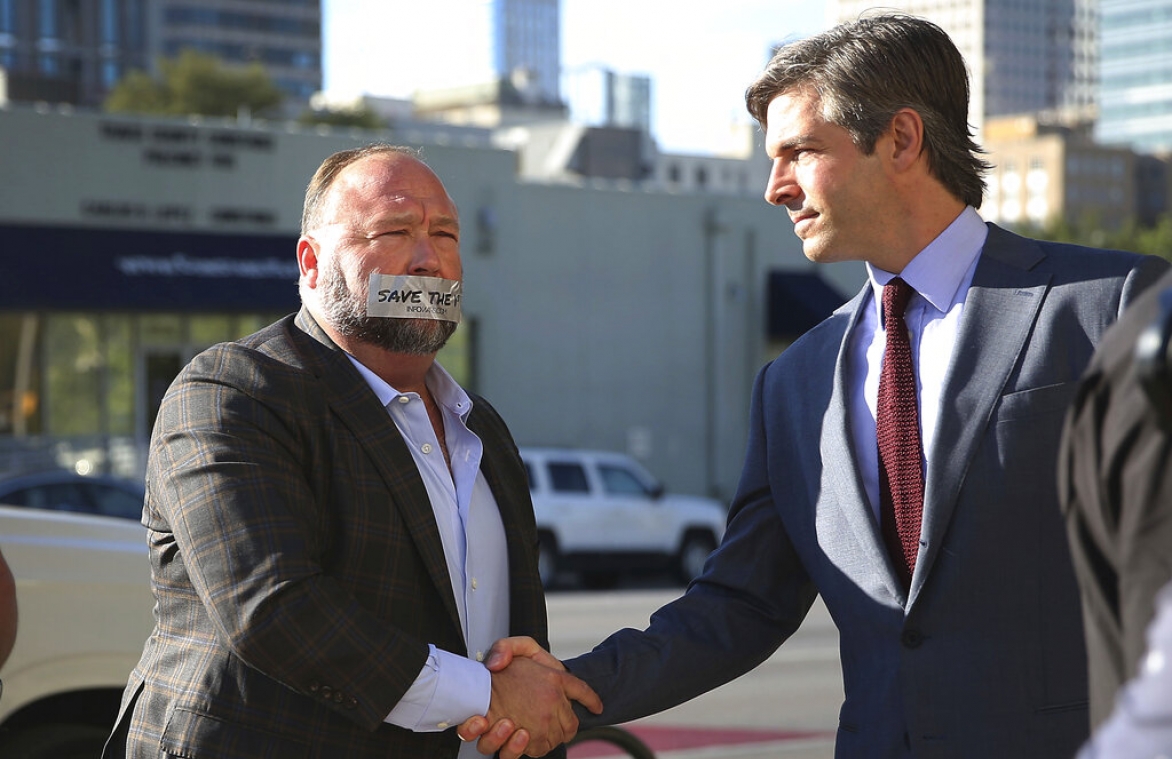 Alex Jones, left, arrives at the Travis County Courthouse in Austin, Texas, on July 26, 2022, with a piece of tape over his mouth that reads "Save the 1st." He shook hands with his lawyer, Andino Reynal. Briana Sanchez/Austin American-Statesman via AP, pool, file

Conspiracy theorist Alex Jones arrived at a Texas courthouse for his defamation trial for calling the Sandy Hook Elementary School attack a hoax with the words "Save the 1st" scrawled on tape covering his mouth.

Although Jones portrays the lawsuit against him as an assault on the First Amendment, the parents who sued him say his statements were so malicious and obviously false that they fell well outside the bounds of speech protected by the constitutional clause.

The ongoing trial in Austin, which is where Jones' far-right Infowars website and its parent company are based, stems from a 2018 lawsuit brought by Neil Heslin and Scarlett Lewis, whose 6-year-old son was killed in the 2012 attack along with 19 other first-graders and six educators.

Jones took the stand Aug. 2 in his own defense.

Here's a look at how the case relates to the First Amendment:

They are. Defamation laws evolved through decades of U.S. Supreme Court rulings on what is and isn't protected speech.

Typically, the first question jurors answer at trials is whether the speech qualifies as unprotected defamation. If it does, they address the question of damages.

Jones' trial largely skipped the first question and went straight to the second. From the start, it focused not on whether Jones must pay damages, but how much.

Why is his trial different?

Jones seemed to sabotage his own chance to fully argue that his speech was protected by not complying with orders to hand over critical evidence, such as emails, which the parents hoped would prove he knew all along that his statements were false.

That led exasperated Judge Maya Guerra Gamble to enter a rare default judgment, declaring the parents winners before the trial even began.
Judges in other lawsuits against Jones have issued similar rulings.

"I don't know why they didn't cooperate," said Stephen D. Solomon, a founding editor of New York University's First Amendment Watch. "It is just really peculiar. ... It's so odd not even to give yourself the chance to defend yourself."

It might suggest Jones knew certain evidence would doom his defense.

"It is reasonable to presume that (Jones) and his team did not think they had a viable defense ... or they would have complied," said Barry Covert, a Buffalo, N.Y., First Amendment lawyer.

Have both sides referred to the First Amendment?

Jones' lawyer Andino Reynal said the case is crucial to free speech. Jones made similar arguments in a deposition.

"If questioning public events and free speech [are] banned because it might hurt somebody's feelings, we are not in America anymore," he said.

Jones, who had said actors staged the shooting as a pretext to strengthen gun control, later acknowledged the massacre occurred.

What are key elements of defamation?

Defamation must involve someone making a false statement of fact publicly — typically via the news media — and claiming that it's true. An opinion can't be defamatory. The statement also must have done actual damage to someone's reputation.

The parents suing Jones say his lies about their child's death harmed their reputations and led to death threats from Jones' followers.

Is it easier for non-public figures to prove defamation?

Yes. They must merely show a false statement was made carelessly.

In New York Times v. Sullivan in 1964, the Supreme Court said the bar for public figures must be higher because scrutiny of them is so vital to democracy. They must prove "actual malice," that a false statement was made "with knowledge that it was false or with reckless disregard of whether it was false or not."

Their lawyers say they clearly aren't in the category of politicians or celebrities who stepped voluntarily into the public arena. The Supreme Court, however, has said those who temporarily enter public debates can become temporary public figures.

Jones argues that parent Neil Heslin did just that, entering the national debate over guns by advocating for tougher gun laws on TV and before Congress.

What damages are being sought?

The plaintiffs are seeking $150 million for emotional distress, as well as reputational and punitive damages.

Reynal told jurors that Jones has been punished enough, losing millions of dollars and being booted off major social media platforms. He asked them to award the plaintiffs $1.

Could Jones have won if the trial were all about free speech?

He could have contended that his statements were hyperbolic opinion — that wild, non-factual exaggeration is his shtick.

But it would have been tough to persuade jurors that he was merely riffing and opining.

"It was a verifiable fact the massacre occurred at Sandy Hook," said Solomon. "That's not opinion. It is a fact." Even if the parents were deemed public figures, imposing the higher defamation standard, "I think Alex Jones would still lose," he said.

But Covert said defamation is always a challenge to prove.

"I wouldn't discount the possibility Jones could have prevailed," he said. "Trying to speculate what a jury would find is always a fool's errand."

Might the Supreme Court be sympathetic to any Jones appeal?

Conservatives and liberal justices have found that some deeply offensive speech is protected.

In 2011, the high court voted 8-to-1 in Snyder v. Phelps to overturn a verdict against the Kansas-based Westboro Baptist Church for picketing military funerals with signs declaring that God hates the U.S. for tolerating homosexuality.

"As a Nation we have chosen ... to protect even hurtful speech ... to ensure that we do not stifle public debate," the ruling said.

But Westboro and the Jones case have key differences.

"The were both extreme, outrageous, shocking, deplorable. But the Westboro Baptist Church was also manifestly political and not defamatory ... not about any one person's reputation" Goldberg said.

He added: "I'd be shocked if (Jones') case ever ended up in the Supreme Court."