News
September 20, 2022 by The Associated Press 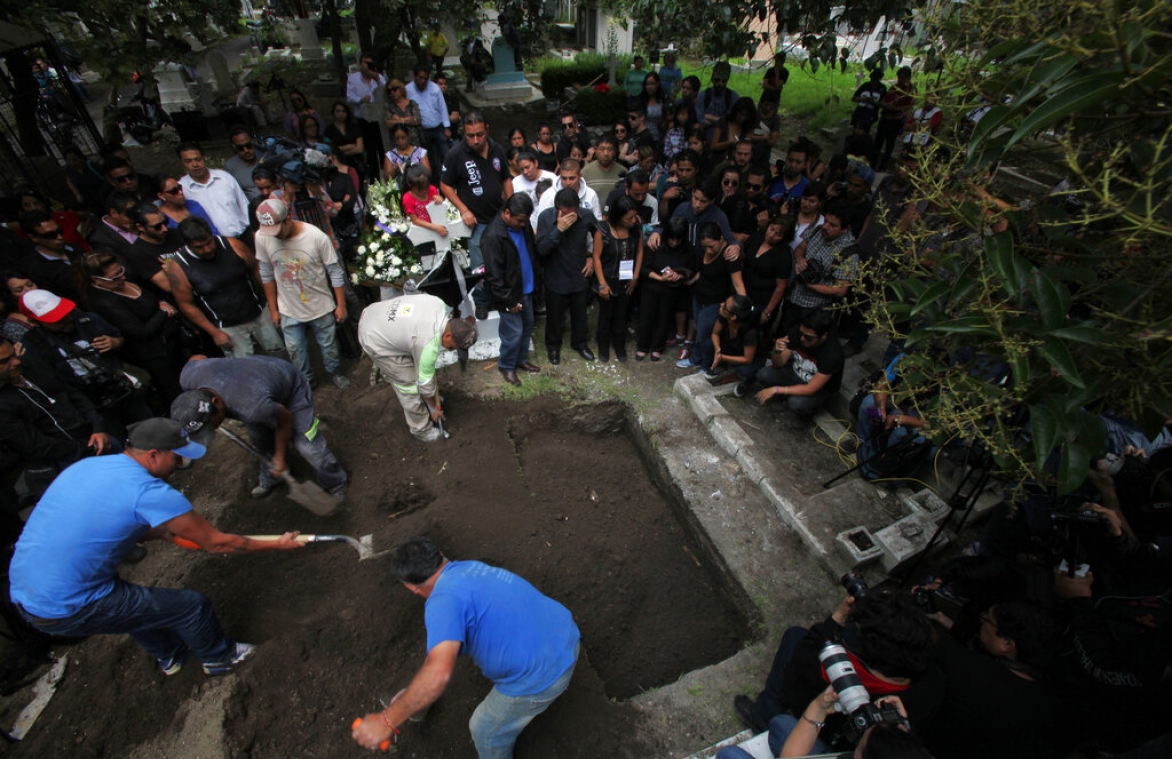 The body of murdered photojournalist Ruben Espinosa is put to rest during his funeral service in Mexico City, Monday, Aug. 3, 2015. With an investigation barely underway, Mexican journalist-protection groups are already expressing fears that authorities won't consider Espinosa's brutal killing as being related to his work, even though he fled the state he covered fearing for his safety. Espinosa, 31, worked for the investigative magazine Proceso and other media in Veracruz state. AP Photo/Marco Ugarte

The People's Tribunal on the Murder of Journalists, which has no legal authority, delivered a judgment Sept. 19 aimed at holding the governments accountable, while relatives holding photos of their loved ones watched from the pews of a 17th-century church in The Hague.

"In view of the overwhelming and compelling evidence ... the states of Mexico, Sri Lanka and Syria are guilty of all the human rights violations brought against them in the indictment," said Eduardo Bertoni, a professor at Buenos Aires University School of Law and one of the tribunal's nine self-appointed judges.

He noted that none of the governments submitted any defense despite being invited to do so.

The initiative, backed by Free Press Unlimited, the Committee to Protect Journalists and Reporters Without Borders, spent a year investigating the killings of three journalists — Miguel Ángel López Velasco in Mexico, Lasantha Wickrematunge in Sri Lanka and Nabil Al-Sharbaji in Syria — to raise awareness about ongoing attacks against the news media.

Organizers say 1,400 journalists have been killed doing their job since 1990, and 86% of those murders remain unsolved.

López Velasco was killed, along with his wife and son, in 2011 after writing about corruption and the drug trade in Mexico.

Mexico's Foreign Affairs Ministry did not immediately respond to a request for comment on the ruling. Mexico is trying to update its mechanism to protect journalists and the federal government insists that there will be no impunity, but press organizations point out numerous failures to prevent new attacks or to achieve justice.

In Mexico, López Velasco's son Miguel, alongside representatives of the press-freedom groups, read part of the verdict in a public event in the Gulf Coast state of Veracruz. Then they visited the newspaper where López Velasco worked, Notiver, to give journalists there a copy of the judgment.

Wickrematunge was killed while driving to work in 2009 after writing about Sri Lanka's government corruption and criticizing the then-government's alleged human-rights violations during a civil war with the ethnic Tamil rebels. The government vowed to investigate but the case remains unresolved.

Al-Sharbaji, who wrote for a news website early in Syria's civil war, died in a military prison in 2015. The Syrian government typically does not comment on security matters and has said nothing about al-Sharbaji's fate.

The tribunal provided a list of recommendations to the United Nations to ensure the safety of journalists in the course of their work, calling on states to investigate crimes against the media and civil society organizations to work on behalf of a free press.

Such "people's tribunals" have been set up previously in cases where victims have little or no access to other forms of legal redress.