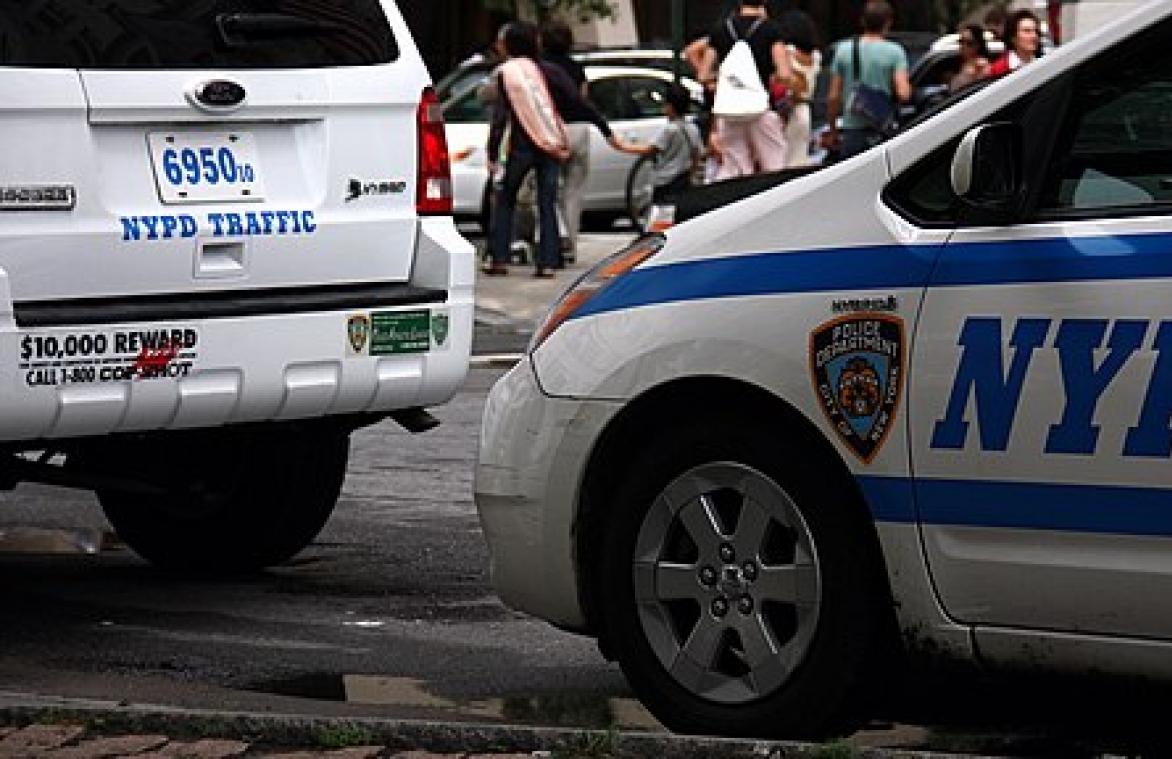 A New York taxi driver claimed he was arrested after a traffic stop in retaliation for his recording the officer with his cell phone. The judge recognized that the driver was engaged in a First Amendment-protected activity, but found that the officers had probable cause to make the arrest anyway. (Photo of New York Police Department cars from NYPD Traffic via Wikimedia, CC By 2.0)

A taxi driver, whom police stopped and later strip-searched, could not establish a First Amendment retaliatory-arrest claim, a federal magistrate judge in New York has ruled. The court ruled instead that the officers had probable cause to stop the driver for traffic violations.

In April 2014, Damon Wheeler was driving his own vehicle as a taxi in Middletown, N.Y.  Around midnight, two officers noticed that Wheeler’s vehicle did not have operating headlights.  The officers conducted a traffic stop. One of the officers, Ahmed Artola, informed Wheeler that his headlights were off and his license-plate light was not working.

Taxi driver begins to record officers with his cell phone

At some point a dispute ensued between the two men. Wheeler attempted to roll up his window and refused to exit the vehicle.  As Wheeler rolled up the window with Artola’s arm on the window, Artola punched Wheeler in the face. At his point, Wheeler used his cell phone to record part of the encounter.

Later, Artola and another officer forcibly removed Wheeler from the vehicle and searched it. They found crack cocaine in the vehicle.

Wheeler later sued Artola and the other officer for a variety of constitutional claims, including false arrest and excessive force under the Fourth Amendment and a First Amendment retaliatory-arrest claim.

In his First Amendment retaliation claim, Wheeler asserted that the officers arrested him in retaliation for his protected speech in arguing with the officer and taking a cell phone video of the encounter.

The case presented to a three-day bench trial in July 2019.  A bench trial is a trial before a judge, only without a jury.

On Sept. 23, 2019, U.S. District Court Magistrate Judge for the Southern District of New York Lisa Margaret Smith, who presided over the trial, issued a written ruling in favor of the defendant officers in Wheeler v. Artola.

On the First Amendment retaliation claim, Smith assumed arguendo that Wheeler engaged in First Amendment-protected activity when he argued with Artola and took his cell-phone video.  However, Smith still ruled in favor of the defendants, because the officers had probable cause to effectuate an arrest.

In Nieves v. Bartlett (2019), the U.S. Supreme Court held that a plaintiff pursuing a retaliatory-arrest claim must show that the arresting officers did not have probable cause. Judge Smith concluded that “Artola had probable cause for the traffic stop based on Wheeler’s commission of traffic violations and under New York state law, it is clear that a traffic offense can be a basis for an arrest.”

In Nieves, the Supreme Court created an exception for the no-probable-cause requirement in retaliatory-arrest cases. A plaintiff can proceed with their retaliatory arrest claim even when the officers have probable cause if they can show otherwise similarly situated individuals who did not engage in the same First Amendment-protected activity would not have been arrested.

Wheeler tried to fit within this exception. He argued that the officers arrested him for minor traffic violations, infractions for which most people are not arrested. However, Smith found that Wheeler failed to provide any evidence that similarly situated individuals who committed similar traffic violations were not arrested. She concluded that “he did not demonstrate that he fell within the exception to the requirement that he prove the absence of probable cause for his arrest.”