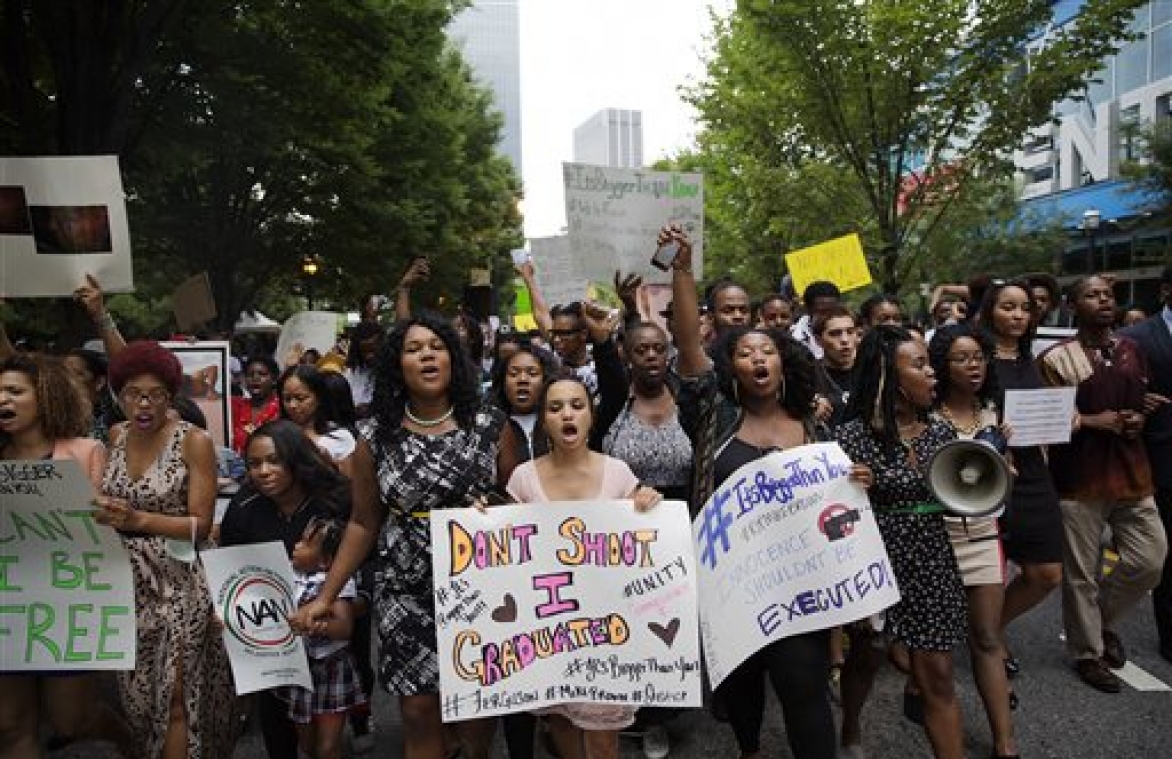 Marches and protests broke out in cities across the country in 2014 after a black unarmed man was fatally shot by police in Ferguson, Missouri. At one of those protests in Atlanta,  police arrested Corey Toole, who was both protesting and filming police during the protest. This photo shows the march in Atlanta. Toole filed a lawsuit, alleging his First Amendment rights were violated. An 11th Circuit Court of Appeals panel recently denied a request by police for qualified immunity, meaning Toole's lawsuit can go forward. The panel emphasized that Toole had a First Amendment right to both protest and to film police. (AP Photo/David Goldman, used with permission from The Associated Press.)

The case arose out of a protest in downtown Atlanta after a grand jury refused to indict the police officer who shot and killed Michael Brown in Ferguson, Missouri.  The Atlanta Police Department (APD) used a “leapfrogging” technique to block off the protesters’ route, which involved closing streets on a rolling basis to minimize traffic interruption rather than to shut down the protest entirely.

Man filming police during protest was arrested for disorderly conduct

However, Aaron Zorn, a sergeant with the APD, arrested Toole for disorderly conduct.  Zorn contended that Toole refused to comply with the request to get off the street and onto the sidewalk.

Toole sued the APD and Zorn, alleging a violation of his Fourth Amendment right to be free from unreasonable searches and seizures and his First Amendment right to freedom of speech.   Zorn argued that he was entitled to qualified immunity, a doctrine that protects government officials from liability unless they violated clearly established constitutional law principles.

On appeal, a three-judge panel of the 11th U.S. Circuit Court of Appeals affirmed in its December 26, 2019, decision in Toole v. City of Atlanta.   The appeals court noted that at this stage of the proceeding, it has to take factual inferences in favor of the non-moving party – the party not moving for summary judgment – Toole.

The 11th Circuit panel emphasized that “the predominant intent of Toole’s presence at the scene was to exercise his First Amendment right to protest and film police conduct.”   The appeals court also noted that such activities – “protesting and filming police conduct” – are constitutionally protected activities.

The 11th Circuit concluded: “Reading the facts in Toole’s favor, he was unlawfully arrested without probable cause while engaging in protected First Amendment conduct – protesting and filming police activities – specifically to stop him from doing so.”  Thus, the appeals court reasoned that Zorn was not entitled to qualified immunity.